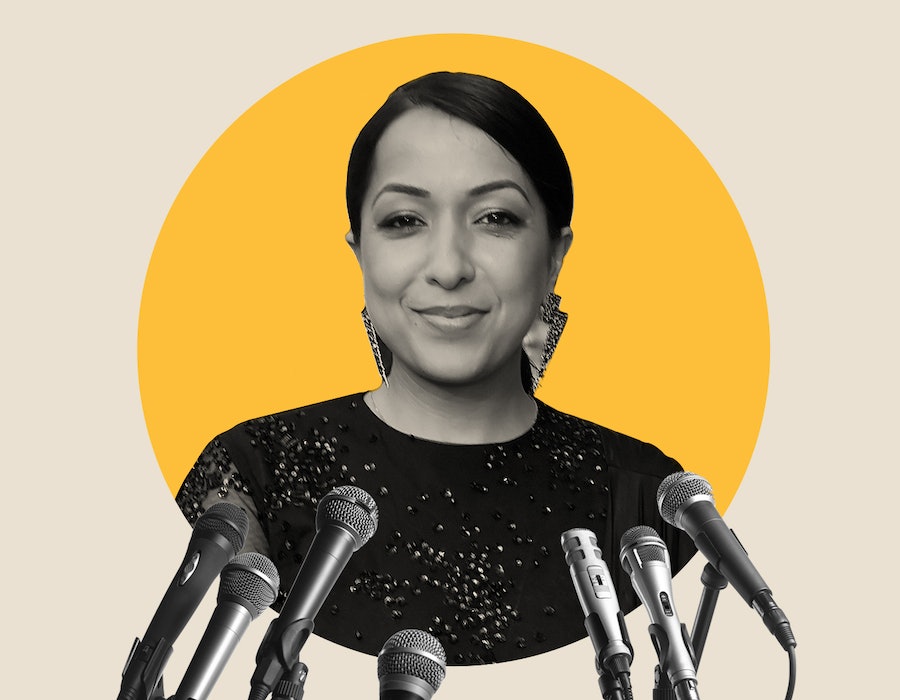 In Bustle’s Quick Question, we ask women leaders all about advice, from the best guidance they’ve gotten to what they’re still figuring out. This week, sidle up to Ms. Marvel executive producer Sana Amanat.

When Ms. Marvel premiered on Disney+ last month, the series gave MCU fans their first-ever Muslim superhero in a solo show: Kamala Khan, a Pakistani American teen who’s extremely aware that it’s never “the brown girls from Jersey City who save the world” — at least, until she slips on her great-grandmother’s cosmic bangle. The story comes via Sana Amanat, who co-created the comic in 2014 and now executive produces the series. Amanat drew inspiration from her own New Jersey upbringing for Ms. Marvel, which is already a hit among Gen Z and viewers of color and is ranked best of all the Disney+ Marvel shows.

“[Superheroes] are quirky, funny and relatable, but at the same time they’re bequeathed with an immense amount of power, and they have to decide what to do with it,” Amanat, who edited a number of the Hawkeye, Captain Marvel, and Daredevil solo comics, tells Bustle. “I’ve always gravitated toward storytelling [with] the unlikely hero. As a minority, I really relate to that.”

Before joining Marvel in 2009, Amanat worked in magazine publishing and at an indie comic book company. “It’s been a very random career,” says the executive, who’s 40. “But I feel like I’m the type of person who’s just tried things and said yes to opportunities.” At Marvel, she’s helped bring in authors like Ta-Nehisi Coates, swapped out Captain Marvel’s slinky leotard for a much more practical MCU suit, and eventually transitioned from junior editor to television producer. “I love it here, I do. I have no social life, but I love it,” she laughs. “I want to keep producing, and eventually probably write and showrun more full time, depending on where Marvel takes me.”

Below, she talks about the best advice she’s ever gotten and working through impostor syndrome.

The comic book field is generally viewed as white and male. When you first started out, did you worry your voice wouldn’t be heard or that you’d have to compromise it?

Until I got into the industry, I wasn’t thinking about how different I was from everybody else, [but then] going to events, it was very white and very male, and that was a challenge because I wasn’t sure if I really belonged. But I had people supporting me, saying, “You’re supposed to be here. You have a distinct voice and talent. You’re going to help change comics because you have a different story to tell.”

I’ve had those champions in my corner, a lot of [whom] have been white men. I almost quit years ago. I remember one of my old bosses, MacKenzie Cadenhead, used to be like, “If you decide to have a long career [at Marvel], you can have it.” That was, like, 13 years ago.

What appealed to you about storytelling in graphic novels compared with magazine publishing?

I love the characters, I love what [they] represent, and the collaboration with a writer or artist is pretty amazing. Like, you come up with an idea and a couple of weeks later you see a version of it, whether it’s written or drawn. It’s a lot of “What do you think?” and forming an idea together until it becomes better and better.

What does a typical day look like for you at Marvel?

It depends. When I’m in production, it’s absolute insanity. Waking up at whatever time to get on set, whether it’s a day shoot or a night shoot. If we’re in post-production, it’s mostly sitting with the editor and reworking the episode to make sure the episode makes sense. Every day is a little different, but every day is crazy. I’m looking forward to a break because [I’ve spent] two years on this project.

A lot of the time it’s very hectic and nonstop, so I try to make sure I have a little bit of a mental check, even if it’s just five minutes of like, “OK, what’s what’s going on today? How do I make sure the day is organized?” [I try to take] a moment for myself, whether that’s doing some quick meditation or stretches. Then I look through my emails, and catch up on phone calls on the way to the office or set.

How many hours on the clock are we talking?

Very intense, but very gratifying when it’s all done.

Be patient, stick to your gut, and believe in the things you know to be true. When I’ve had challenges, there’s often been a level of “Can I do this? Am I talented enough?” And then [I remember] people, whose opinions I value, telling me, “You’ve gotten to where you are because of your talent and because you stuck to your instincts.” I know it sounds cheesy, but believe in yourself and your abilities.

I think that’s especially true for young women of color with impostor syndrome. Saying “believe in yourself” is actually kind of revolutionary.

Oh, my God, 100%. I’ve had impostor syndrome for most of my career. If you’re a woman of color, and you’re where you are, it’s because you've accomplished it. No one’s doing any favors for us.

Do you have any advice for young women who are interested in breaking into comics?

Try to understand what avenue you want to go down, [such as being] a writer, artist, or working in production. There are so many fields. Then have conversations with people who are doing what you want to do, and get any job within that field. I worked my way up. Do a good job, be respectful, on time, and take advantage of the small opportunities you’re given — even if it’s “Hey, can you organize these scripts for me?” Build relationships that make people want to get to know you more and be around you.

What would you say to creators of color who worry their perspective isn’t universal enough?

Move past that as quickly as possible. [Society] is changing. I got pulled into production and development because Kevin Feige called me one day and was like, “It would be great if you can come and join for this project. You have something valuable to add here.” So that is what people are looking for. It exists, and your voice is valuable.

Find a mentor or someone you can rely on [to] give feedback and be honest with you. That’s incredibly helpful. I have a few people I can call at any point and be like, “I just need a gut check here.” We’re all human, and we get so obsessed with career and moving up. You need people to help ground you.

More like this
How This Founder Inspired A New Wave Of Drinking
By Jordan Murray
At 14, Tatiana Maslany Was Obsessing Over Tamagotchis & The Spice Girls
By Gabrielle Bondi
At 14, D'Arcy Carden Was Sneaking Out To Parties & Crying Over Kurt Cobain
By Ivana Rihter
Christina Perri Had No Idea Her 'Twilight' Song Is On YouTube's Top 100 Chart
By Radhika Menon
Get Even More From Bustle — Sign Up For The Newsletter