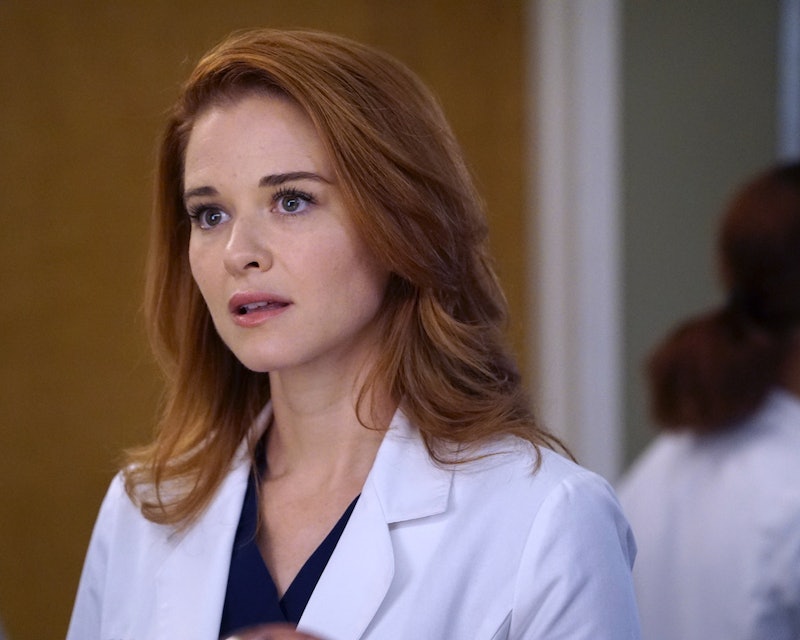 Ever since Dr. April Kepner hung up her scrubs on Grey’s Anatomy in 2018, fans have been clamoring for her Grey Sloan Memorial comeback. Now their wish has finally been granted: Sarah Drew is returning to Grey’s Anatomy, Deadline reported on Friday, March 12. The only catch? It will just be for a guest appearance in an upcoming Season 17 episode.

The official Grey’s Twitter account shared the news the same day, writing they are excited to have Drew back on set. “Me tooooo!!!!” the actor replied. Of course, they’re not the only ones. “YAYYYYYYYYYY!!!!!!!!!!!!!!!!!!!!!! We love @sarahdrew,” Camilla Luddington, who plays Dr. Jo Wilson tweeted, along with 17 red heart emojis, to which Drew — who now has a recurring role on Freeform’s Cruel Summer — responded, “Love you so much @camilluddington!!!!”

April’s exit following the Season 14 finale certainly left the door open all along. As fans may recall, the attending trauma surgeon character, whom Drew played for nine seasons, married Matthew (Justin Bruening) and quit her job at Grey Sloan. Because April and Jackson (Jesse Williams) share a daughter, however, she was never fully out of the picture.

Drew, for one, did sow some doubt about April potentially returning to Grey’s, however. “I have said goodbye to April and put her to rest,” she told The Hollywood Reporter in 2018. “I would be perfectly happy not being April again. I don’t feel a particular urge to play her any time soon. I love that character.” In the same interview, she also explained that she was unsure if she could continue watching the ABC medical drama out of fear it would be painful “watching [her] family go on without” her.

Around the same time, Drew echoed those sentiments in an interview with Entertainment Tonight, adding, “I really do feel like I said goodbye to her, and it was an epic farewell, a beautiful farewell, and I did feel like I closed the door on my life as April Kepner, but those people are my family, that community is my family, so I’m certainly not saying, ‘No.’”

In a season that’s already marked the epic returns of Patrick Dempsey's Derek Shepherd and T. R. Knight's George O'Malley in dream sequences on Meredith’s beach, more Grey’s alums could be joining her as well. Showrunner Krista Vernoff recently teased to Deadline that “chances are good you’ll see other people on the beach.” Plus, Grey’s fans also have another Dempsey appearance to look forward to in the March 18 episode.

Though actor Giacomo Gianniotti’s Dr. Andrew DeLuca just died in the shocking March 11 episode, viewers can even expect to see him again this season. “Over the course of these 17 seasons, we’ve had a lot of characters leave, whether their character exited for some reason or whether they died on the show, and we continue to see those people,” Gianniotti teased to Deadline. “Just because DeLuca has died, it doesn’t mean that there’s not other ways for us to see clips and other manifestations of DeLuca in the future.” Not leaving it to speculation, Vernoff confirmed that DeLuca does appear in more episodes this season.

It goes without saying that no goodbye is permanent in the Grey’s universe, and fans are ready for Drew to join the ranks of returnees.

More like this
A New 'And Just Like That' Table Read Pic Confirms A Key Character's Return
By Jack Irvin and Grace Wehniainen
Nicola Coughlan Shared A Lady Whistledown Excerpt From ‘Bridgerton’ Season 3
By Grace Wehniainen, Alyssa Lapid and Sam Ramsden
'Grey's Anatomy's New Intern Got Advice From Dr. Bailey Herself
By Grace Wehniainen
Everything To Know About 'RHONJ' Season 13
By Brad Witter and Jake Viswanath
Get Even More From Bustle — Sign Up For The Newsletter