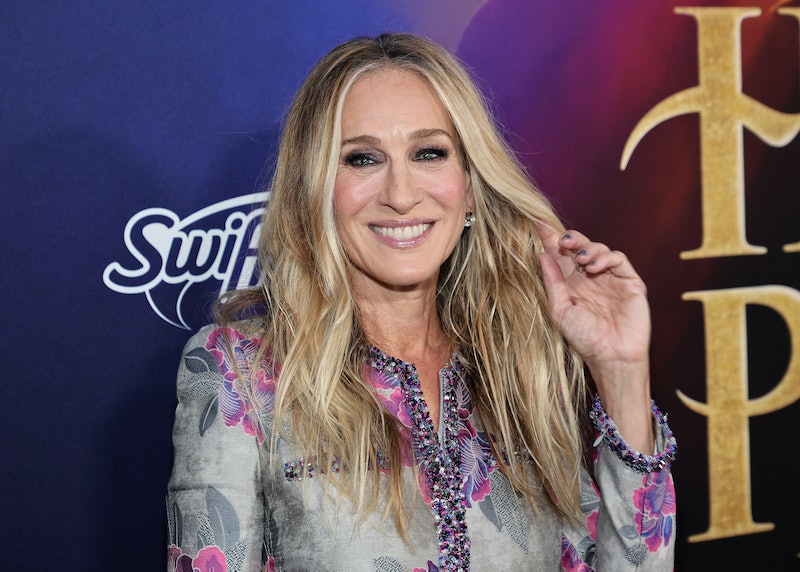 Is anyone else planning to celebrate Halloween with the Sanderson sisters? Watching Hocus Pocus has become something of an All Hallows' Eve tradition for many ’90s kids who appreciate a side of eccentricities with our magic spells. Now with Hocus Pocus 2 streaming on Disney+, you can make it a double feature. But in the wake of the new film, fans are noticing a resurfaced clip from 2018 where Sarah Jessica Parker claims that she doesn’t really remember filming the first movie.

During an appearance on The Late Show with Stephen Colbert on Oct. 30, 2018, Parker paid homage to that year's All Hallow's Eve with a witchy stroll down memory lane. "I don't have a lot of memories," Parker told the host, half-jokingly. Continuing, the Hocus Pocus star said she doesn't remember "what the movie's about as much," though she does remember "the filming of it." So, to recap, Parker turned the clocks back roughly a quarter-century.

On Twitter, one fan resurrected her comments with screen grabs from her visit to the late-night show. “Once again thinking about sarah jessica parker’s memory of hocus pocus,” the tweet read accompanied by the images with captions from the interview. Twitter user @cottoncandaddy’s tweet also made its way to Instagram in the form of a meme.

Sarah Jessica Parker's memories from the Hocus Pocus set, as reported by Entertainment Tonight, also suggest things were about as wacky behind the scenes as they eventually came to be onscreen. (For those wondering just how wacky we're talking here, one involves reading a newspaper while suspended in mid-air.)

Chronicling what sounds like a particularly memorable series of incidents from the Hocus Pocus set, the actor zeroed in on one particularly iconic facet of the early '90s film that most fans will probably remember, too — the broomstick sequences. Which, unsurprisingly, were some of Parker's favorite scenes to film. During the 2018 Late Show appearance, she told Colbert that she loved filming those flying scenes almost as much as Hocus Pocus audiences loved watching them.

As ET noted in its report, the Sanderson sisters' fictional flying capabilities were, in reality, made possible by a series of harnessing mechanisms presided over by the Hocus Pocus crew. "They'd call 'cut' and they'd go to lunch or maybe they'd change the lens, and I'd just stay up there," she remembered of the film's crew.

And while it's certainly amusing to imagine what the actor must've looked like, suspended above the set while the crew takes five, Parker told Colbert she kept busy in the interim. In fact, she passed the time with some light reading: "I found that the harness was comfortable, so I would just sit up there and read the Times while people took their breaks or changed the camera and sometimes went to lunch."

Now, remember, these were the pre-smartphone days, which means Parker wasn't scrolling the Times' newsfeed from her iPhone app during filming. Luckily, "I could fit an entire New York Times up the back of the corset," the actor said. Seriously, is there anything this woman can't do? Next time you're watching Sarah Sanderson's interpretive broomstick jig, just know that Parker might've just briefed herself on the day's news immediately beforehand. Not the most traditional means of getting into character, that's for sure. But hey, however Parker got herself there, it definitely worked.

For those especially dedicated Hocus Pocus fans, chances are, the next time they'll watch Parker's epic broomstick shenanigans probably won't be too long from now. After all, most everyone who watched the 1993 Halloween classic growing up tends to circle back to the Sanderson witches (and their delightfully silly plight for eternal youth) at least once a year, preferably in celebration of October's hallowed holiday.

During the interview, Parker also attempted to recall the plot: "Three witches, I’ve been told that, and apparently my character’s not very bright. But I fly and sing and I think I like to suck the life. I think I like to kill children? I don’t know."

If anyone else needs a refresher, both films are streaming now on Disney+.

More like this
Jodie Turner-Smith & Joshua Jackson's Relationship Timeline Includes Her Proposing
By Jake Viswanath
17 Photos Of The 'Wednesday' Cast Vs. The 1991 'Addams Family' Cast
By Grace Wehniainen
Shania Twain Replaced Brad Pitt’s Name In “That Don’t Impress Me Much” At The PCAs
By Jake Viswanath
Kim Cattrall Had A 'Sex And The City' Reunion With Creator Darren Star
By Grace Wehniainen
Get Even More From Bustle — Sign Up For The Newsletter

This article was originally published on Oct. 31, 2018