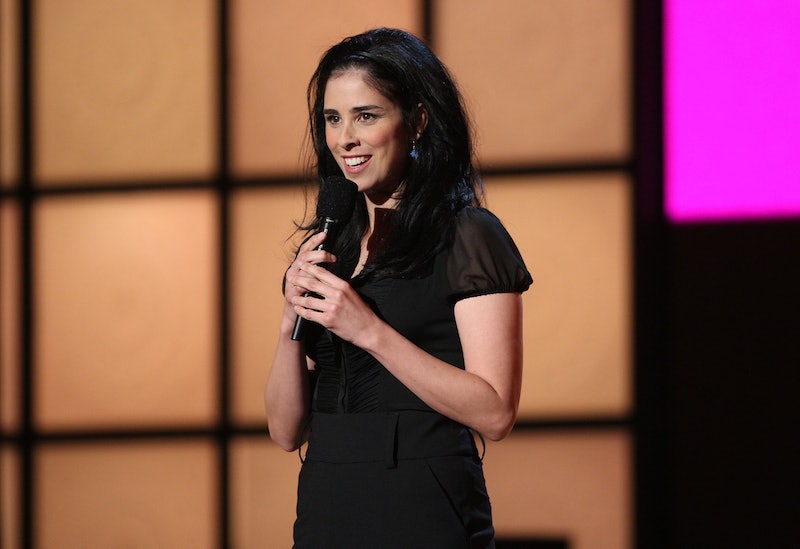 After the premiere of The New York Times Presents: Framing Britney Spears documentary, fans are re-examining everyone who took digs at the pop princess throughout her career — and no one is getting away unscathed. Sarah Silverman responded to backlash over her Britney Spears roast at the 2007 MTV Video Music Awards, which happened just minutes after the singer's now-infamous "Gimme More" performance. It was Spears' first time back on the stage after a series of public incidents amid her custody battle and divorce from Kevin Federline, and Silverman's comments didn't age well.

As the clip resurfaced on Twitter, one user tagged Silverman and asked her to "explain herself." The comedian responded by saying that she was known for doing roasts back then. "MTV asked me to mini-roast Britney after her big performance," she said, also putting the network at blame. "While she was performing I was having diarrhea & going over my jokes. Had no idea she didn’t kill. Unfortunate. Art changes over yrs as we know more & the world changes."

In a follow-up tweet, Silverman said she regretted the jokes but stopped short of an actual apology. She also questioned the Twitter user's intentions in sharing the clip. "I wish I could delete it but I can’t," she said. "But you are posting it for people to see. So r u trying to be kind or right?"

Silverman's week is going the exact opposite of another comedian that has gone viral in the wake of the doc. Spears fans are praising Craig Ferguson after a 2007 monologue from The Late Late Show resurfaced. In the clip, he criticized comedy that aims at vulnerable public figures and refused to mock Spears in light of her situation. "For me, comedy should have a sentiment of joy in it," he said. "It should be about artists attacking the powerful people... So tonight, no Britney Spears jokes. This woman has two kids. She's 25 years old. She's a baby herself."

Since the premiere of Framing Britney Spears, public figures including Spears' ex-boyfriend Justin Timberlake and Diane Sawyer have been criticized for contributing to sexist media narratives and causing hardships in Spears' career and personal life, which ultimately led to the controversial conservatorship.

More like this
Ed Sheeran’s Surprise Gig Included An Iconic Britney Spears Tribute
By Bustle Editors and Darshita Goyal
Netflix Reveals First Look At Wednesday In The 'Addams Family' Spinoff Series
By Bustle Editors
A New 'And Just Like That' Table Read Pic Confirms A Key Character's Return
By Jack Irvin and Grace Wehniainen
Everything To Know About Taylor Swift’s 10th Studio Album, 'Midnights'
By Grace Wehniainen and Jake Viswanath
Get Even More From Bustle — Sign Up For The Newsletter