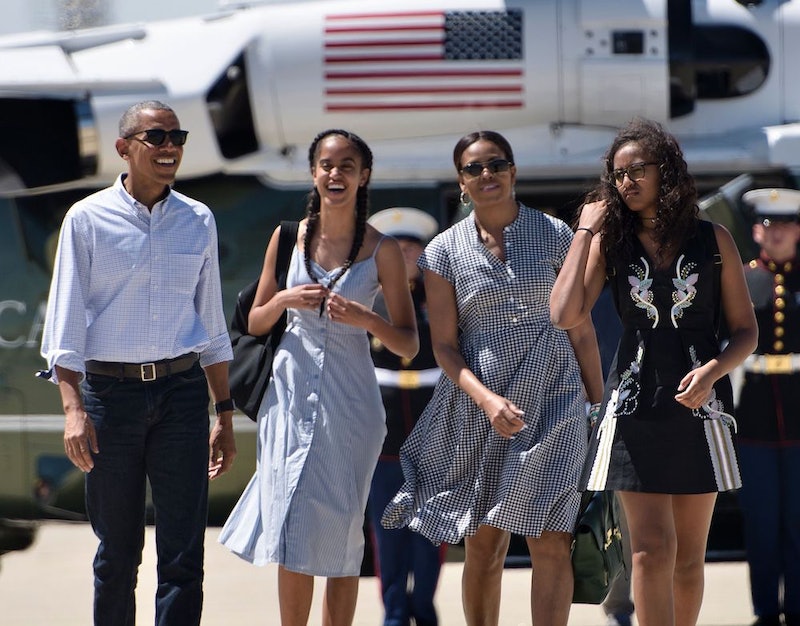 Former first daughters Sasha and Malia Obama attended demonstrations amid the nationwide Black Lives Matter rallies over the summer. The revelation comes from a reliable source: Barack Obama himself. In a Nov. 24 interview with People, the former president revealed his daughters were in "organizer mode" following the deaths of George Floyd, Breonna Taylor, and countless other Black people killed by police.

"They had a very clear sense of what was right and what was wrong," the former president (and proud dad) told the magazine, adding that they decided to join the rallies of their own volition. "Malia and Sasha found their own ways to get involved with the demonstrations and activism that you saw with young people this summer, without any prompting from Michelle and myself, on their own initiative," he said.

Obama also said the college students were "very much in organizer mode," adding that he could not have been more proud of the work they were doing to combat racism in America. And though he does not foresee his children ever entering the world of politics, the former president maintained that Sasha and Malia will be active citizens who are "in it for the long haul."

"They're reflective of their generation in the sense they want to make a difference, and they think about their careers in terms of: How do I have a positive impact? How do I make the world better?" the former president said, noting that their paths will likely differ from each other.

He then marveled at younger folks' role in activism compared to older generations "And these kids are really focused on: How can I do something that I find meaningful that resonates with my values and my ideals?" He continued, "And that I think is an encouraging sign for the country."