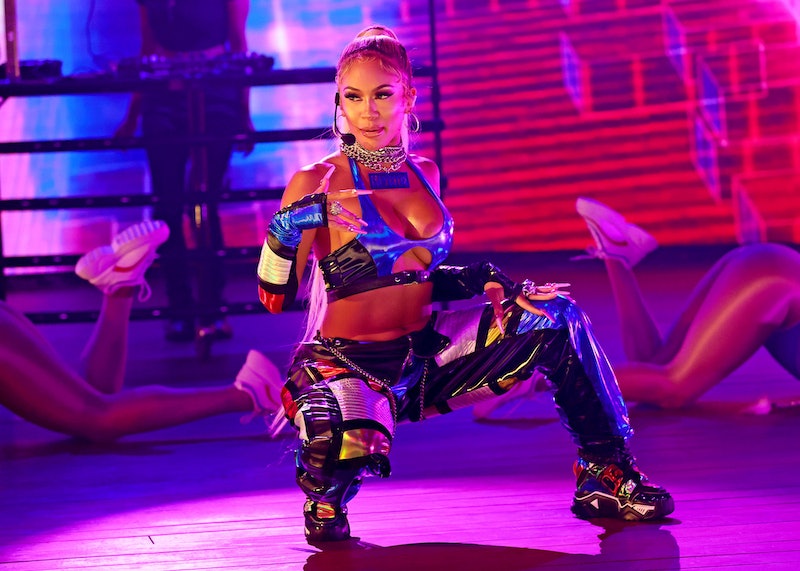 Saweetaween arrived with an extra special treat this year. Before debuting her 2021 Catwoman Halloween costume, Saweetie recruited Halle Berry for her Friday, Oct. 29 social media video reveal. Wearing a purrfect recreation of Berry’s look from the campy 2004 Catwoman movie, the “My Type” rapper is seen strutting across a rooftop while lip-syncing the Oscar winner’s actual on-screen dialogue: “You see, sometimes I’m good. Oh, I’m very good. But sometimes I’m bad — but only as bad as I want to be.”

Cue the record scratch, as Berry appears in the doorway to ask, “What the hell is going on here?” After Saweetie replies that she’s “just trying to get out here and get these coins,” an “intense stare down” ensues, before Berry eventually breaks. “I know dat’s right,” she comically says, borrowing a popular phrase from the singer, who adds, “and never ever wrong.” The leather-clad star then springs into action somewhere off camera.

“Had to put on for the best Catwoman to ever do it,” Saweetie captioned her post, while Berry also shared the video, adding that “there’s enough room for more than one Catwoman,” along with the “IKDR” hashtag. In less than 24 hours, the women’s Instagram videos cumulatively racked up more than 1.25 million likes, including those from fellow celebrities Jennifer Aniston, Gal Gadot, Lori Harvey, Yvonne Orji, Lil’ Kim, Tiffany Haddish, Cassie, Karrueche Tran, and Chloe Bailey. Among the thousands of commenters were Normani, Jennifer Hudson, Lee Daniels, and Taraji P. Henson, who wrote, “LOVE THIS SOOOOOOOO MUCH!!!!!!!!!,” adding heart, flame, and lip emojis.

Berry’s Catwoman character, which earned her the 2005 Worst Actress Razzie that she gamely accepted in person, seems to be experiencing a revival of sorts, just under two decades after making her big-screen debut in the widely panned DC superhero movie. During her Razzies speech, Berry joked — while clutching her 2002 Monster’s Ball Best Actress Oscar — that she wanted to thank Warner Bros. for “this piece-of-sh*t, God-awful movie.”

She seems to be getting her flowers now. The 2004 film’s arrival on HBO Max, coupled with the upcoming release of The Batman, which will introduce Zoe Kravitz as Catwoman, has inspired fans to create rankings of actors who have played the iconic comic book character over the years. (Other such stars include Eartha Kitt, Michelle Pfeiffer, and Anne Hathaway.) “I’m seeing all the Catwoman love, everybody,” Berry tweeted on Oct. 25. “Where were you guys 17 years ago?”

Don’t expect her to slip back into her iconic catsuit, though: Berry recently told Variety that she would “probably not” reprise the role in the future. “I think I’m good,” the actor said with a laugh.

Meanwhile, only time will tell if Saweetie will gift fans with more iconic Halloween lewks in the coming days. Last year alone, she celebrated Saweetaween by dressing up as Beyoncé, Kelly Rowland, and Michelle Williams to recreate Destiny’s Child’s “Bootylicious” single art, in addition to transforming into RuPaul and Mystique from X-Men. While recently teasing her and Berry-inspired Halloween costume to Bustle, the rapper hinted, “I think it might be able to top last year’s. It’s gonna be [hot].” IKDR.