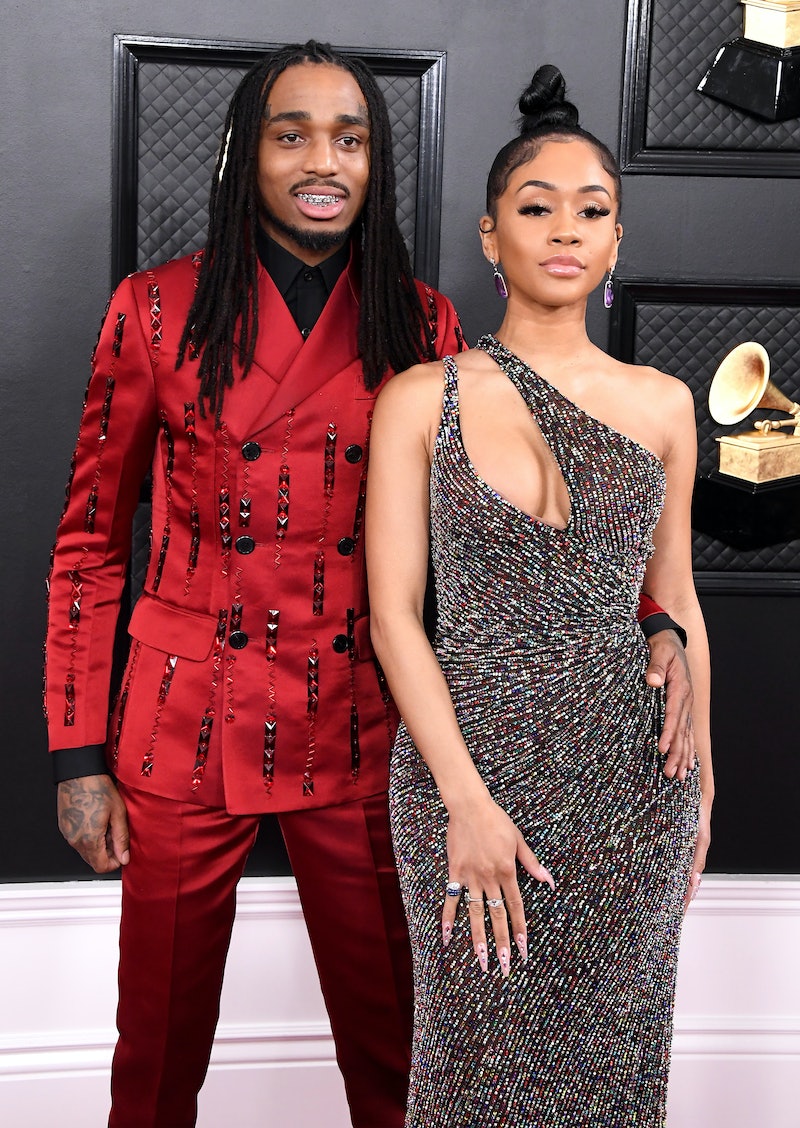 It turns out that Quavo wasn’t Saweetie’s type after all — and she was more than willing to share the reason why. After announcing that she’s now “single,” Saweetie addressed her breakup with Quavo and indicated that their two-year relationship ended due to infidelity on his part. The Migos rapper had his own side of the story to share, however, and the two ended up trading pointed tweets.

“I’ve endured too much betrayal and hurt behind the scenes for a false narrative to be circulating that degrades my character,” the “My Type” rapper tweeted on March 19. “Presents don’t band aid scars and the love isn’t real when the intimacy is given to other women.”

Although Saweetie didn’t reveal when the split or alleged infidelity occurred, she added in a separate tweet that she “emotionally checked out a long time ago” and “walked away with a deep sense of peace and freedom.” (They last posted Instagram photos together during Valentine’s Day weekend.) The musician concluded by writing that she’s “excited for this new chapter of elevation.”

For his part, Quavo addressed the split in his own series of tweets, hours later. “I know you want to make this into a show so I’ll play my part just this one time,” the Migos rapper wrote, presumably in response to Saweetie’s tweets. He explained he doesn’t normally “put [his] business out there,” but felt “the need to address this so there are no false narratives.” He continued, “I had love for you and disappointed you did all that. You are not the woman I thought you were. I wish you nothing but the best.”

Saweetie got the last word — or last two words — for now, though. “Take care,” she replied to Quavo’s second tweet.

Earlier this month, fans began suspecting the pair had split after they appeared to unfollow each other on Instagram, which ironically is the same social media platform that led to the rappers’ relationship (and a viral trend) in the first place. Quavo had previously revealed he “introduced” himself to Saweetie in March 2018 by sliding in her DMs with a simple snowflake emoji. The “Icy Grl” rapper, in turn, replied with a bowl of noodles emoji, a references to Migos 2018 track, “Stir Fry.” Quavo eventually followed up with: “u so icy Ima glacier boy.” And the rest was history.

Meanwhile, Saweetie shared with People in January that the instant attraction had been mutual: “I liked him before he even knew me. He was my only celebrity crush. I always thought he was fine. I liked his voice. I thought he was sexy.”

She also revealed what she believed to be the secret of their two-year relationship at the time. “I think the reason why we’ve lasted so long is because we’re like friends who are really, really, really attracted to each other,” Saweetie said. “I think that’s what keeps it fun. It keeps it different. We’re able to really just kick it. Like wherever, whenever.”

Now that she’s told Quavo to “take care” after his alleged “intimacy” with other women, that friendship is probably going to look quite different.

More like this
Kanye West Revealed The High Percentage Of Time Kim Kardashian Raises Their Kids
By Brad Witter
Gigi Hadid’s Dad Shared What He Knows About Those Leonardo DiCaprio Rumors
By Brad Witter
Who Is Nick Cannon Dating & How Many Kids Does He Have?
By Jordyn Tilchen and Radhika Menon
Justin & Hailey Bieber’s Relationship Is “Unbreakable” After Their Two Health Scares
By Bustle Editors
Get Even More From Bustle — Sign Up For The Newsletter