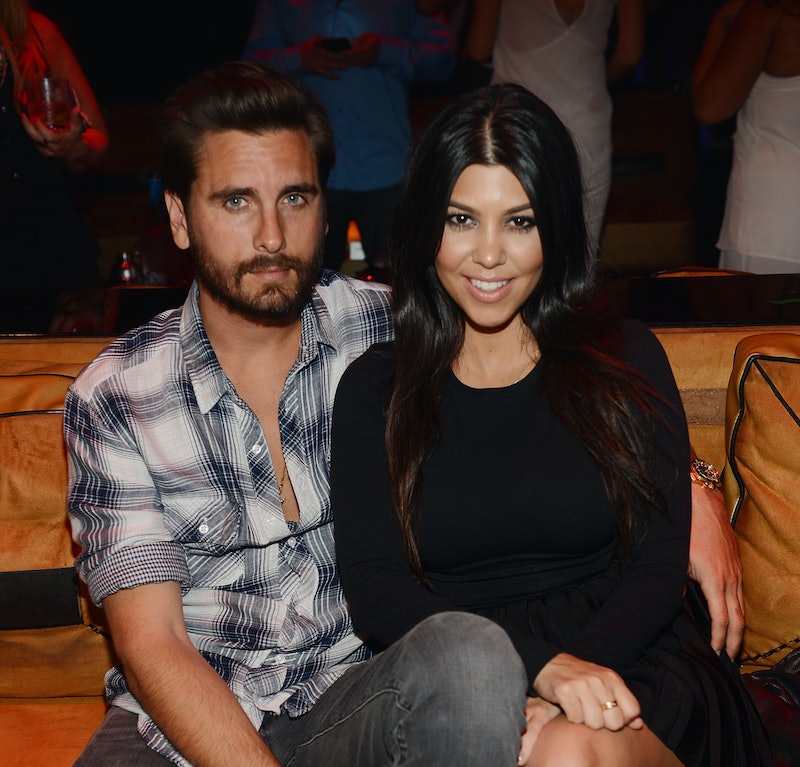 Don't give up on Scott Disick and Kourtney Kardashian's relationship quite yet. The final season of Keeping Up with the Kardashians is set to premiere on March 18, and Scott revealed in a brand new sneak peek that he would totally put a ring on it if Kourtney would let him.

In the clip, which was released on Thursday, Feb. 25, the famous family sits down for a meal and Kim Kardashian, Kris Jenner, Khloé Kardashian, and Tristan Thompson all encourage Scott to propose. "Kourtney and Scott, so when are you guys going to get back together?" Kim teases. But Scott's response makes it clear that their future is entirely up to Kourtney. "Wherever Kourt stands, I stand with her," he says.

In true Kourtney fashion, she seems totally unfazed by Scott's willingness to rekindle their romance roughly five years after their 2015 split. "That's nice," she responds. But given the former couple's extensive history and the fact that they share three children together (11-year-old Mason, 8-year-old Penelope, and 6-year-old Reign), longtime fans of the hit reality series would likely agree that they should get back together.

Scott, for his part, seems very serious about it, and he even doubles down on his feelings after Kourtney brushes him off. "Forever," he adds. Unfortunately, it seems that Kim is way more excited about Scott's remarks than her older sister is. "Could we just have a Kourtney-Scott wedding?" the Skims founder asks. "That would be epic."

Of course, Kris is totally on board with Kim's plan. "Scott, if you could just bring it within yourself to go over there and get on one knee and propose, we'll have the wedding," the matriarch says. "It'll be amazing — make my daughter respectable!" And while he doesn't quite pop the question, he does seem confident that they'll end up together in the long run. "I love you and I'm ready to marry you right here, right now," he says. "Kourtney knows that we'll eventually get married and live a good life."

Kourtney, however, doesn't seem as confident about their future, telling Scott that he needs to work on himself before they could ever move forward as a couple. "What else do I have to do?" he responds. "I would love to know what I can do." It's also worth noting that the two are currently dating other people, which further complicates things. Scott has been linked to 19-year-old Amelia Hamlin for several months now, and Kourtney is dating her longtime pal Travis Barker.

The reality star confirmed her relationship with Travis in a Feb. 16 Instagram post, which featured the pair holding hands. The photo came a few weeks after Entertainment Tonight revealed that their friendship turned into something more. "They've been friends and family friends for a very long time, but recently something sparked and their relationship has turned romantic," a source told the outlet. And while it's unclear if fans will get to see their relationship unfold on the final season of KUWTK, this new preview suggests that Travis might have some competition.