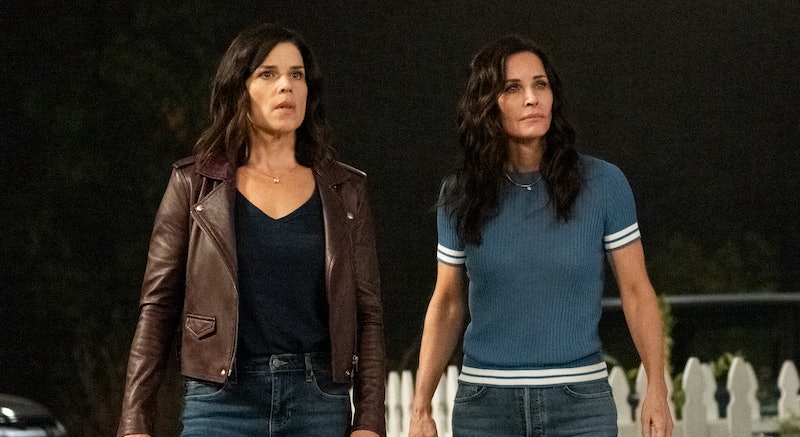 Scream 5 spoilers ahead. Wes Craven’s Scream revitalized the slasher genre with its meta take on a classic small-town killer story in 1996. The film introduced viewers to Ghostface, the masked murderer seeking to hunt Sidney Prescott (played by Neve Campbell) following her mother’s controversial murder in the fictional town of Woodsboro. With different characters assuming the role of Ghostface, the figure’s plot to kill Sidney — horror’s ultimate final girl — has since continued over four more films with a fifth sequel in the works.

Directed by Matt Bettinelli-Olpin and Tyler Gillett (Ready or Not), the series’ most recent installment, 2022’s Scream, welcomed a new generation of fans to the franchise and grossed more than $140 million worldwide. Following the sequel’s success and widespread critical acclaim, both the directors and Campbell expressed interest in creating future films, and Paramount Pictures officially greenlit the series’ sixth movie on Feb. 3.

Here’s everything you need to know about Scream 6, including its cast, plot, and release date.

Considering most of a Scream film’s cast doesn’t make it out alive, few actors from Scream 5 are likely to return for the next installment. In an interview with the Just For Variety podcast released March 15, Courteney Cox revealed she’ll reprise her role as journalist Gale Weathers in the sequel. “I got the script yesterday,” she detailed, per MovieWeb. “I haven’t read it yet; I just got it. I’m excited to read it, and they’re going to start filming ... I think in June in Canada.”

Per usual, Sidney was still standing at the end of Scream 5, so Campbell was expected to come back yet again, but now it’s become clear that she won’t be returning. “Sadly I won’t be making the next Scream film,” Campbell told Deadline on June 6, citing salary concerns. “As a woman I have had to work extremely hard in my career to establish my value, especially when it comes to Scream. I felt the offer that was presented to me did not equate to the value I have brought to the franchise.”

Campbell went on to thank those who have been watching her survive killers in five films, stating, “To all my Scream fans, I love you. You’ve always been so incredibly supportive to me. I’m forever grateful to you and to what this franchise has given me over the past 25 years.”

Despite Campbell not returning, there will be some new faces among the Scream 6 cast. Deadline exclusively revealed on June 16 that Jack Champion (Avatar: The Way of Water), Liana Liberato (If I Stay), Devyn Nekoda (Ginny & Georgia) and Josh Segarra (Orange is the New Black) would be joining the cast for the latest Scream installment.

Previously on May 10, it was announced that Melissa Barrera (Sam Carpenter), Jenna Ortega (Tara Carpenter), Jasmin Savoy Brown (Mindy Meeks-Martin), and Mason Gooding (Chad Meeks-Martin) would reprise their roles from Scream 5 for the sequel. Given that her character is still alive, Heather Matarazzo (Martha Meeks) could also make an appearance.

Also in May, it was announced that Hayden Panettiere will return for Scream 6, reprising the role of Kirby Reed for the first time since the fourth Scream movie. During Scream 5, eagle-eyed viewers noticed that Panettiere’s fan-favorite character was briefly featured on a computer screen within the film alongside a headline labeling her as a survivor of the Woodsboro killings, confirming longtime suspicions her character didn’t die in the 2011 movie.

After surviving the first four films, David Arquette’s friendly former police officer character Dewey Riley was finally stabbed by Ghostface, so if the actor returns, it’ll likely be in a flashback.

Two more cast additions were revealed on July 14: Ready or Not’s Samara Weaving and Spider-Man’s Tony Revolori, Deadline reports, though their characters have not been announced.

Bettinelli-Olpin and Gillett have been announced as directors for the sixth Scream film, with writers James Vanderbilt and Guy Busick attached. Vanderbilt, Paul Neinstein, and William Sherak will produce while Kevin Williamson and Chad Villella will return as executive producers.

Paramount Pictures revealed the film will be released on March 31, 2023. Since Cox claimed the cast will enter production in June, it seems the next Scream installment will come together quickly.

While the plot for Scream 6 is currently unknown, we can make a few predictions based on the end of Scream 5. In a twist for Cox’s character, Gale opted out of writing about the recent murders for her next book and instead penned a tribute to the late Dewey. Considering Gale’s work has given the killers notoriety in the past, it’s natural to wonder if her choice will have any impact on future terrors in Woodsboro. Scream murderers are notably fame-obsessed, however, so Gale’s decision could potentially have a negative impact.

The latest film also saw Sidney return to Woodsboro after years of living with her family in a safe, far-away location. But now that she’s made her presence known again, it’s likely Ghostface could see her as an easier target.

Scream 6 is expected to continue following Sam, Tara, Mindy, and Chad after experiencing the horrific events of Scream 5. If the upcoming sequel follows the franchise’s previously established tropes, don’t be surprised to see family members — or even the seemingly-good-hearted characters themselves — come out of the woodwork, put on a Ghostface mask, and grab a weapon.

This post will be updated with the trailer and additional plot details as more information on Scream 6 becomes available.

More like this
Before 'Bullet Train,' Revisit These Brad Pitt 'Fight Club' Premiere Photos From 1999
By Grace Wehniainen
Jennifer Coolidge Needs 'Legally Blonde 3' To Happen So She Stops Getting Hot Dog Jokes
By Jake Viswanath
Reese Witherspoon Gave Fans Hope For 'Legally Blonde 3' After This Surprising Movie Inspired Her
By Jake Viswanath
22 Movies On Netflix That Are Perfect For The Whole Family
By Bustle Editors
Get Even More From Bustle — Sign Up For The Newsletter

This article was originally published on March 18, 2022