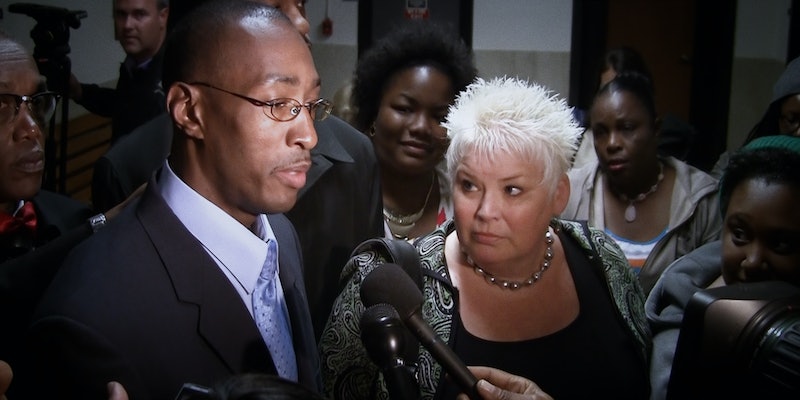 Netflix's new docuseries Trial 4 peers inside the case of Sean Ellis, a man who spent 22 years in prison for a crime he insists he did not commit. The Boston native was convicted in 1995 of first-degree murder for the 1993 shooting of police detective John Mulligan. But after three trials, he was eventually released in 2015. That's where the Netflix show picks up.

The details of Ellis' case are undeniably convoluted. Some time around 3:30 a.m. on Sept. 26, 1993, Mulligan was shot five times in the face while dozing in his SUV in a Walgreens parking lot. When Mulligan was found, his gun was missing and the driver's side door was unlocked. Eye witnesses claimed they spotted a Black man crouching next to Mulligan's SUV, and later saw the same man standing at a pay phone talking to another figure. Another witness also claimed they saw a car speeding away.

Six days later, Ellis' cousins were both murdered, and Ellis' ID was found alongside a pack of diapers in their apartment. While talking to police about his cousins' deaths, Ellis mentioned that his friend Terry Patterson drove him to Walgreens to buy the diapers, which happened to be around the time of Mulligan's murder. From that, the Boston Police Department concluded that Ellis and Patterson had killed Mulligan that night because they wanted his gun as a trophy.

There have been numerous issues with the case. The motive that Ellis and Patterson randomly killed Mulligan just didn't ring true for jurors. It was also revealed that the key witness, Rosa Sanchez, was personally related to the detective assigned to the case, and she later admitted that she had misidentified Ellis and Patterson. "The jury in the first two trials simply did not believe the police version of events," journalist Phillip Martin explained on WGBH Radio. The first two trials ended in hung juries, but Ellis was convicted in 1995 during his third trial by investigating detectives Kenneth Acerra, Walter Robinson, and John Brazil.

Shortly afterward, however, Robinson, Brazil, and Acerra came under investigation for corruption and robbing drug dealers. Acerra and Robinson were convicted of perjury and armed robbery in 1998. And in 2013, drug dealer Robert Martin confirmed during a testimony that Mulligan also robbed his apartment with Acerra and Robinson 17 days before Mulligan's murder. It was revealed through Anti-Corruption Unit files that the Boston Police Department was aware that they were all corrupt as early as 1991, but it did not make that information public. This prompted District Judge Carol Ball to finally release Ellis and order a fourth trial in 2015. That decision was affirmed by the Supreme Judicial Court in 2016.

Trial 4 is meant to follow Ellis as he prepares for the fourth trial, which was initially scheduled for mid-October 2018. But on Dec. 17, 2018, the Suffolk County District Attorney’s Office dropped all charges against Ellis. “My office today will file paperwork ending the prosecution of Mr. [Sean] Ellis for first degree murder and armed robbery,” said District Attorney John Pappas, per CBS News. He added that in addition to the corruption surrounding the case, foggy eyewitness testimony would be difficult to overcome. “The state of witnesses memory today, 25 plus years later, would present a tremendous challenge to us in a retrial,” Pappas said. Still, he said that Ellis is not exonerated and his conviction "remains undisturbed" in the eyes of the law.

Per the Justice for Sean Ellis website, Ellis' community helped him get back on his feet after his release. Church acquaintances provided him with housing while friends gave him a used car and funded his first driver's education course. He eventually got a job with Community Servings, a Boston non-profit agency that prepares and delivers meals to ill and elderly home-bound residents. In summer 2020, he was promoted to the management position of Development Associate and now works on the organization's funding and community outreach. The same summer, he was invited to join the Institute for Nonprofit Practice's Community Fellows Program. As for his personal life, Ellis said he's "never been happier or more stable" and has a wedding planned in 2021.

More like this
Here's What Jeffrey Dahmer's Dad Has Said About His Other Son, David
By Grace Wehniainen
Where Is The Bling Ring’s Rachel Lee Now?
By Arya Roshanian
Jeffrey Dahmer’s Arresting Officer John Balcerzak Got His Job Back After Being Fired
By Grace Wehniainen
Where Is Lionel Dahmer Today? Jeffrey Dahmer’s Father Reflected On The Serial Killer’s Death In 2020
By Brad Witter
Get Even More From Bustle — Sign Up For The Newsletter