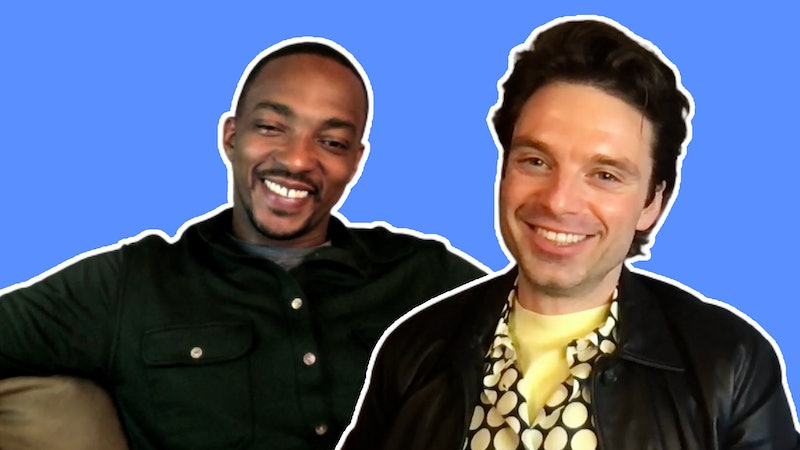 Sure, the Falcon and the Winter Soldier (aka Sam Wilson and Bucky Barnes) started out as Captain America sidekicks, but now they’ve come into their own with a new Disney+ series all to themselves. And true Marvel connoisseurs have kept a keen eye on the real-life friendship of Anthony Mackie and Sebastian Stan — which has a slightly spicier kick to it than say, an RDJ-Evans friendship. Unfortunately, Mackie has no interest in social media (apparently, it took no fewer than four people to persuade him to cross-promote the series on Stan’s Instagram), so we have to wait for press junkets to see these two interact.

So in everyone’s best interest, we poked the bear, quizzed them on their knowledge of each other, and got exactly the answers we could have never come up with ourselves: stories about Morgan Freeman punching Mackie, Mackie’s love of a Martha Stewart bed set, Stan running through (or away from) a crowd of people at the premiere, and how Mackie got his Screen Actors Guild (SAG) card without getting paid.

If you’re looking for a video that gives you some deep insight into this season of The Falcon and the Winter Soldier or the Marvel Cinematic Universe, this is probably not the video for you. But if you want to find out which boy band Bucky Barnes would love or watch two accomplished actors make fun of SAG pencil-pushers, then this is exactly the place you want to be.

The Falcon and the Winter Soldier premieres March 19 on Disney+.

More like this
Brendan Fraser's Emotional Critics Choice Awards Speech Is Total Tearjerker
By El Hunt
'Bling Empire: New York’ Star Dorothy Wang Wants To Try 'The Simple Life'
By Alyssa Lapid
At 28, Rosie Perez Risked Her Career To Stop Playing Stereotypes
By Gabrielle Bondi
At 28, Debra Jo Rupp Was Living A Much Different '70s Show
By Grace Wehniainen
Get Even More From Bustle — Sign Up For The Newsletter
From hair trends to relationship advice, our daily newsletter has everything you need to sound like a person who’s on TikTok, even if you aren’t.