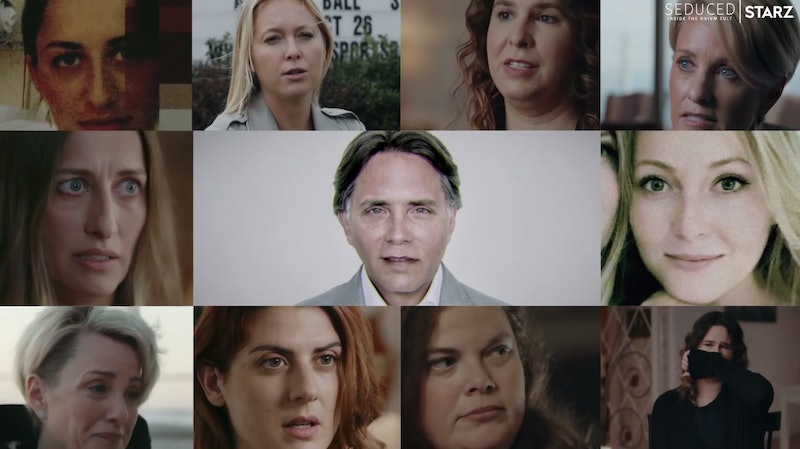 Over the last three months, two different docuseries have come out about NXIVM, the now infamous self-help organization led by Keith Raniere and later revealed to be a cult. In August there was The Vow, an HBO series that followed several former high-ranking NXIVM members through their decisions to leave the group and go public about its alleged abuse. And now there's Seduced: Inside the NXIVM Cult, a Starz docuseries that chronicles India Oxenberg's attempts to grapple with and heal from her time in NXIVM and DOS, a secret subsect of the group in which women in master-slave relationships were branded with Raniere's initials and allegedly coerced into having sex with him. (Raniere was recently sentenced to 120 years in prison on charges of sex trafficking, racketeering, and possession of child pornography, though he maintains his innocence and has said he plans to appeal his conviction.)

Both shows cover similar material, but their approaches are vastly different. So which one should you watch? Let's break it down.

How Long Are The Vow & Seduced?

Let's start with the basics: how much time you can expect to commit. The Vow is nine episodes and has a second season slated to release in 2021; Seduced is a four-episode limited series.

How The Vow & Seduced Portray the Culture of NXIVM

Watching the first episode of The Vow feels a lot like someone is trying to convince you to join NXIVM during the height of its popularity. There's a lot of uplifting music, positive but vague language about "building a better world," and video montages of adults smiling and doing team-building activities. This is clearly on purpose: it creates an idealized image of the group that attempts to explain why former senior NXIVM members like Sarah Edmondson and Mark Vicente, who are heavily featured in the series, ignored so many red flags. They describe how NXIVM appealed to their desires to do good in the world and achieve personal growth, then take viewers along with them as they begin to realize that NXIVM's true purpose was never self-betterment, but creating a group of people with unwavering loyalty and obedience to Raniere.

Seduced, on the other hand, immediately cuts to the dark heart of NXIVM. "That window is where... it happened," India says in the opening lines of the show, pointing to a generic-looking townhouse as she wanders NXIVM's former headquarters in Albany, New York. "I was the first woman in my group of slaves to be branded. The smell that came from the cauterizing pen burning my flesh was so intense that it filled up the entire townhouse."

The Starz docuseries continues on to deconstruct the idea that there was anything particularly "special" about the aims of NXIVM, illustrating the ways that Raniere and co-founder Nancy Salzman drew from existing multi-level marketing schemes, psychological practices, and neurolinguistic programming techniques to build the group. Catherine Oxenberg, whose quest to extract India from NXIVM is a large focus in The Vow, also lays bare the variety of ways that the organization worked to isolate, groom, and manipulate potential members from their very first introductory course — making a strong argument that DOS was not merely an awful side effect of NXIVM, but actually one of the driving reasons for its creation.

The Vow attempts to understand the breadth of Raniere's influence by examining his personal relationships both with past romantic partners and senior members of NXIVM, which together demonstrate a long pattern of manipulation (and which include a disturbing amount of overlap). Though the show does dispute a number of Raniere's claims about his accolades and brilliance, its narrators maintain a seeming reverence for, if not Raniere himself, his purported goal to "better the world." By the end of the first season, it's still not entirely clear how so many people were drawn in by the charms of a man who appears at best aggressively ordinary and at worst obviously predatory. Ultimately, The Vow's implication that there's anything special about Raniere worth analyzing feeds into the mythos surrounding him rather than dismantling it.

Seduced does the opposite. The cult specialists featured in the series quickly rip Raniere's larger-than-life image to shreds by disproving countless false claims he made about his intelligence and accomplishments. Though Raniere claimed to have one of the highest IQ scores in the world, in reality he graduated college with a 2.26 GPA. And contrary to his claims of business success, he previously ran a failed company called Consumers' Buyline that was forced to shut down after investigations by 23 states and two federal agencies alleged it was a pyramid scheme. Instead of trying to understand Raniere's appeal, Seduced works to dismiss the idea that he's even worthy of any fanfare, focusing on the tangible methods of coercion and indoctrination he used to maintain control over his followers.

Which Show is Better?

Both docuseries have their merits, but Seduced presents a much more holistic picture of NXIVM and Raniere. Though The Vow's personal narratives are compelling, it's limited by the perspectives of its narrators, most of whom were senior members of NXIVM and therefore have an active interest in justifying their actions and those of the group at large. It's also disconcertingly light on facts. Not only does the series almost entirely lack the perspective of experts on cults and psychological deprogramming, it doesn't spend much time questioning the purported goals and motives of its members. And it often avoids grappling with the complicity of its primary narrators in both recruiting people into NXIVM and perpetuating the smaller abuses that made coercion possible within the group.

Seduced, meanwhile, unfolds from India Oxenberg's vantage point as a much younger, less powerful member of NXIVM and is supplemented with a much wider range of perspectives — including, critically, outside experts. Instead of treating NXIVM like it was special, Seduced exposes the group for what it was: a cult that used many familiar tactics to prey upon its members psychologically, emotionally, and financially in order to pave the way for the creation of DOS. By centering NXIVM's victims, Seduced tells a story in just four episodes that is not only much more informative, but also more emotionally resonant than the entire first season of The Vow.

The consensus? Skip The Vow — Seduced is the only NXIVM docuseries worth your time.

More like this
Here's What Jeffrey Dahmer's Dad Has Said About His Other Son, David
By Grace Wehniainen
Where Is Lionel Dahmer Today? Jeffrey Dahmer’s Father Reflected On The Serial Killer’s Death In 2020
By Brad Witter
Alleged Cult Leader Larry Ray Is Awaiting Sentencing Following His Conviction
By Brad Witter
Where Is The Bling Ring’s Rachel Lee Now?
By Arya Roshanian
Get Even More From Bustle — Sign Up For The Newsletter