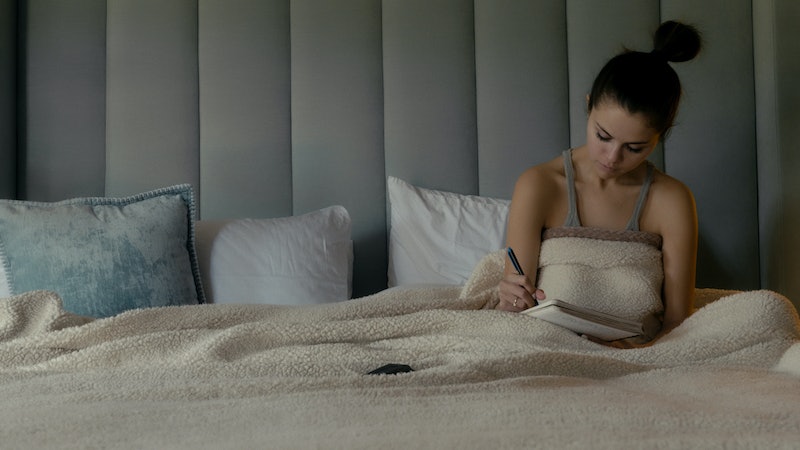 Selena Gomez wants you to look at her now. In an exclusive video provided to Bustle for the Nov. 4 premiere of Selena Gomez: My Mind & Me on Apple TV+, the 30-year-old entertainer candidly explains why creating this project ended up being so important to her and why you should watch it. “I didn’t really expect I would do a documentary,” Gomez admits. “But for some reason, my life became so overwhelming. It stopped becoming about me — it became about the world.”

The reason the Rare Beauty founder made Selena Gomez: My Mind & Me goes beyond just giving fans a closer look at her life with behind-the-scenes footage and childhood home videos. “I grew up not understanding myself, and I had to figure out what kind of woman I wanted to become,” she says. “When I started to realize all this stuff was going on that I couldn’t control sometimes even, it was terrifying. But I know who I am, and I know who I want to be, and nothing or anyone will ever take that away from me. If I can make someone else feel that way, then I’ve won.”

READ NEXT: Selena Gomez On Trust & Why TikTok Always Wins

Gomez grew up in front of our eyes, making her TV debut on Barney & Friends in 2002 when she was 10 years old and rising to stardom playing Alex on Disney Channel’s Wizards of Waverly Place from 2007 to 2012 as a teenager. She parlayed that fame into a global music career, and most recently, a starring role on Only Murders in the Building. Throughout the years, Gomez has been open about her mental health, becoming a high-profile advocate for destigmatizing the topic among her fanbase and general public. In 2022, Gomez even launched the mental health platform Wondermind, two years after launching the Rare Impact Fund to raise $100 million within 10 years to help reduce stigma and expand access to mental health services.

Now, Selena Gomez: My Mind & Me will specifically explore her “six-year journey into a new light” after she was diagnosed with lupus, anxiety, bipolar disorder, and depression. “I am grateful to be alive,” Gomez says in a voiceover in the documentary’s two-minute trailer. “Like my whole life since I was a kid I’ve been working, and I don’t wanna be, like, super famous. But I do know that if I’m here I have to use that for good.”

Gomez notably released the Selena Gomez: My Mind & Me trailer on World Mental Health Day on Oct. 10. The trailer includes a brief snippet of her new song “My Mind & Me,” which came out in full on Nov. 3. The documentary, which comes from the producers of the Emmy-nominated doc Billie Eilish: The World’s a Little Blurry, was produced by Lighthouse Management + Media and Interscope Films for Apple TV+.

More like this
Selena Gomez & Blackpink's Post-Show Meetup Left Fans Thirsty For More
By Stephanie Topacio Long
Kim K Is Putting Kanye’s Memorabilia — Like Grammys & Clothes — In A Vault
By Jake Viswanath
The 'Love, Lizzo' Harry Styles Scene Is Just 1 Moment That Made Fans Feel Seen
By Brad Witter
Watch The Gripping First Trailer For The 'Harry & Meghan' Netflix Doc
By Jake Viswanath
Get Even More From Bustle — Sign Up For The Newsletter