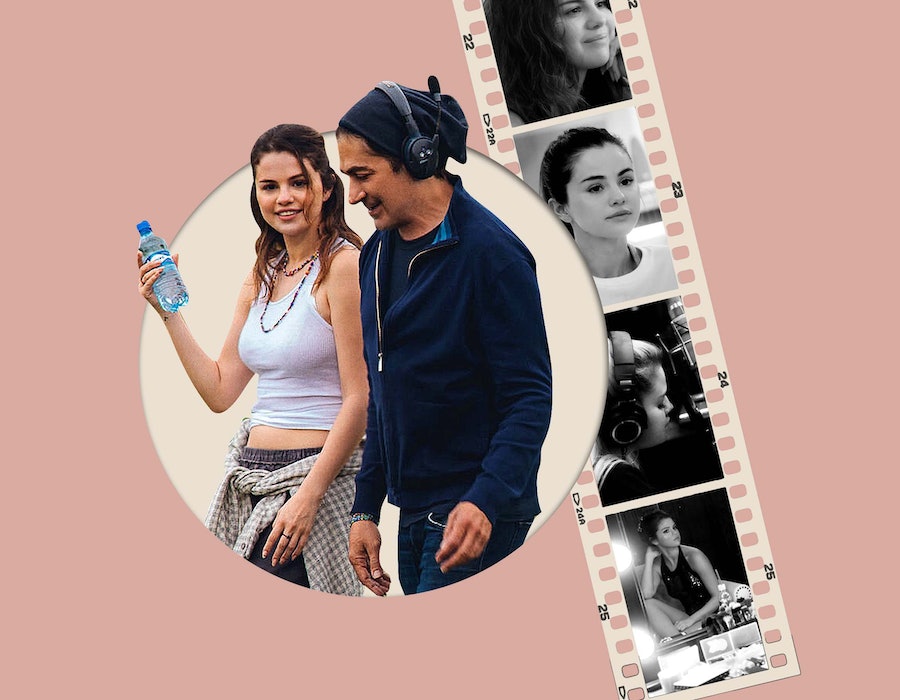 On Friday, Selena Gomez will release Selena Gomez: My Mind and Me, the Alek Keshishian-directed story, six years in the making, of some of her darkest, most vulnerable moments. Who is the 30-year-old singer most excited to share the Apple TV documentary with? “My mom hasn’t seen it yet, and I’m actually really excited,” she says slowly. “She wanted to wait to watch it with me. She’s been really supportive, and we’re in a really good place about it, so I’m happy.”

Keshishian, who is most famous for his genre-shifting 1991 documentary, Madonna: Truth or Dare, first began filming Gomez in 2016. She was beginning a world tour for her 2015 album, Revival, but after 55 dates and three continents, the tour was shelved. At the time, Gomez disclosed that she was experiencing anxiety and depression following a 2014 diagnosis of lupus. Keshishian ceased filming while she underwent treatment, though the subsequent years offered little reprieve; Gomez had a kidney transplant in 2017, and later revealed she received a diagnosis of bipolar disorder. She bore these health challenges through an unrelenting celebrity spotlight, which is still on full display as the pair begin filming again in 2019. Some of the footage from those days is almost discomfitingly intimate, but a vulnerable and open Gomez still prevails, and by the closing scenes you have the sense of a woman who has wrestled a relentless and unforgiving public existence into something quiet and manageable.

Last week, Gomez and Keshishian joined me from separate locations on Zoom to discuss the challenges of building intimacy and why social media can never replicate the honesty of an outsider’s lens.

CO: As much as this documentary is about mental health, it also felt to me like a love letter to friendship, especially the relationship between you and Raquelle. Selena, you’ve spent your entire adult life being famous. Is it hard to make female friends as an adult?

SG: I mean, it’s so hard. It’s so hard to find genuine people. I’ve known Raquelle for 10 years, and we put in the work. We’ve had the fights and gone through it all. And I think what really made me love Raquelle and continue to love her deeply is that she’s the kind of person that will keep me grounded. It’s nice to have someone who can be completely honest with you, but at the same time really gentle. I feel safe around her, and to me, it was just my friend and me on the screen. But it is hard. I don’t know how to make new friends now. It’s just… it’s hard to trust people.

CO: Alek, I wonder how friendship factors into your role when you’re filming. Do you become like a friend, or is it more about blending into the background and keeping some distance?

AK: No, I would say I absolutely become a friend. I become more than a friend; I’m almost like a brother. I feel a great deal of protectiveness towards my subjects and a great deal of empathy. So much of a documentary film, the kinds that I do at least, are about falling in love with the subject you’re filming. And in Selena’s case, I fell in love with her on some level in 2015 when I met her. She was just so vulnerable and authentic and didn’t have any artifice to her. But I earned her trust over time. Sometimes, I’d be the only one filming because I knew that no one else she would be comfortable with.

CO: Selena, I was very impressed that you were letting people come into your bedroom when you’re still in bed. I’d be very much hiding under covers at that point.

AK: She would literally at points like, look at me and be like, “What am I doing?” And I’d always go, “It’s for a bigger purpose.” We would say that sometimes to each other. I mean, it was hard on both of us, but I think that was the glue that kept us motivated.

CO: Selena, when you walked into your old middle school, I was struck by that scene when you open the door and instead of being greeted by these faces, you’re greeted by loads of people with their phones out. And by contrast, I was struck by how little I saw you on your phone in the documentary. What kind of relationship do you have with your phone and technology now?

SG: You know, just cause you said it, I want to know my screen time, for the past day… [Pulls out phone]. Yep. Today’s just two hours.

CO: That’s not bad! I think that’s quite good.

SG: Yeah. I’m very horrible at texting and everything, but luckily, I’ve built enough trust with my friends that they know it’s not personal. I just really like to separate myself from my phone, and I find that I only want to use my phone when I need it, like making a phone call because I miss a friend or my sister. I spend like 30 minutes, if that, on TikTok. It's definitely not daily, and I think that is a healthy thing for me. I know it’s hard for a lot of people to do, but luckily it’s worked out for me, and I am glad. [Otherwise] it stresses me out.

CO: It’s interesting because you have such an enormous following on Instagram, but I see you more on TikTok now. Do you prefer TikTok?

SG: You know, I do. I have… I have my reasons for [preferring] it. I have had moments where I’ve been triggered by something [on TikTok], but they’re so few. I find my algorithm is funny sounds and people being creative and recipes, and I bookmark so many recipes. If something [unpleasant] pops up, I just say “not interested” and they do a really good job, at least for me, [of removing it], so I don’t get any sort of noise. And I don’t look at comments, or at least I try not to. I just find it to feel a bit safer.

CO: People with big audiences like Selena can share so much of their life on social media now. Alek, what do you think the appeal is of the documentary format versus say, live streaming?

AK: In documentary — if you’re really willing to do this, and I don’t know that everyone is — you allow someone else to interact with you and to see you from their lens. The danger of self-revealing in a documentary is very hard, but you have the opportunity to work in collaboration and maybe see things about yourself that you may have been blind to. They say in a documentary, ideally both the subject and the filmmaker change from the experience.

CO: Interesting. How have you changed?

AK: I have changed a lot in terms of what's important in my life. I've been inspired by Selena to really try to make more of an impact in the world and to try to bring more light to the world. I think I’ve become a softer, kinder human being.

CO: That’s a very wonderful legacy from a project. Selena, at one point you said that you “started to feel vain and lonely in L.A.” One of the most debilitating symptoms of depression I’ve found is being paralyzed by anxiety about how other people see you but also not feeling worthy of taking care of yourself. I wonder how you feel about that, as I noticed you were often most confessional and open when you were sitting in hair and makeup.

SG: Oh gosh. Just by learning from everything I’ve walked through, I’m proud to say that now I can look at myself in the mirror and be OK. It’s not like I wake up and I’m like, “Oh, my God, I’m amazing and I feel beautiful,” but taking care of my skin makes me feel good, makes me feel pretty, and taking care of my mind is the same. Once you start having a great relationship with yourself, it really helps put perspective into my work. So the vanity part has faded a bit because everything I do now has some sort of giving back, and I have my Rare Impact Fund that I am so, so passionate about. But you’re definitely right on the whole vanity thing of music in L.A. It’s hard.

CO: What counts as a good day for you now?

SG: Oh, um, not having intrusive thoughts. [But] I love my imagination. I love daydreaming. I think that’s a part of creating, and it’s a part of my job. And I enjoy that.

AK: It wasn’t difficult to film because by that point we were just so comfortable in each other’s presence. I think she almost appreciated there was a witness to the chaos of that time. Someone to be like, “It’s not my imagination, right?” I also really wanted London and Paris to show from her point of view what [being famous] is like. Because I think that most people think “Oh, fame and celebrities, it’s all just wonderful” or that it’s this panacea that cures everything. But actually there’s some difficulties that come with it. So that wasn’t difficult to film, but there were days that were difficult logistically. I had to constantly adjust which cameras I was using depending on her mood, because I was very aware that some days she probably couldn’t tolerate the bigger cameras [Laughs].

CO: Selena, has it felt validating to see it all? The journey and the progress laid out?

SG: It’s not validating… I feel like I’m releasing, like I’m exhaling. Like I was holding all of this stuff in, and it is super vulnerable, and I was just willing to just let it be. I don’t know why. It was kind of just a happy accident where I realized this was going to be much bigger than myself.

CO: In the documentary, you said that doing promo is your “least favorite thing to do in the world,” and we see you taking a mix of either really invasive or completely inane questions. How do you feel about doing promo this time around?

SG: You know, it’s been great. Maybe I should clarify this, so I will with you: I love talking about things I’m really passionate about. I think I get more anxious when people ask me unnecessary, mundane things. And then I get pissed [laughs]. If I’m promoting a film, I would love to tell you about the process of a character and the relationship I have with my co-star and the hard moments on set. I could talk about that forever. Or if I’m promoting music, [I’ll talk about] the messages and be as vague or as honest and open as I want to be. It’s just more about those unnecessary interviews, and I know there’s people out there that know what I'm talking about. [Laughs] It’s a love-hate relationship.

Selena Gomez: My Mind & Me is available on Apple TV on November 4

More like this
Michelle Williams Laughs Often About Motherhood Thanks To 'The Fabelmans'
By Marina Watts
Ashley Benson Revealed The Whole-Body Effects Of Her Anxiety On TikTok
By Stephanie Topacio Long
Robert Downey Jr.’s New Film Is A Tender Story of Fatherhood & Forgiveness
By El Hunt
Lindsay Lohan Just Recalled A Hilarious 'Parent Trap' Story
By Sam Ramsden
Get Even More From Bustle — Sign Up For The Newsletter