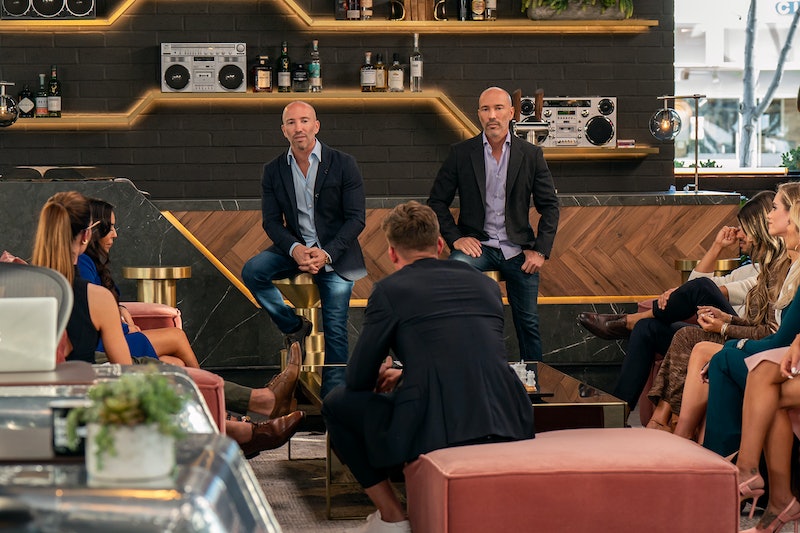 In the Selling Sunset Season 4 finale, Jason and Brett Oppenheim announced that they were opening an office in Corona del Mar, an exclusive area of Newport Beach, Orange County, just south of their Sunset Strip headquarters. Given that the brothers threw a huge party on the show to celebrate the opening of the new agency with both the Sunset agents and the new OC ones taking on the listings down south, the possibilities for a proper crossover are endless. But viewers might have to wait to see any Selling Sunset cast members appear on the spinoff, Selling The OC.

Netflix announced Selling The OC in November 2021, per Variety. Unlike Selling Sunset, the new series features both male and female agents, including Alex Hall, Alexandra Jarvis, Alexandra Rose, Austin Victoria, Brandi Marshall, Gio Helou, Kayla Cardona, Lauren Brito, Polly Brindle, Sean Palmieri, and Tyler Stanaland. Many of them were present at the Selling Sunset Season 4 finale party celebrating the new office, but also for that mega showdown between Christine Quinn and the rest of the Selling Sunset cast. Creator Adam DiVello told Netflix that most of the Selling The OC cast left the party wondering if that sort of drama was in their future. Luckily for viewers, it most definitely is, and they don’t need any of the Selling Sunset cast members to help facilitate it.

Throughout the eight-episode first season of Selling The OC, only the Oppenheim brothers, Jason and Brett, appear on the show. While Brett appears here and there throughout the episodes, it’s mostly Jason in the Newport Beach office (at least while cameras are rolling). He helms the team meetings, which are way more contentious than any of the office gatherings at the Selling Sunset office. He also shows up to some listings with newer agents and can be heard on the phone (likely from Los Angeles), guiding the cast as they make some tough decisions about how to deal with fickle sellers and wary buyers.

Fans might have expected Selling Sunset’s Heather Rae El Moussa to make an appearance since she calls Orange County home. But she doesn’t make a cameo in Season 1, although that could change in the future.

The reason the Selling Sunset agents aren’t in the spinoff series is likely because the shows are based in two very different locations. When you’re wrangling double-digit million dollar deals, who has time to take road trips down the Pacific Coast Highway? Also, it’s worth noting that DiVello told Netflix in the same interview about how the Oppenheim brothers had plans to open a Newport Beach office long before they decided to make a series out of it. That means the casting for the show happened in conjunction with Jason also hiring a team of ambitious young agents who would help his agency stake out a presence in Orange County.

There hasn’t been any mention of a Selling The OC Season 2 just yet, but if Netflix greenlights another handful of episodes, there are still chances that some of the Selling Sunset agents make an appearance, especially if it means making a good deal — or stirring up some extra drama.

More like this
'The Crown' Season 6 Has Suspended Filming "Out Of Respect" For The Queen's Death
By Bustle Staff
Andy Cohen Apologized To Larsa Pippen After A 'RHOM' Season 5 Reunion Dust-Up
By Brad Witter
Ozzie’s Coming Out Scene With Kitty On 'That ’90s Show' Has Twitter Sobbing
By Brad Witter
The Mysterious Gunther Corporation From 'Gunther’s Millions' Has Dissolved
By Brad Witter
Get Even More From Bustle — Sign Up For The Newsletter
From hair trends to relationship advice, our daily newsletter has everything you need to sound like a person who’s on TikTok, even if you aren’t.