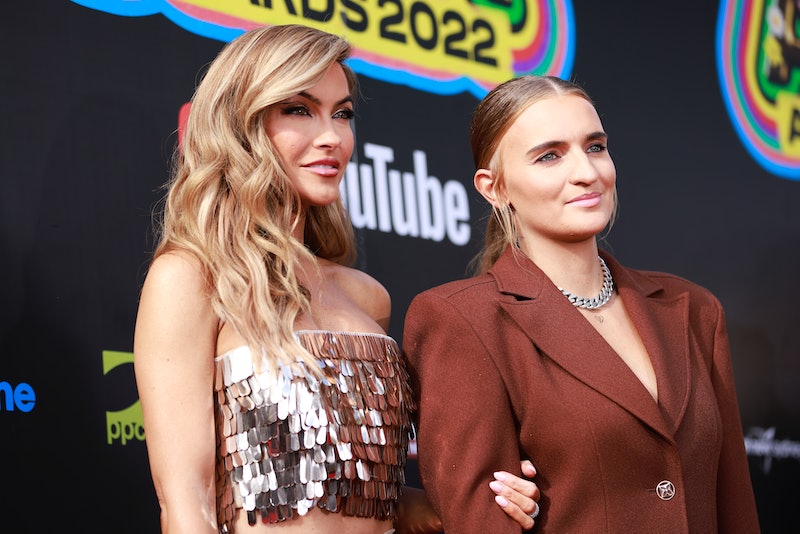 Chrishell Stause has questions, and now, all of her fans want answers. On Dec. 6, the Selling Sunset star revealed on Twitter that the 2022 People’s Choice Awards wouldn’t allow her to bring her partner G Flip, who she’s been dating for nearly a year, to the ceremony. “I am on the sauce a bit so I will prob regret this later. BUT people’s choice didn’t allow me to bring my partner to the awards,” she wrote. “I could ONLY bring a plus 1 if it was a cast member. Wtf Sure this means I will never be nominated again but honestly fu.”

However, Stause said she wasn’t aware that her Selling Sunset co-stars received their own invitations to the ceremony until she showed up on the red carpet, and claimed that some of them brought dates that weren’t on the show. The snub hurt even worse because she was the only cast member that was nominated individually for Best Reality Star, outside of the series’ nomination for Best Reality Show.

“Up until a few days ago I was fighting to get them in and only to see everyone invited. Gtfoh,” she continued in follow-up tweets. “If you are going to invite the whole cast of #sellingsunset @peopleschoice awards then why did my plus one HAVE to be a cast member or otherwise told I do not get a plus one..?? If no other cast invited then that would make sense but…” Bustle has reached out to representatives for the PCAs for comment but did not receive an immediate response.

Stause clarified that G Flip wouldn’t have been able to attend anyway after they realized a few days prior to the awards show that the Australian singer would be out of the country, but for her, it was a matter of principle. “Multiple cast members brought their sig others/non cast members,” she replied to a fan who accused her of attention-seeking. “Only mine was not allowed. Also the only one with an individual nomination. Would love to know the reason.” Stause wrote that several hours after her initial tweets, indicating that she actually doesn’t regret speaking her mind.

The reality star revealed that she was dating G Flip, who identifies as non-binary and uses they/them pronouns, on the Selling Sunset Season 5 reunion in April. “I was probably as surprised as anyone,” she said. “I hear people talk about these things and they’re like, ‘I knew from a young age.’ That’s not me. I’m just, I’m very open to good energy.”

While Stause was nominated on her own for the first time at the 2022 PCAs, she lost Best Reality Star to Khloé Kardashian, who also took home the award last year. Similarly, Selling Sunset lost the Reality Show award to The Kardashians. The Netflix series fared better at the MTV Movie & TV Awards: Unscripted in April, where it won Best Reality Docuseries and Stause took home Best Reality Star.

More like this
RHOP’s Robyn Dixon Explained Why Juan Paid For Another Woman's Hotel Room
By Brad Witter
Love Is Blind’s Natalie Claims Shayne Signed Up For 'Perfect Match' While They Were “Still Together”
By Brad Witter
Everything To Know About 'The Real Housewives Ultimate Girls Trip' Season 4
By Jake Viswanath
Andy Cohen Apologized To Larsa Pippen After A 'RHOM' Season 5 Reunion Dust-Up
By Brad Witter
Get Even More From Bustle — Sign Up For The Newsletter
From hair trends to relationship advice, our daily newsletter has everything you need to sound like a person who’s on TikTok, even if you aren’t.