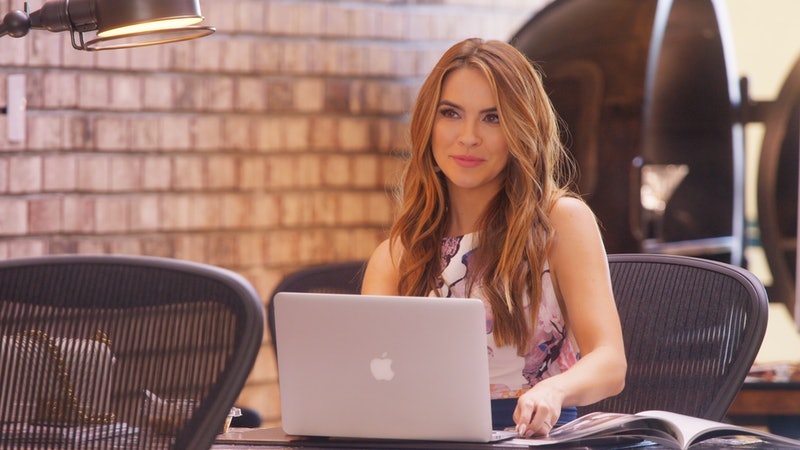 Selling Sunset has been confirmed for a fourth and fifth season on Netflix, and it already seems the Los Angeles-based reality show will be chock full of drama when it returns. Christine Quinn, undoubtedly the show’s most controversial cast member, recently revealed that she is pregnant with her first child, however, hadn’t received much support from her castmates. As the stars continue to feud, Selling Sunset’s Chrishell Stause clapped back at Christine Quinn after she called her out on social media.

So how did it all kick-off?

Earlier this month (March 6), Christine made a TikTok accusing her co-stars of not congratulating her on her baby news, to the tune of Chris Brown’s Loyal (if you know, you know). In the post, Quinn revealed Selling Sunset’s Mary Fitzgerald, Heather Rae Young and Chrishell Stause had not liked her pregnancy announcement on Instagram.

However, Chrishell Stause who has had a difficult relationship with Christine in previous seasons, says she “truly wants the best” for the fellow estate agent. However, she’s not going to unblock Christine on her social media accounts to send her well wishes.

"Listen, I wish her well. It came up on my feed [on a news outlet's account], I liked it. I'm happy for her. I truly want the best for her, but I'm not going to do this performative act to unblock someone and then like a post," Chrishell Stause told People.

"We had things that happened behind the scenes that were worse than what happened on camera, so it's just better for everybody. Let's keep it professional," she added.

"It is what it is; I'm not going to do a fake performative thing and make a show of something. But like I said, no ill will — I truly am happy for her, and I wish her nothing but the best."

Chrishell isn’t the only Selling Sunset star who has responded, via video chat, Mary Fitzgerald recently told Heatworld (March 13) that she and Christine are “OK”. "I did reach out to her. I sent her a voice memo, like a voice text, saying how happy I am for her pregnancy. I saw it through the media,” she said.

Despite the drama, Christine had confirmed to US People that Amanza Smith and Maya Vander have been supportive throughout her pregnancy, and she hadn't ruled out giving birth on the reality show.

Whatever happens, I’ll certainly be watching.

More like this
10 Photos Of William, Harry, & Their Cousins Honoring The Queen Together
By Stephanie Topacio Long
William & Kate Shared How Their Kids Are Doing As They Mourn The Queen
By Stephanie Topacio Long
Here’s Everything You Need To Know About Operation London Bridge
By Bustle UK
Why Princess Anne Will Remain Princess Royal For Years To Come
By Sophie McEvoy
Get The Very Best Of Bustle/UK