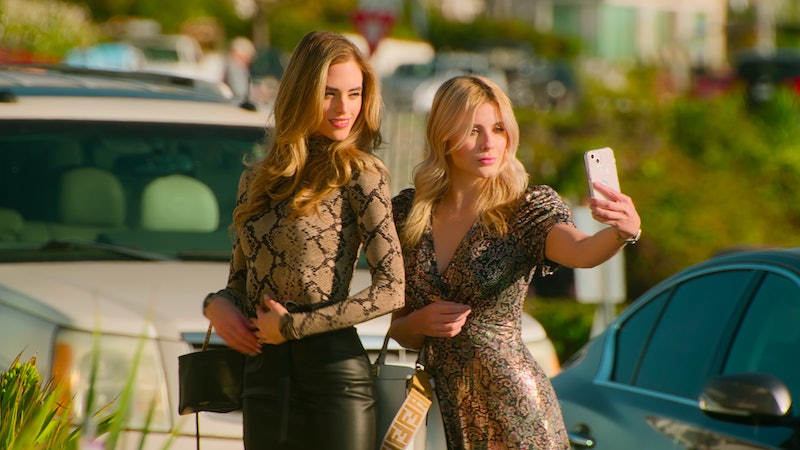 As soon as Netflix’s Selling The OC introduces Alexandra Jarvis and Alexandra Rose, showrunner Adam DiVello and his team of editors want us to know that they are the baddest real estate agents at The Oppenheim Group, if not in all of Newport Beach. The two blondes tower over their clients and colleagues in designer heels and Barbie-pink suits while an ominous pop song about standing alone and ignoring your haters plays in the background. We get it, Selling The OC production team: Everyone either already hates Jarvis and Rose in real life or will be forced to pick sides — viewers included. But why does everyone hate the Alexandras in Selling The OC in the first place? Can they really be as evil as everyone thinks they are?

Rose was one of the first agents hired at the new office after meeting Jason Oppenheim at a New Year’s party in Miami in 2020. “Mary [Fitzgerald] was there. She was super sweet, and she went ahead and told me to email him,” Rose tells Bustle. So she got in touch and was eventually hired at the O Group and joined the cast on Selling The OC. Jarvis wasn’t far behind her, having left her career in law years prior and getting into the real estate game in the OC. Once at the new office, Jarvis and Rose began working as a team. “Rose and I have a really good working relationship,” Jarvis tells Bustle. “We’re both very strong women. We have very different personalities, but we play to our strengths together.” That’s a good thing because the rest of the cast often doesn’t welcome them to the party.

Why Jarvis & Rose Say Everyone Hates Them On Selling The OC

Jarvis and Rose tell Bustle that they are simply misunderstood. Rose says that none of the women seemed to like Jarvis from the get-go. Selling The OC even briefly mentions a rumor among the cast that the two agents were sleeping with developers in Orange County to get clients — something they vehemently deny. Despite their success, Rose and Jarvis feel like their reputations have been tarnished. Rose says, “Kayla told me the other day that the rumors are still going around. It’s just so stupid,” Rose says. “If it were that easy, everybody would do it.”

While Jarvis and Rose are reportedly some of the agency’s top producers, Jarvis says the other women don’t congratulate them on their sales like they do with the other agents. When Jarvis and Rose attend events or stand up for themselves, they say they already feel like the odd women out, though other cast members like Polly Brindle say the Alexandras are the ones stirring the pot and being bullies.

Polly tells Bustle that she was one of the first agents at the Newport Beach office, along with Rose and Justin Itzen (who wasn’t cast on the show). They worked together for months, even going out to dinners together. Still, Polly says she “never felt a connection” with Rose, despite her attempts at befriending her. Then, Jarvis joined, and the whole dynamic shifted. Polly explains that Jarvis wouldn’t even look her way for six months before they started filming. “She made it very apparent that she didn't want anything to do with me,” Polly says. So the words they exchanged at Gio Helou’s casino night in Selling The OC Season 1 were a long time coming.

For her part, Jarvis maintains that calling Polly “honey” or “dear” was just a symptom of her Alabama upbringing, and she was trying to “de-escalate” the situation with kindness because she thinks Polly can be so “aggressive.” That said, she admits she now knows that using the words pushes Polly’s buttons. “Now [calling her dear or honey] is just funny to me.”

Although Jarvis and Rose fight with Alex Hall, Polly, and the other agents throughout the season, things take a turn after the “almost kiss” between Kayla Cardona and Tyler Stanaland at an after-party event. Kayla apologizes on the show, and she and Tyler and Kayla say they are still friends. But Hall, Polly, Brandi Marshall, and others have stayed angry at Kayla for making their married friend uncomfortable. As Kayla was pushed out of the group, Jarvis and Rose swept in, seemingly with good intentions. Jarvis and Rose agree that what Kayla did was wrong but point out that Hall and the others also flirt with Tyler, with Hall going as far as to give him a “nosey” and Polly skinny-dipping in front of him at the beach. “I just think it’s hypocritical. I don't care if you have a good relationship with him; he’s still married,” Jarvis says. “That's not the kind of place I want to work at.”

Where Do Jarvis & Rose Stand After Selling The OC?

Now that Season 1 has wrapped, many of the relationships on the show have shifted. Hall, Polly, and the others say that they are no longer personally close to Kayla, but Jarvis and Rose have stayed in touch with her since seeing the episodes. Kayla tells Bustle that she was crying in the finale when Jarvis and Rose brought up the Tyler situation because she thought they were bringing it up to make her look bad. “I immediately called Jarvis and Rose, and I apologized because that's what they deserved,” Kayla says. “They were having my back the entire time, even during scenes that I wasn't in.” Kayla explains that she now realizes it was Hall and the others bullying her behind her back.

With all of this back and forth, it’s hard to figure out who the real villains are, even if the editors are trying to send viewers a message. One thing is for sure: They found some Christine Quinn-level star power in both Jarvis and Rose, who laugh at the comparison. Both agents note that they’re very different from Quinn, who seemed to enjoy stirring the pot on Selling Sunset. As Jarvis explains, “I'm a no-nonsense person. I want to sell real estate. I want to do really well. And you know, if other people try to get in my way, I'm not going to let 'em.”

More like this
'Bling Empire: New York’ Star Tina Leung Has A Superhero Alter-Ego
By Alyssa Lapid
'That '90s Show' Star Callie Haverda Got Advice From Mila Kunis & Ashton Kutcher
By Brad Witter
'Bling Empire: New York’ Star Dorothy Wang Wants To Try 'The Simple Life'
By Alyssa Lapid
Everything To Know About 'Selling The OC' Season 2
By Brad Witter
Get Even More From Bustle — Sign Up For The Newsletter
From hair trends to relationship advice, our daily newsletter has everything you need to sound like a person who’s on TikTok, even if you aren’t.