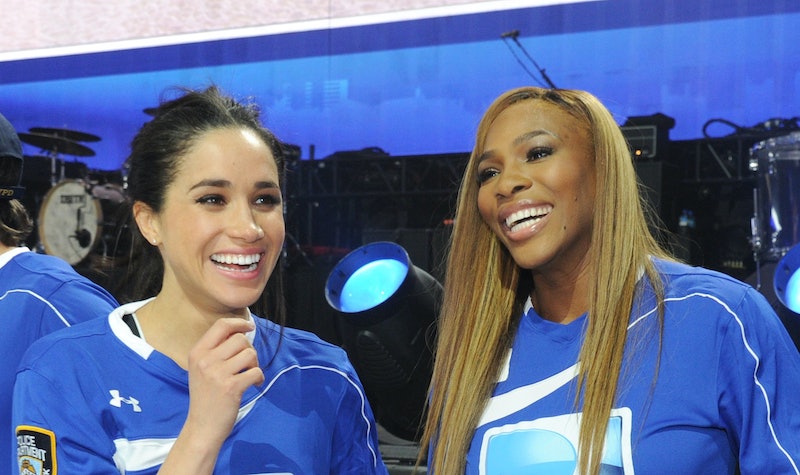 In the hours before and after Meghan Markle and Prince Harry's interview with Oprah Winfrey, many close friends of the couple spoke out in solidarity. One such friend is Serena Williams, who shared her support for the couple in a statement on social media where she described Meghan as a "selfless friend" who teachers her "every day what it truly means to be noble."

Williams, who met Meghan at the 2010 Super Bowl according to People, then responded to the issues raised by Meghan and Harry in the Oprah interview, including the alleged racism and lack of support within the royal family, by drawing on her own experiences. "I know first hand the sexism and racism institutions and the media use to vilify women and people of colour to minimise us, to break us down and demonise us," Williams wrote on Twitter. "We must recognise our obligation to decry malicious, unfounded gossip and tabloid journalism."

Gossip was a contributing factor in bringing Meghan to breaking point, leading her to feel like she "just didn't want to be alive anymore," as she told Winfrey in the interview. "The mental health consequences of systemic oppression and victimisation are devastating, isolating, and all too often lethal," Williams highlighted in response.

During the interview, Meghan and Harry revealed that they're expecting a baby girl this summer. "I want Meghan's daughter, my daughter and your daughter to live in a society that is driven by respect," the sports star said. Williams has been an ardent supporter of Meghan as a mother, saying in a 2017 interview with Vogue that Meghan "will be an amazing mom" as "she is so attuned to balancing strength and sensitivity."

In the same year, Williams also shared advice she'd given to Meghan during an interview with Vanity Fair. "Her personality just shines. I told her, 'You've just got to be who you are, Meghan. You can't hide'."