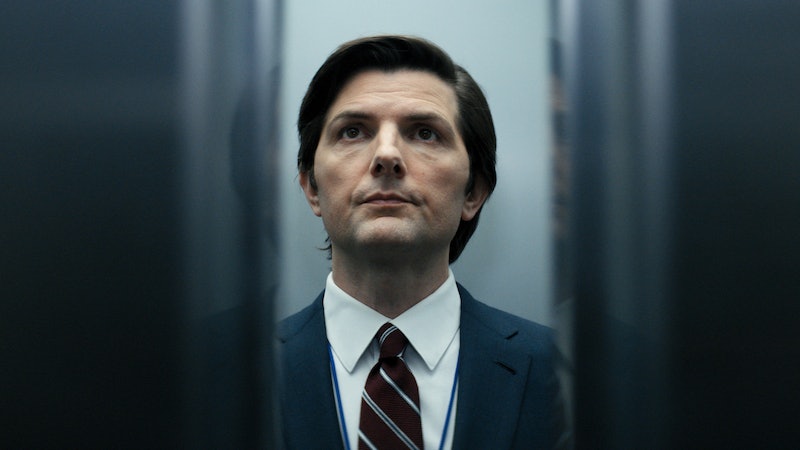 Spoilers ahead for Severance Season 1. Severance Season 1 leaves the fates of everyone’s favorite data refiners hanging in the balance. After Dylan (Zach Cherry) volunteers to enact the Overtime Contingency — a Lumon protocol used to revert outies into innies outside of work — Helly (Britt Lower), Mark (Adam Scott) and Irv (John Turturro) find themselves thrust into lives they know absolutely nothing about. Helly learns that she’s actually Helena Eagan, one of the heirs to Lumon Industries; Irv discovers his love interest Burt (Christopher Walken) is already married; and Mark finds out that not only is his supposedly dead wife seemingly still alive, she’s Lumon’s wellness director Ms. Casey (Dichen Lachman).

But just as the characters are coming to these realizations — and Helly is in the midst of a speech warning investors of how awful severance is — Mr. Milchick (Tramell Tillman) accosts Dylan in the security room and seemingly ends the Overtime Contingency, reverting the outie versions of Mark, Helly, and Irv back to their usual selves. Ending on such a massive cliffhanger obviously sets up a second season, and AppleTV+ confirmed days ahead of the finale that the show will return.

“Thanks to creator Dan Erickson, the brilliant Ben Stiller [who serves as director], and an incomparable cast and crew, Severance has imagined an existence that’s equal parts riveting and enthralling as viewers around the globe can’t get enough of these rich characters,” Matt Cherniss, head of programming for Apple TV+, said in a press release. “We’re excited to go deeper into this wholly unique world and unpack more layers of Lumon in Season 2.”

A small teaser for the upcoming season was also released in the form of a Lumon-style broadcast, with the caption “You’ll feel like you never left.” Here’s what else we know about Season 2 so far.

A premiere date has not yet been announced, and it’s difficult to predict when the show might return. Not only is the cast comprised of several in-demand actors, the first season took quite some time to make it to screen. “It has been a long road bringing Severance to television. I first read Dan’s pilot over five years ago,” Stiller said in a release.

Filming for the series was set to start in March 2020 but was obviously delayed due to the pandemic. They resumed shooting in November 2020 but had to shut down several times to adhere to health protocols. They were scheduled to finish filming in mid-2021, and the series premiered in February 2022. Though Apple TV+ has yet to confirm a Season 2 start date, Production Weekly reported on July 13 that filming is slated to begin in October 2022.

Meanwhile, Erickson already told Variety that Season 2 will consist of 10 episodes, compared to Season 1’s nine. Given that timeline, it’s reasonable to think Severance could return in mid to late 2023.

It’s a safe bet that the main cast will reprise their roles in Season 2. The only character whose fate is uncertain is Lackman’s Ms. Casey, who was sent down to the “testing floor” in Episode 8. However, given Mark’s revelation about her, she’ll presumably be involved in Season 2 in some capacity. Yul Vazquez, whose character Pete — an ex-Lumon employee — died in Season 1, is unlikely to return. It’s unclear if his daughter June (Cassidy Layton) will continue to be a part of the story.

On Oct. 31, Apple announced that eight new actors will be joining the Severance cast in Season 2. While the streamer didn’t reveal who these new cast members will be playing, it includes some notable names, like Gwendoline Christie, Alia Shawkat, Bob Balaban, and Merrit Wever. Robby Benson (Beauty and The Beast), John Noble (Fringe), Stefano Carannante (Mirabilia), and Ólafur Darri Ólafsson (The Missing) will also be appearing in Season 2.

There are many unanswered questions at the end of Severance Season 1 — including what exactly it is that Lumon does. Fans have postulated that working at Lumon is actually some sort of prison sentence, that Mark and his team are writing the code and preparing for severance operations, and that Lumon is a straight-up cult they’re carrying out bidding for, but one Redditor suggests the work they’re doing isn’t even real. Instead, the user says, the chips in the brains are AI, and the Lumon employees’ bodies are simply being used for that AI to learn human emotion and fear. Once they’ve accomplished this, they become permanent innies like Ms. Casey and are assigned to an actual job that Lumon needs.

The end of the season also opened up another theory about the severance process in general. As pointed out by Screen Rant, during Dylan’s time in the security room there was a brief image shown on the control screen of other protocols beyond the Overtime Contingency: Beehive, Branch Transfer, Clean Slate, Elephant, Freeze Frame, Glasgow, Goldfish, Lullaby, and Open House. It’s unclear what any of these processes do, but it seems to confirm that Lumon is capable of doing a lot more than bifurcating the memories of their severed employees.

Beyond that, it’s not entirely clear where Harmony’s allegiances lie. She clearly doesn’t mind hiding things from corporate, but also doesn’t want Mark and co. to learn the truth about what’s going on. Plus, she has that weird Lumon shrine, where she was seen cradling a bracelet with the date 3/17/44 written on it. The name on the bracelet is Charlotte Cobel — theoretically Harmony’s mother — which led Pure Wow to theorize that her mom was in an accident and was then severed, much like Gemma before becoming Ms. Casey. It’s possible, then, that Harmony is using Gemma as a case study to see if severed innies can remember their outie lives, thereby allowing her to be reunited with her mother somehow. This would also explain Harmony’s adamant interest reintegration.

In April 2022, Erickson teased to Variety that the mystery of Mark and Gemma’s relationship will be explored in the future: “That’s the big question, what is special about Mark? And is it actually that there’s something special about him or is it more about Gemma, and he was sort of pulled in? Those are all left unanswered this season, but we will get into it.”

Meanwhile, Stiller elaborated that Mark’s budding romance with Helly will also play a part in telling that story. “To put him in this position where the Innie Mark, we’re starting to root for him and Helly, but now we also want to root for Outie Mark to find his wife,” he added. “That’s an interesting juxtaposition and conflict we’ll explore in the second season.”

Though more specifics are still being kept tightly under wraps, Stiller also dropped hints about Season 2’s tone in an August 2022 interview with Decider. When asked by the outlet if the series will head in more of an abstract “acid trippy” direction, he answered that “it’s going to be a balance.” As Stiller explained, “Part of the fun of the show is the stuff that you don’t quite understand, and you’re wondering what that is, what does that mean, and what the hell is that? And to me, that’s great to do, as long as the logic is behind it. Then [we] figure out a way to tell that to the audience in a way that’s not giving away too much too soon, and it’s satisfying. That’s the balancing act of it.”

He continued, “There are definitely some really fun, weird things in Season 2. But always, it’s through the lens of the basic story of these characters, these real people in this situation, because I do think that’s what people hold onto. ... This is a show about this work family, these characters, these people. So, no matter how weird the environment they’re in, you want to be able to relate to them as human beings. It’s hopefully a combination of that, but definitely some weird stuff.”

Hopefully, Season 2 will offer some more answers — namely about why there was a room full of goats.

An official trailer won’t be released until much closer to the premiere date, but the streamer might have dropped a subtle Season 2 teaser at a September 2022 Apple event. During an AirPods showcase video, a woman bearing a striking resemblance to Helly appears multiple times, both boarding a subway car and standing on a train platform. In the latter blink-and-you’ll-miss-it cameo, she appears to glitch out just before the brief clip ends.

This post will be updated as more Severance Season 2 details become available.