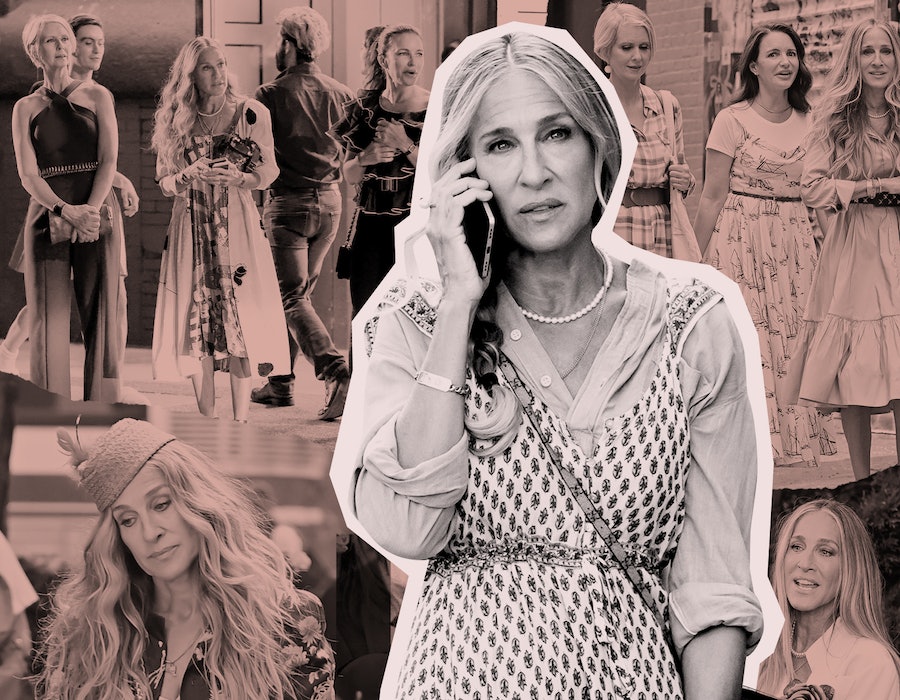 There were a lot of reasons to watch the original Sex and the City back in the day: the puns, the random actors who appeared in bit parts before they were famous (hey, look, Will Arnett!) and, of course, because it was always airing on E! in a continuous marathon when I came home from school.

But then, maybe most importantly, there was the fashion: the aspirational, borderline insane fashion choices that our four heroines wore as they strutted from early ‘00s Manhattan hotspots to the beds of men with single personality traits and back again. Miranda’s looks were all business-woman chic, a pre-Lean-In Lean In uniform of boxy suits in generally unflattering eggplant shades; Charlotte was Kate Spade by way of the Hamptons; Samantha’s outfits trended towards bare midriff handkerchief tops and low-necklines; and Carrie was the wildcard, prone to outlandish accessories (a belt over her bare midriff!), even before the movies, when the costumes of all of the women became so elaborately, self-consciously fashion-y as to become a parody of itself.

In case you’ve been living under a rock without cellular data, there is a new iteration of Sex and the City coming to HBO. And Just Like That... won’t feature Kim Cattrall’s Samantha (too busy scatting with her now ex-husband and his upright bass?) but, even more devastating, it’s also without the show’s longtime costume designer, Patricia Field, who has decided to continue to use her talents on the Emmy and Golden Globe-nominated series (sorry, just a little coughing fit over here) Emily in Paris.

Without Patricia Field, what will the clothing of the new SATC look like? Fortunately, we have a few paparazzi shots of filming in New York for a tantalizing peek. Before we dive in, don’t any of you dare to ask how a writer like Carrie Bradshaw can afford thousand-dollar designer clothes. It has been covered! (She splurged and went into debt! She bought Vogue instead of dinner! And then she was wildly overpaid for her column, had multiple best-selling books, and married a super-rich husband! There, done!)

First up... this, let’s call it an “ensemble.” It’s all just a little much for me: the button-down with the rolled-up sleeves, the peasant dress that isn’t from Forever 21 but could be, the printed bag, the pearls, and iridescent blue shoes. I know that Carrie’s vibe was always a little thrown together, but was it “church rummage sale” thrown together? It’s the side-braid I think that really kills it for me. Without the side-braid, maybe this outfit could have escaped its fate of making Carrie resemble a third grader who got dressed on her own. However, this outfit does give me Aidan vibes, and if Carrie is wearing this outfit because she’s trying too hard to seem outdoorsy for Aidan, then I forgive it.

This is better! I… I think I like it? The little kicky Bavarian hat? It’s FUN. The jacket? Gorgeous! Billowy pants? Perfect for a summer event. I even love the two purses, which feels just “Carrie” enough. Miranda looks fantastic. Ever since the films, I sort of resented the way they started dressing all of the main girls in couture, as if they were all equally fashion-forward this entire time. I get it, if I was Cynthia Nixon I wouldn’t want to have to keep wearing taupe skirt-suits while Sarah Jessica Parker was in Manolos. But there’s still a point where you have to remember who the actual characters are. Miranda and Charlotte are more conservative in their clothing than Carrie, and that’s fine! This dress feels like a good compromise, although I doubt law partner Miranda Hobbes would ever buy a sorbet-colored purse instead of a briefcase she could bring to the office.

Are gaucho pants back? No, no, hold on a second, we need to talk about this? Are gaucho pants back? I can’t be the one to make this decision, I was fooled once, when I was in seventh grade and my mall uniform was a Junk Food T-shirt layered above a long white tank top, paired with piling stretchy black gaucho pants that hit the widest part of my calf. I was so distracted by the gauchos that I almost didn’t notice Carrie’s blue shoes. Are those Big’s proposal Manolos? (Stanford, you look great as always.)

I think this is the same outfit as above, but from a different angle, and I appreciate it because now I see that we’re getting a Big Flower Moment (BFM) and I can tell that the pants are a cool teal-y emerald that I like.

The girls! Well, three out of four. Love Carrie’s bright pink and green bag here. No notes, Carrie. Miranda looks a little Little House on the Prairie for me. (She’s not a cowgirl; she’s a Harvard-educated lawyer! Why all of the espadrilles?) Charlotte’s ship dress would be perfect Connecticut prep if we didn’t have that T-shirt underneath? I still like it, I just don’t think Charlotte would take that sort of fashion risk. Give the girl a cardigan if she wants to cover her shoulders!

This is a mess. I can’t talk about any of this.

OK, this strikes me as a quintessential Charlotte outfit, and I can’t understand why Carrie is in it. Seriously. Look at the outfit but scroll so that Carrie’s head is covered. A high-necked striped dress? A pastel coat? Sweet white sandals? It’s CHARLOTTE. If there’s someone out there who takes this as seriously as me, please (1) seek professional help, therapy is an invaluable tool, and (2) tell me I’m right about this!!!

Carrie meeting Big on the street with a bird on her head is giving me PTSD. It even looks like they’re dressed for a wedding. Carrie, stop wearing birds on your head to weddings, it’s bad luck! (Other than that, the skirt and purse are wildly fun. I maybe wish the shoes were black — or maybe even salmon to match the hairpiece? — but I get it. Things with Carrie can never be too perfectly matchy-matchy. If it’s not a little messy it’s no fun.

I already love this show and cannot wait to watch every single episode until the rhythms of pithy dialogue and voiceover puns haunt me in my dreams.

More like this
This 'One Tree Hill' Wardrobe Error Is Going Viral On TikTok
By Brad Witter
Cruz Beckham Teased New Music With An Adorable Nod To Mom Victoria Beckham
By Stephanie Topacio Long
The Banned 'Friends' Ad Shows Monica As You’ve Never Seen Her Before
By Sam Ramsden
Ashton Kutcher Wants Danny Masterson “To Be Found Innocent” In Rape Retrial
By Jake Viswanath
Get Even More From Bustle — Sign Up For The Newsletter
From hair trends to relationship advice, our daily newsletter has everything you need to sound like a person who’s on TikTok, even if you aren’t.