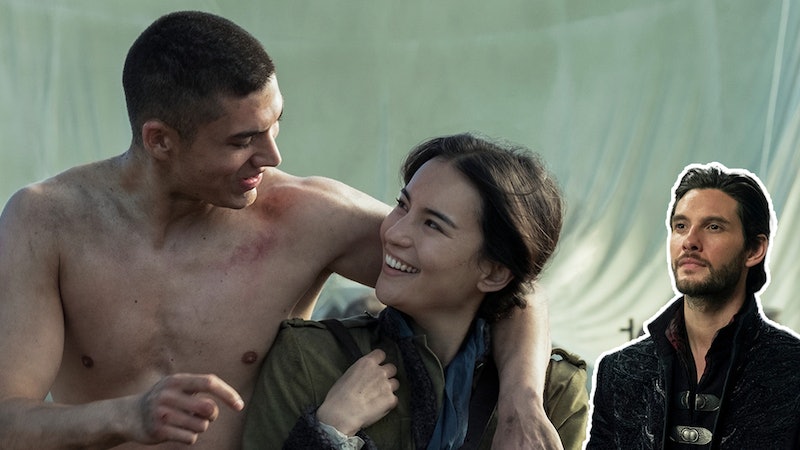 Ben Barnes as General Kirigan. Archie Renaux as Mal. And Jessie Mei Li as Alina. If you’re a fan of the Grisha trilogy, you know that not all of these characters are supposed to be likable. Stories must have their villains and their love triangles, after all. But we’re telling you it’s going to be hard to dislike anyone based on the stellar, lovable actors playing these characters.

We caught up with the Shadow And Bone trio almost a year after they had finished filming and six months after the last time they had seen each other — which was also the exact day one of them became a parent. (You’ll have to watch to find out who, unless you’ve already been stalking them in preparation for the series.) No matter their distance, this cast has an undeniable chemistry that even shows up in their accidental (or was it *destiny*?) matching outfits.

Watch the video above to get the inside scoop on their characters’ must-have accessories and hypothetical karaoke songs, as well as which actor is the best at green-screen acting and who remembers the most from the books. Finally, don’t miss their zodiac signs in case you were eyeing your most compatible match from this charming love triangle (we know you were).

Check out Shadow And Bone on April 23 on Netflix.

More like this
At 28, Rosie Perez Risked Her Career To Stop Playing Stereotypes
By Gabrielle Bondi
At 28, Debra Jo Rupp Was Living A Much Different '70s Show
By Grace Wehniainen
Brendan Fraser's Emotional Critics Choice Awards Speech Is Total Tearjerker
By El Hunt
Zach Reveals The Chaotic 30 Minutes That Were Cut From ‘The Bachelor’ Premiere
By Grace Wehniainen
Get Even More From Bustle — Sign Up For The Newsletter
From hair trends to relationship advice, our daily newsletter has everything you need to sound like a person who’s on TikTok, even if you aren’t.