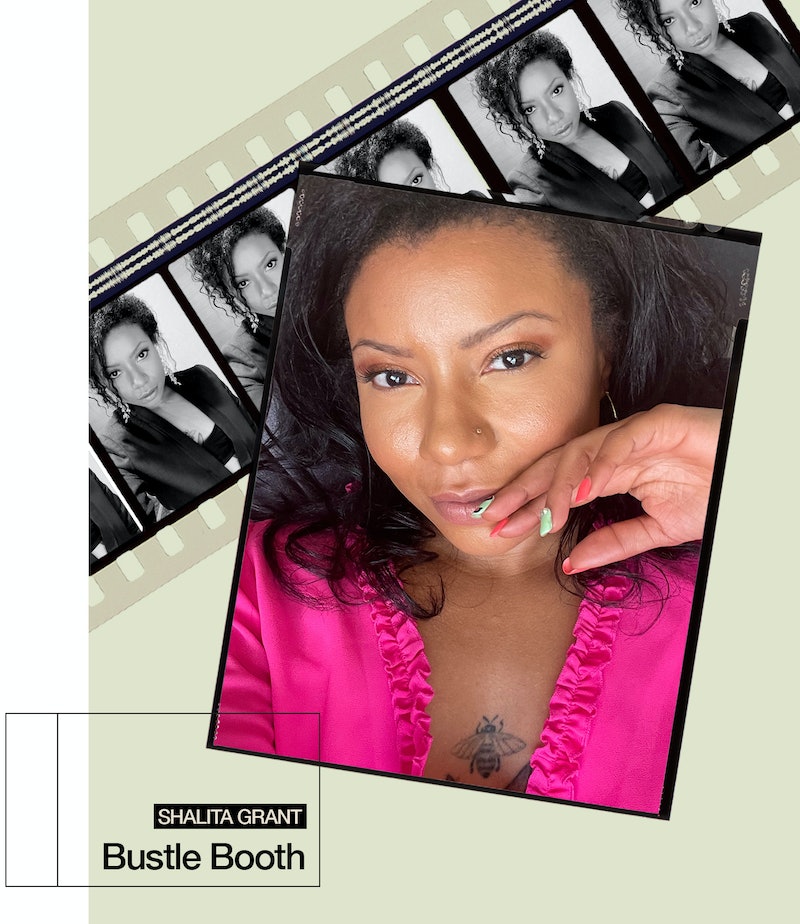 Shalita Grant wasn’t scared of the stalking and violence in YOU Season 3. But she wasn’t prepared to cry on camera. “This was kind of, privately, my kryptonite as an actress,” she tells Bustle, laughing. “I went to Juilliard, I can do Shakespeare, I can do comedy, I can do drama. But a b*tch can’t cry on cue!”

It’s perhaps not surprising that an actor of Grant’s caliber has only one weak point. Since cutting her teeth on Broadway in the Tony-winning play Vanya and Sonia and Masha and Spike, the 33-year-old has portrayed a bevy of characters who could feel like broad cliches, but in her hands feel incredibly specific and nuanced: the no-nonsense special agent Sonja Percy on NCIS: New Orleans, the extremely millennial young Brooklyn defense lawyer Cassidy Diamond on Search Party, and YOU’s queen bee momfluencer Sherry.

She credits that to her acting process, which she’s dubbed her “Nasty Nerd™” side (a term she’s so committed to that she’s tattooed it on her body and registered it as a trademark). To prepare for roles, Grant researches everything she can about her character and builds out a portrait of their psyche. She writes her ideas — which include everything from how her character thinks about themselves, to how other characters talk about them, to what society thinks of their tics and mannerisms — down on paper. “It looks like a serial killer notebook,” Grant laughs. “[But] you want to be able to be creative within a boundary, and so within the boundary anything goes ... Those questions [are] my fence, and then I [get] to play.”

She doesn’t memorize her lines, choosing instead to rely on what she learned in her research, her rehearsals, and a visual memory of the script. Wherever possible, Grant improvises what feels most natural and personal to her in the scene. On YOU, that meant understanding Sherry’s “emotional motor” in the moment and reacting accordingly. “[Before I got divorced], I would’ve had all the judgment in the world [of Sherry], and part of the work would’ve been to scale back the judgment on this woman and her marriage,” Grant says of her character Sherry’s unique relationship with her husband Cary. “Hopefully people understand why she’s so b*tchy [to] Love: she’s protecting a very precarious inner circle … letting some new person in is not easy.”

Grant’s intuitive approach to acting has radiated out into the rest of her life, too. She’s developed a natural hair care line for Black women based on the products she sought out after her time on NCIS left her hair “utterly wrecked,” and she only says yes to projects she would genuinely watch. Right now, that’s shows that are funny and fun. Nothing delights Grant more than someone running all the way across the Warner Bros. lot to tell her that she was “f*cking hysterical” in a scene.

Get to know more about Grant in her Bustle Booth questionnaire below.

Chai tea latte with oat milk and an extra shot of espresso.

“You’re killing me, Smalls” from The Sandlot

The World’s Most Amazing Vacation Rentals

“Sexy and I Know It” by LMFAO, because I love the wiggle section and I do a dance for that part.

Russian exotic pole dance. It’s my style of pole dance and it’s so challenging and beautiful. Teaching myself and eventually nailing my choreography is the best workout inspiration.

That not only am I inspiring, but I’m really f*cking funny.

More like this
'That '90s Show' Star Callie Haverda Got Advice From Mila Kunis & Ashton Kutcher
By Brad Witter
'The Crown' Season 6 Has Suspended Filming "Out Of Respect" For The Queen's Death
By Bustle Staff
Ozzie’s Coming Out Scene With Kitty On 'That ’90s Show' Has Twitter Sobbing
By Brad Witter
Here’s Everything Coming To & Leaving Netflix In February
By Jake Viswanath
Get Even More From Bustle — Sign Up For The Newsletter
From hair trends to relationship advice, our daily newsletter has everything you need to sound like a person who’s on TikTok, even if you aren’t.