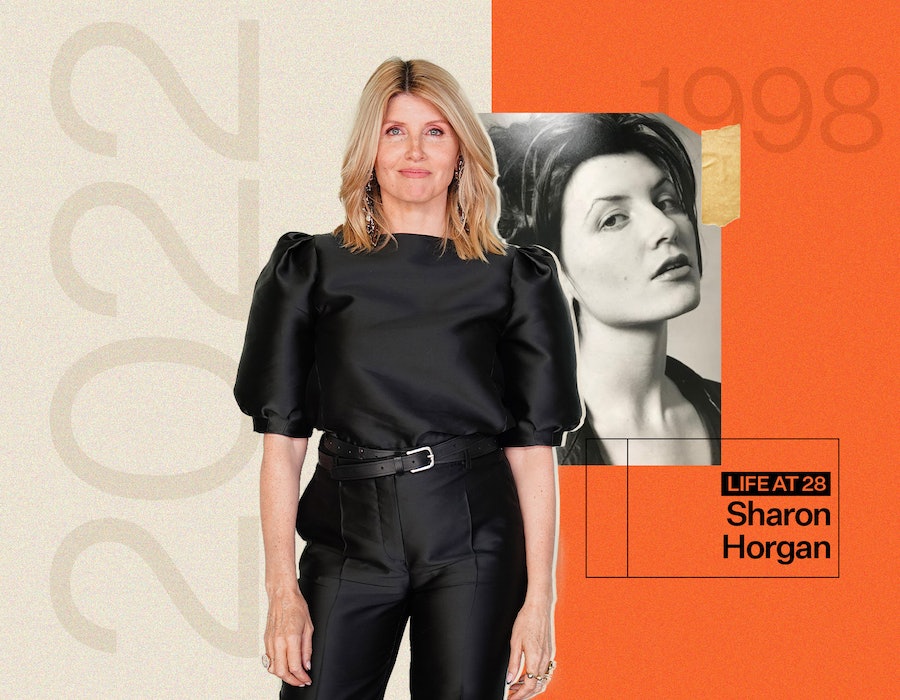 The year was 1998, and the dream was over for a 28-year-old Sharon Horgan. “I remember someone said to me, ‘If you haven't made it at 26, you’re f*cked,’” Horgan says. Her plan to become an actor hadn’t yet come to fruition. Instead, she was living in London and had been working the same temp job for six years. “I was a bit embarrassed I hadn’t pulled it off,” the Irish actor, writer, and producer recalls. “I’d gone to London to make my fortune, as it were. I felt like I should have had more to show for my years.”

The fact that her younger brother Shane had become an Irish rugby star rubbed salt in the wound. “I was like, ‘What the hell is happening? It wasn’t supposed to be this way!’” Horgan says with a laugh. Ultimately, the hunger to succeed for herself and to keep up with her family would inspire her to go back to school at 27 to finish her degree, and along the way, she fell in love with comedy writing. It would take several more years for her breakthrough to arrive: She’d co-write and star in the 2006 BBC comedy Pulling, a show that would immortalize a fictionalized version of Horgan’s own period of mid-twenties aimlessness.

“I was living in London, but I wasn’t in the right part of London, which is kind of what fueled Pulling — this idea that you can be in the most exciting city in the world but two miles away from where it’s all happening,” she says of life at 28. “I saw nothing. I may as well have been in the arse end of nowhere. I had no real quality of life, and it was my own fault. I didn’t put myself out there.”

In the last decade, Horgan, 52, has found a niche in telling realistic and sharply funny stories about relationships, be it the loving yet fraught marriage at the center of Catastrophe, the titular conflict at the center of HBO’s Divorce, or Motherland’s depiction of parenting as a comedy of errors. Her latest project, Apple TV+’s genre-bending comedic thriller Bad Sisters, sees Horgan explore the bonds and limitations of family through the Garvey sisters, who plot to murder their sadistic brother-in-law. Like many of her projects, Horgan developed, executive produced, wrote, and stars in the series. After years of watching the clock at work, she’s now too busy to twiddle her thumbs.

Below, Horgan talks squatting in Camden, listening to dub music, and looking for Britpop stars at the pub.

Take me back to 1998. Where were you living, and how were you feeling about your life and career?

I was living in Camden in North London, in shared low-level accommodation. A bunch of houses had been taken over by this co-op, and we were renting them from the council. Rent was very reasonable, [so I] had a certain amount of leeway to be a student or take a part-time job. So I just thought, “Sh*t. I’d better start taking this thing seriously,” and I went back to third-level education.

At that point, I wanted to be an actor, but it wasn't happening. I was thinking I should get a proper job. I was in and out of fairly suspect... not suspect, but not the right relationships. Just a lot of boys who were into not very safe things. I was just trying to find someone.

What did a typical night out look like for you at 28?

I’ve come from this world of squatting, where you would take over a house, school, or old church, and squat until someone threw you out. There was quite a big tribe of people living an alternative lifestyle. I was at the edge of that, because I was very attracted to it, but I had this weird work ethic that made me want to go to work every day, that made me look for courses in theater. It made me want to go back to school — whereas there was an awful lot of partying going on.

I'd started writing with Dennis [Kelly, co-creator of Pulling]. He’d come to my house and we’d go upstairs and write on my sh*tty computer for a few hours and then go to the pub. There was a famous pub in Camden called The Good Mixer. It’s where a lot of the Britpop people would hang out, so you'd go there in the hopes of maybe spotting Damon [Albarn] from Blur.

Were you a big fan of Britpop at the time?

Yeah, and not just Britpop but PJ Harvey, for example, who is actually the music on Bad Sisters. It’s been the most surreal joy to suddenly be collaborating with her. I listened to a lot of The Fall. It was kind of depressing but very musically involved, and lyrically where my head was at. So a lot of that, a lot of dub, a lot of stuff that suited my lifestyle.

It seems like you were living a pretty frugal lifestyle. What did you splurge on?

I don’t want to say what I splurged on! But it wasn’t clothes and it wasn’t food. [Laughs.]

You have such a distinctive style in all of your shows. What was your style was like at 28?

I was a hippie, grungy kind of Camden head. To get into this co-op, I had to do an interview, so I borrowed a skirt and blouse from my sister to go to meet [my roommates, who were] a nurse and a teacher, and present myself as a human woman, as Tina Fey would say, and they accepted me. Then I went back to how I was dressing [normally], which was grungy. A couple months later, the teacher went, “You dressed up for the interview, didn’t you? We’ve just realized what you [actually] look like and how you presented yourself.”

I hope I always had a sense of style. I think I did, because I really cared about clothes. But I had no money and I didn’t mind if I was covered in holes. I didn’t mind the odd stain.

That was in style at the time!

Yeah, and I didn’t have a washing machine.

Well, I’d given up on my dream, so I was envisioning working within the fringes of the industry. I thought if I went back to school and I got my degree, I might be able to find a way into production. I started being much more practical. I did a word processing course, I learned how to type, I did an editing course. I started doing creative writing as part of my degree, and I fell in love with writing.

Success came a bit later for you, in your 40s and 50s, and you’ve hit your stride in the last decade or so with Catastrophe, Divorce, Motherland, and now Bad Sisters. Do you think you would have been prepared to handle this kind of success at 28?

No, I don’t think so. I don’t think I had the right head on me, and I wasn’t necessarily doing it for the right reasons. I probably just wanted some attention. I’m from a big family. I wanted someone to look at me. Whereas now, I have a deep desire to make content and to get better, to be really, really good at what I do.

I feel like if it hadn’t been out of reach for so long, I wouldn’t be as grateful as I am. So it’s good. It was the right thing to happen to a person like me, I think.

Was there ever a moment you felt like you’d “made it”?

I get asked that quite a lot actually, and I’m always like, “Well, it sort of depends what happens next.”

It really, really is. When Pulling happened, I thought, “I’m making something I love with my best friend, in the medium I’d always dreamed of working in. I’m writing a vehicle for myself. It’s ridiculous. How can it get better than this?” But that was followed by five years of not being able to do that [after Pulling ended]. I was kind of spiraling down a bit, and then Catastrophe came and I spiraled back up, and that felt like it.

But in this business, you’re constantly moving. You never really get a chance to reflect on anything, because you’re on to the next thing, and that next thing could be a failure or a success. It keeps you guessing, and I feel like that’s a good thing.

I’d give myself a bit of a talking to, actually. I put stumbling blocks in my way constantly because I didn’t want to be seen to fail, so I never really tried hard enough to get it. I would tell myself to pull my finger out and, I don’t know, get a washing machine, just smarten up my act. Call my family more and get back to Ireland more. I didn’t feel like I’d achieved anything, so I felt a bit embarrassed to return. I always felt that I would go back triumphantly, and because I couldn’t, I went back less.

I think she’d be pretty impressed, actually. Is that bad to say?

It’s so far from where I was. I think she’d see someone who’d changed quite significantly, in terms of what she thought she was capable of.

More like this
At 28, Debra Jo Rupp Was Living A Much Different '70s Show
By Grace Wehniainen
At 28, Rosie Perez Risked Her Career To Stop Playing Stereotypes
By Gabrielle Bondi
'That '90s Show' Star Callie Haverda Got Advice From Mila Kunis & Ashton Kutcher
By Brad Witter
'Bling Empire: New York’ Star Dorothy Wang Wants To Try 'The Simple Life'
By Alyssa Lapid
Get Even More From Bustle — Sign Up For The Newsletter
From hair trends to relationship advice, our daily newsletter has everything you need to sound like a person who’s on TikTok, even if you aren’t.