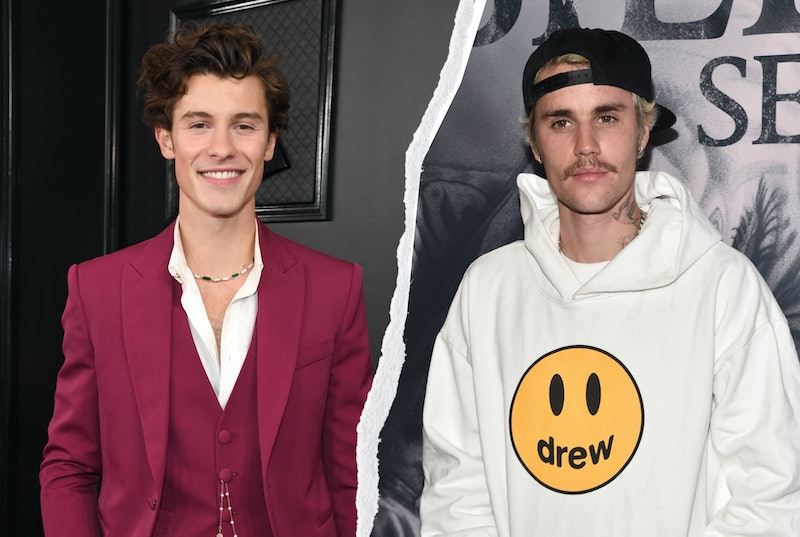 Before Shawn Mendes and Justin Bieber collaborated on sad boy anthems about the perils of fame, the Canadian pop stars had a friendship that began with one question: "Who is Shawn Mendes?" Now, the two have become much more familiar with one another. On Nov. 20, for example, they dropped their first-ever collaboration called "Monster." And in celebration of the new song, we're looking back at Mendes and Bieber's friendship evolution — from when they were just strangers all the way through to the debut of "Monster."

From the get-go, Mendes and Bieber were compared to each other due to their relatively similar stories: At a young age, the two Canada natives became global pop sensations who had to learn to navigate fame. This is, of course, all front and center in the lyrics of "Monster." Despite tabloids pitting the two against each other, though, it would be presumptuous to state that they ever had any real beef. Let's roll the tapes for Bieber and Mendes' friendship timeline, shall we?

September 2015: The Infamous "Who Is Shawn Mendes?”

Bieber appeared on WPLJ-FM Radio in September 2015 to promote his song "What Do You Mean?" from his fourth studio album, Purpose. At the time, Mendes' own pop career had been blossoming with the debut of "Stitches." When asked about the rising star, Bieber famously responded, "Who is Shawn Mendes?" Mendes, for his part, let it be known that there were no hard feelings.

Constant comparisons might be daunting, but Mendes has always taken them in stride. In an interview with ETALK in June 2018, Mendes addressed his ex-girlfriend Hailey Baldwin's relationship with the Biebs and the comparisons between the two, offering nothing but words of support. "I love them both. They're both really awesome people," he said. "When I first started out, everybody was like, 'Oh, how do you feel about being compared to Justin?' I was like, 'What do you mean, how do I feel?' That's the best thing anyone could say to me. He's the man."

Mendes' support continued well after Baldwin and Bieber's engagement. The Wonder musician told Australian TV show The Project in July 2018 that he texted his ex-girlfriend to congratulate her on her impending nuptials. "I texted Hailey the day of and I said congrats. That's what it is," Mendes said. “Everybody wants there to be more — there's not."

Because the questions about Baldwin and Bieber were aplenty, Mendes remained diplomatic when asked about the two. "It's great to see two amazing people get together," he told Variety in August 2018. "If you know them both separately, it does make a lot of sense — a little bit of yin and yang."

Post-engagement, Bieber declared his love for his betrothed by constantly sharing photos of the model on Instagram. However, when fans noticed that Mendes "liked" one of the images, all hell broke loose. Fortunately, Bieber set the record straight and explained in the comments of a post that Mendes and Baldwin are friends. Exes can still be friends, can't they?

As his meteoric rise continued, Mendes was hailed the "Prince of Pop" by Observer magazine in April 2019. The singer shared the achievement on Instagram, and Bieber left a comment under Mendes' comment that raised eyebrows in both fandoms. "Gonna have to break a few more records to dethrone my title there bud," the "Holy" singer wrote. He then challenged Mendes to a hockey game for the title. After some fan backlash, Bieber clarified that the comment was just "playful jargon," reiterating that there is no animosity between the two. Mendes, for his part, took it in stride with an "LOL." And yes, he agreed to that hockey match.

In a full-circle moment, Mendes and Bieber dropped their new single and music video for "Monster" on Nov. 20. Before the track's release, Bieber even referenced his infamous "Who is Shawn Mendes?" moment and brought back the clip on Twitter. "Who's @ShawnMendes?" he joked. Mendes then replied with a photo of himself alongside actor Jacob Tremblay, who recently starred as a young Bieber in Justin's "Lonely" music video. Mendes wrote, "You don't remember us taking this pic together?" From "Who is Shawn Mendes?" to "Monster," Bieber and Mendes' friendship evolution has been quite a journey.