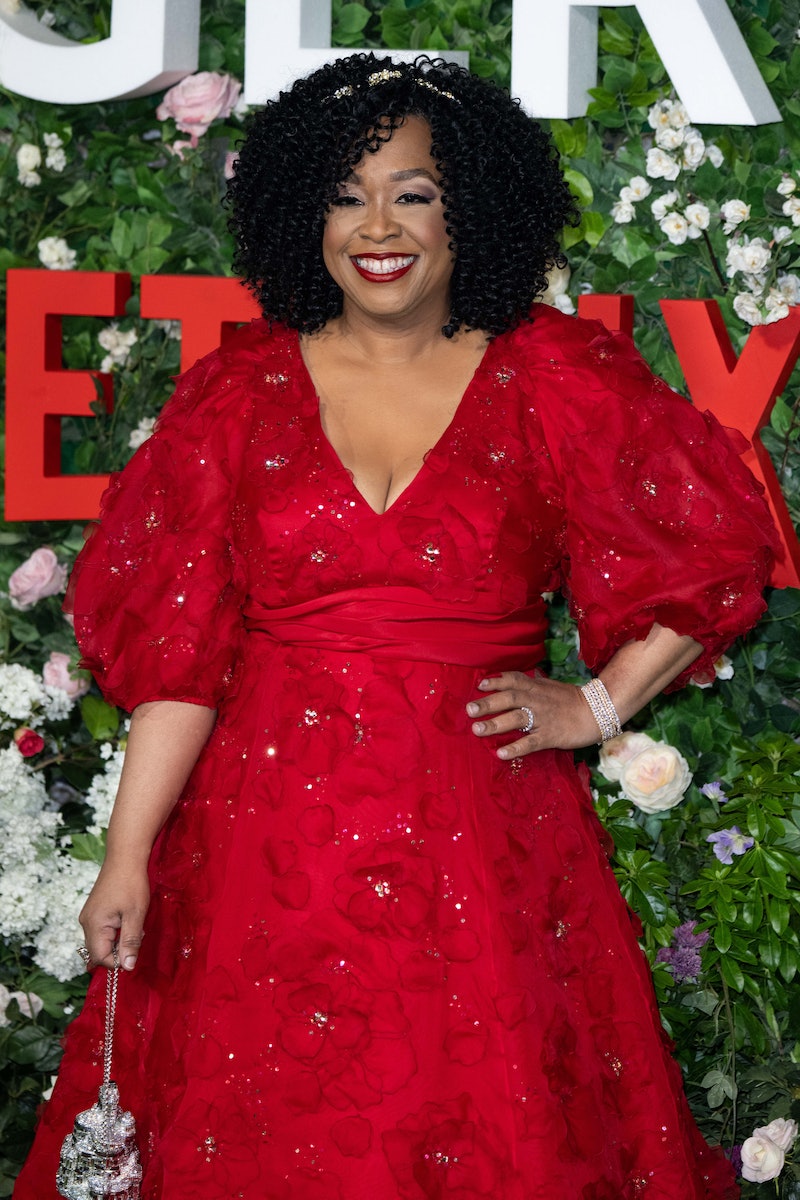 Calling Shonda Rhimes the queen of TV might be an understatement. She has had a hand in producing, creating, or writing nearly a dozen programs that have made it to the airwaves and which have run for a collective 50-plus seasons (and counting). Ratings juggernauts like Grey’s Anatomy and Station 19 still regularly beat out the primetime competition, and with a growing batch of conversation-starting smash streaming hits like Bridgerton and Inventing Anna now included in her oeuvre, Rhimes' reputation as a superproducer speaks for itself.

After graduating from the MFA program at USC School of Cinematic Arts, Rhimes worked on the 1995 PeabodyAward-winning documentary Hank Aaron: Chasing the Dream and the 1999 HBO movie Introducing Dorothy Dandridge. A few years later, she would write the pilot for Grey’s Anatomy, which solidified her in the world of television. Throughout her career, she has garnered five Primetime Emmy nominations and could earn more in the near future.

Her proven track record of launching successful TV shows made her such a valuable asset that she was poached away from ABC by Netflix in a historic deal that was reportedly worth as much as $150 million, making her one of the highest-paid showrunners in the industry. As one of the richest people in TV, what is Shonda Rhimes’ net worth? Read on to find out where all that money comes from.

The vast majority of Rhimes’ millions have come to her thanks to her many successes with ABC. In fact, when Forbes estimated her net worth at a whopping $135 million in 2018, the publication claimed it was almost entirely thanks to her deal with the network.

Rhimes scored her first big break in TV with Grey’s Anatomy, which has gone on to become one of the longest-running and most beloved primetime dramas ever. The series premiered in 2005, and in early 2022, ABC renewed it for a 19th season. The dramatic series remains incredibly popular, as the latest season’s premiere pulled in more than 14 million viewers across all platforms. As per Celebrity Net Worth, Rhimes had volunteered in a hospital during high school, which likely sparked her interest in hospital environments at a young age.

Following the success of Grey’s Anatomy, Rhimes continued to churn out programs for ABC, and throughout nearly two decades, she and the network have enjoyed a highly productive relationship. Some of Rhimes’ most-watched shows on the channel include Scandal, How to Get Away with Murder, Private Practice, and Station 19, which all ran for a number of years. She has also gotten several series on the air that only lasted for one or two seasons, such as Off the Map, The Catch, Still Star-Crossed, and For the People.

According to Forbes, Rhimes reportedly earned $10 million per year from ABC in the several years before the money magazine published her net worth in 2018. She also took home 10% of the profit when programs like Scandal, How to Get Away with Murder, and Private Practice were sold into syndication to both Netflix and Lifetime for at least $1 million per episode, according to Forbes. The Wall Street Journal estimates her production company Shondaland had generated more than $2 billion in revenue by 2017, and since then the firm has launched additional hit shows and expanded into other arenas, such as web content and podcasts.

Grey’s Anatomy may have put Rhimes on the map, but it wasn’t the first idea she pitched to ABC. She initially came to the network in 2003 with a show about foreign war correspondents, but it wasn’t purchased. Instead, then-Disney COO Bob Iger suggested she try writing something in the medical world, which was clearly a smart pivot, and the rest is history.

In 2017, as Rhimes continued to rule at ABC, she signed a massive deal with Netflix that was heralded at the time as a “landmark” moment in the rise of streaming media. The New York Times reported that the contract may have been worth as much as $150 million. The agreement allowed her to continue working at ABC, but she couldn’t collect any money for her skills. Giving up a $10 million salary is not easy, but she’s making even more cash from the streaming giant.

The first program Rhimes launched with Netflix was Bridgerton, which became an instant success, as 82 million subscribers watched in the first month the show was available, according to the streamer itself. In 2022, Netflix released the Shondaland-produced miniseries Inventing Anna, which was another immediate success story, as it managed “the most viewing hours for an English-language series in a week” on the platform, according to the BBC. The program racked up just under 200 million viewing hours in one seven-day period.

Several reports suggest that at least at one time, the talented producer and writer had a dozen projects in the works for the streamer, including two more seasons of Bridgerton and a spin-off based in that world.

When all is said and done between television shows being sold to streamers, getting syndicated, or simply from production deals with major companies, Celebrity Net Worth reports that Rhimes brings in about $1 million per episode of television.

Before she became one of the top power players in TV, Rhimes was already a working writer and producer, though it took her some time to land a huge win. She got her start working as a research director on the documentary film Hank Aaron: Chasing the Dream in 1995, and moved into writing soon after. Her breakthrough came when she wrote the scripts for two moderately successful films of the early aughts: the Britney Spears-starring Crossroads (2002) and The Princess Diaries 2: Royal Engagement (2004). While neither were critically acclaimed (in fact, both films have Rotten Tomatoes scores below 30%), they did earn money. Crossroads pulled in more than $61 million after costing $12 million to make, while The Princess Diaries 2 brought in nearly $135 million, much more than its $40 million budget.

Rhimes has made millions as a writer of scripts, but it wasn’t until 2015 that she published her first book, Year of Yes: How to Dance It Out, Stand In the Sun and Be Your Own Person. The title went on to become a New York Times bestseller.

For many years, Rhimes and her production company Shondaland were focused on nothing but ruling TV, and they succeeded brilliantly. In 2017, the woman behind so many hit shows teamed up with Hearst to launch Shondaland.com, a lifestyle website. The publication creates articles about health, wellness, and culture, and shares missives from Rhimes herself, as well as updates on programs that come from the same company. What she makes from this venture isn’t entirely clear, though the site has now been up and running for half a decade.

In 2019, iHeartMedia recruited Rhimes to create Shondaland Audio, a podcast division of her successful firm. The branch has produced such popular offerings as You Down?, Katie's Crib, Go Ask Ali, Criminalia, and the official podcasts attached to the production company’s TV shows Bridgerton and Inventing Anna. As is often the case, how much money the conglomerate paid to be in business with the creative was never shared publicly.

With all her millions, Rhimes loves to spend big on real estate, and she reportedly owns quite a few properties in Los Angeles, CA as well as at least one in New York City that reportedly cost $11.75 million.

Most of these purchases have cost her handsomely, but some have potentially netted her a profit as well. Rhimes snapped up a home in LA’s ritzy Hancock Park neighborhood in 2010 for $5.6 million, which she turned around and sold in 2019 for $7.16 million. Those list prices suggest she made more than $1.5 million, though, of course, that’s not taking into account any work she paid for in the near decade in between sales.

Rhimes owned another spot in the same neighborhood, and in early 2022 she set a record for the biggest price tag in the area when she sold her nearly 100-year-old home for $21 million. She’d purchased that property in 2014 for $8.8 million, and she renovated the estate before turning it around and selling it again.

What Is Shonda Rhimes’ Net Worth?

According to Celebrity Net Worth, Rhimes is worth a reported $140 million. While her massive Netflix and ABC deals don’t quite put her net worth on the same level as fellow TV industry titans like Chuck Lorre (worth $600 million), Dick Wolf ($600 million), or Greg Berlanti ($200 million), she is still an incredibly wealthy woman, and certainly one of the most successful in the field.

More like this
Is Blake Lively Or Penn Badgley The Richest 'Gossip Girl' Star From The OG Series?
By Hugh McIntyre
The First Trailer For 'That '90s Show' Includes So Many Nods To The Original Series
By Jack Irvin, Alyssa Lapid and Grace Wehniainen
The ‘Emily In Paris’ Season 3 Trailer Teases Major Career & Love Crossroads For Emily
By Bustle Staff
Mike Tindall’s High Earnings Amount To A Royal Flush
By Darshita Goyal
Get Even More From Bustle — Sign Up For The Newsletter