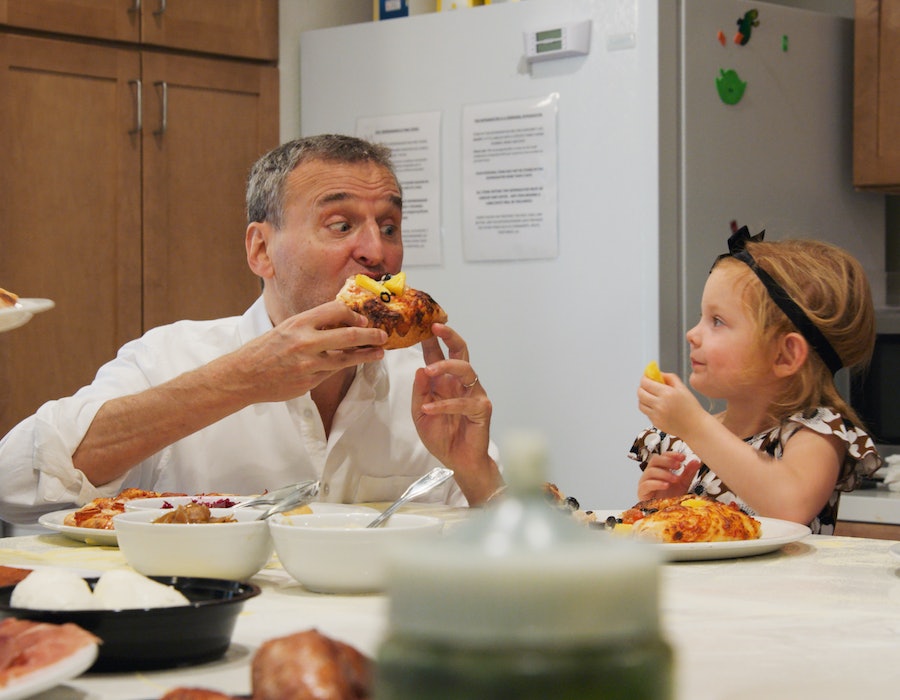 In an era where the food documentaries category on Netflix offers a seemingly infinite scroll of options, having one’s own food and travel show is about as novel as visiting the Eiffel Tower. So when Everybody Loves Raymond creator Phil Rosenthal came up with a pitch for his own contribution to the genre, he used his trademark self-deprecation to set Somebody Feed Phil apart.

“I said, ‘I'm exactly like Anthony Bourdain, if he was afraid of everything,’” Rosenthal tells Bustle. “I'm not going to Borneo to get a tattoo from tribesmen who are drunk and pounding it into my chest with nails — no thank you! I'm going to need a hotel, I'm going to need a bed with a pillow.” Yet Somebody Feed Phil, which premiered on Netflix in 2018, was always more than a humorous fish-out-of-water conceit. “I figured if I was like that, maybe I could talk to other people who were like that, or were even more scared than me to go somewhere and try new things. It turned out to be something that people wanted.”

Five seasons in, Somebody Feed Phil has proven it’s as much about food and travel as it is about joy. Yes, the mole in Oaxaca looks mouthwatering, but it’s Rosenthal’s euphoric reactions — when his eyes widen to almost cartoonish circumferences, or he shakes his entire body with delight taking bite — that imbue the show with unimpeachable sincerity.

So, too, do his interactions with everyone who enters the frame, from a guest, to his wife and children, to the child of a passerby, to a stray dog. Even moments of sadness inspire a special kind of wistfulness, as when Season 5 honors the passing of Rosenthal’s parents by replacing their recurring video-call segment in previous seasons with jokes told in their honor.

“People say, ‘It looks like you love everything.’ And I do love everything that I put in the show,” Rosenthal says of the food that makes it into the final cut. But it’s clear that goes for people, places, and things, too.

Below, Rosenthal talks about his first trip to Europe, viewing his parents as sitcom characters, and what it feels like to be the poster boy for boundless enthusiasm.

A lot of New Yorkers pride themselves in never leaving, but you've obviously left a lot to go places. Do you remember the first time you left the country?

I love this question because it changed my life. Growing up we didn't have a lot of money at all, and we hardly ever went anywhere. I think I was nine before I went anywhere outside of the state — I went to Atlanta for bar mitzvah and I thought that was traveling. But it wasn't until I was 23 that I got a courier flight to Europe on a DHL. DHL, before they had their own cargo planes, they sent their stuff as a passenger's excess baggage. So they needed people to take an economy ticket to anywhere they went in the world. So I went, I believe it was to Frankfurt on a plane. And I got off in Frankfurt and I handed the luggage tags to a man holding a DHL sign. And then those two weeks were mine to do what I wanted.

I met a friend who did the same flight the day before and we hopped on a train and went right to Paris. When I got out of that train station, I think my life was changed forever. It was absolutely spectacular, walking down the streets in Paris, seeing the architecture and the landscaping and how beautiful it was and how much care was taken in preserving that, and the history behind every building and the whole city. I just couldn't believe it. And then as if that wasn't good enough, I ate something.

And that was that.

And the top of my head came off. I went from there overnight to Florence, Italy, and I met these two kids who were on the train who were my age and we stayed up all night drinking and talking and laughing and we could barely understand each other. They're my lifelong friends, Dania and Dario. And then they said, "Here's our address. Here's the bakery where we work."

I go to the bakery — this was 1983 — and I'll never forget it. They fed me like no tomorrow. [The baker] gave me everything in the bakery. And then he called his friends to say, “A boy from America is here!” And the lady from down the street, she brought me a sandwich that she made and somebody else brought me gelato from their store. Well, how could you not fall in love, not just with Italy and these specific people, but with the whole idea of traveling? It's like they conspired to make my life beautiful.

It also seems like everybody has wanted to feed you from an early age, which is great for you!

I have welcomed it. I like the title of our show because it connotes a guy who really needs to be fed, who really can't take care of himself. And that's partially true.

“I'm just using food and my stupid sense of humor to connect with you.”

The show is about your travels, but there’s a strong emphasis on your family — from your episodic Skype sessions with your parents when they were alive, to your inclusion of your wife and your kids on some trips. Was including your family, as opposed to more culinary professionals, a conscious choice?

I don't know. I feel like family and friends were always part of everything I do. I Skyped with my parents every episode, not just of Somebody Feed Phil, but of the PBS show [I’ll Have What Phil’s Having that came before it] as well. That all started when I Skyped them from Moscow when I did the movie Exporting Raymond, and they were the hit of the movie. And I thought, "Oh, I’ve got to remember that if I ever have any other kind of show."

I come from the sitcom world, and these are the best recurring characters you could hope for. They're really funny, they're really sweet, and we love seeing them. And I miss them terribly.

I’m so sorry about the passing of your father Max, but I loved how you’re keeping the video call segment going this season by having friends tell jokes in his honor. How did you land on that idea?

It was almost immediate. First my mom passed and we did a season without her and it was just my dad. When he passed, it was natural to me to think, what would he like? We liked his jokes. And what better thing to have as a legacy? I have my family and friends now to carry on his tradition.

You might think, what does this have to do with food? Nothing. It has to do with the bigger theme of what the show really is about, because the theme of the show really is not food. I'm just using food and my stupid sense of humor to connect with you. And it's that human connection that I think travel allows you to have. I hope that comes across.

It does, in that it’s impossible to watch this show and not feel your infectious enthusiasm. How does it feel to have that be something that people associate with you?

I could cry thinking about it, because it's a beyond a dream. I feel like you're talking to the luckiest person you're ever going to talk to. Because I know how hard a lot of people's lives are.

You can't create anything until you like it. You have to like it before someone else likes it. So all you're seeing is my natural enthusiasm for what I get to do. But the point of the show is you can do it [too]. Turn this off and go!

Somebody Feed Phil is all about traveling and trying new things. What's been one of the biggest things you’ve learned while working on it?

Here's a generalization: Most people around the world are so much better than their governments.

It is true. I've met a lot of them. I haven't seen the whole world yet — I probably haven't even scratched the surface. But most people want what you want: Clean air, food and water, to be safe, to have a better life for their children and their families, right? And to laugh and have joy in their lives.

I also find that no matter where I go, you can get a great meal almost anywhere. And it's funny, no matter what culture I meet, they all say, “No, we really like to eat,” or, “You haven't eaten until you’ve sat at a Greek table.” Oh, really? Guess who feels the exact same way? Chinese people, Italian people... every person on Earth is like, "Wait, you want to see eating? Wait until you come to our house."