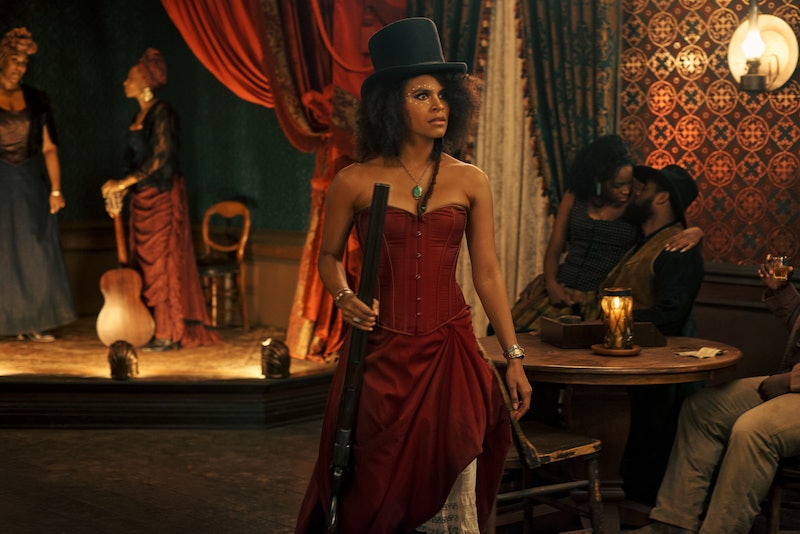 In the new Netflix film The Harder They Fall, Stagecoach Mary (played by Zazie Beetz) is a lively performer who once ran with outlaw Nat Love (Jonathan Majors). In real life, she was just as spirited — but she definitely never had a relationship with Love, and her real-life story only bears a passing resemblance to the one presented onscreen.

The real Stagecoach Mary, aka Mary Fields, was the first Black woman to work as a mail carrier for the United States Postal Service. In her time, she was formidable individual whose skills were legendary in her home state of Montana. But Fields’ story was lost to history until the 21st century, when she was rediscovered. She’s since inspired music, a screenplay, and even an appearance on the show Hell on Wheels. Below, what to know about the real Mary Fields.

Who was Mary Fields?

Fields was reportedly born in Tennessee as an enslaved person in the 1820s (she never knew her actual birthday), and grew up as an orphan. After gaining her freedom following the Civil War, she worked with a friend, Mother Mary Amadeus, at the Ursuline Convent of the Sacred Heart in Toledo, Ohio. Fields went out west to support Amadeus when she fell ill with pneumonia, and ended up staying in Montana, working at St. Peter’s Mission.

She was said to have “the temperament of a grizzly bear”: Fields was six feet tall and over 200 pounds, and always carried a gun underneath her apron. A smoker and drinker with a foul mouth that offended some of her more religious peers, she was also a capable worker and a fiercely loyal person who loved children. She was apparently involved in arguments, fights, and at least one duel, according to an Ebony article: "No one remembers how it turned out, but Mary was still around when it was over."

After an argument led to her and a coworker to draw their weapons, she was sent away at the order of the local bishop. Fields went on to work odd jobs and tried to make a living in the restaurant business, twice trying to launch restaurants (with the help of Mother Amadeus) that ending up failing because she gave too much food away — she let anyone who couldn’t pay eat for free.

Fields was a reliable mail carrier on a “star-route.”

In 1895, at roughly age 60, Fields began working as a carrier for the U.S. Postal Service, becoming only the second woman to ever do so and the first Black woman ever be hired at the USPS (the Ursuline sisters apparently helped her get the job). As a star route carrier, Fields worked as an independent contractor who used a stagecoach to deliver mail in a rural area over difficult terrain. She served Cascade, Montana, and the surrounding areas for eight years — and was reliable to the point of fanaticism. To do her job, she had to defend the coach against thieves, animals, and frequent inclement weather. When the wagon couldn’t pass through the ice and snow, she would walk, sometimes as much as 10 miles, to get people their mail. She developed a reputation for her impressive reliability, earning the nickname Stagecoach Mary.

Her legacy endured even after she retired.

Fields never married, and she retired from her mail route when she was around 70 to start a laundry business and another eatery, while also gardening and babysitting the neighborhood children on the side. Always generous, she apparently used the money she earned from babysitting to buy candy for the children.

The locals loved her. Fields was exempt from a law banning women from saloons, and became the mascot of the local baseball team; when her house burned down in a fire, the town helped rebuild it. She died in 1914, and had one of the largest funerals the town had ever seen.