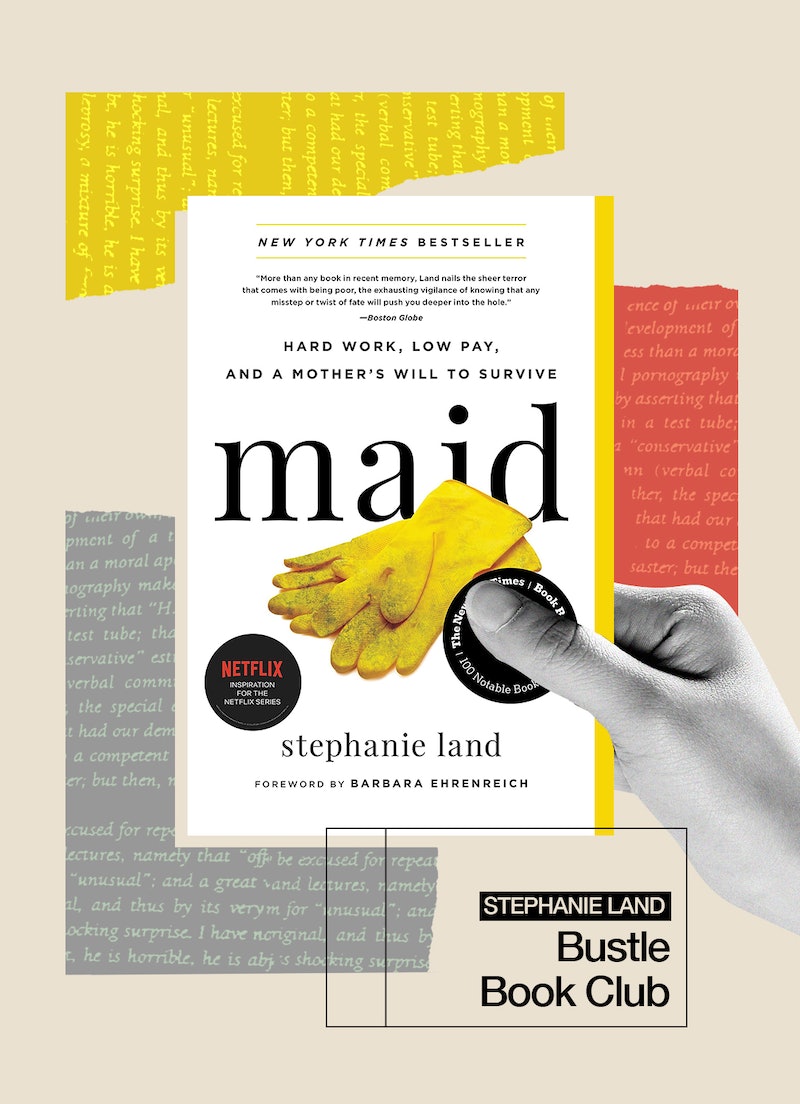 When Stephanie Land was first approached about having her memoir Maid adapted for the screen, she had a few stipulations. The series, she said, had to show how much single parents love their kids, what it’s like to only have $2 in your pocket, and the experience of cleaning a stranger’s toilet. The Netflix miniseries that resulted nailed all three — particularly the toilet-cleaning, for which the team went “above and beyond,” Land tells Bustle.

Land’s book is exceptionally personal, charting her journey from working a housekeeping gig as a single mother to making it as a professional writer. It’s also a searing examination of poverty, the perils of welfare, and the stigmas surrounding service workers. And while Land’s story has a happy ending — Maid went on to become a New York Times bestseller, and President Obama selected it for his summer reading list in 2019 — she cautions against viewing it as a “success story”: “It's not like I just went from welfare to work. At the time that I got the book advance money, I was hungry. I had been off of food stamps for six months, but I hadn’t eaten much in a few weeks because of a paycheck mishap,” she says. “[It wasn’t] the American Dream myth of pulling yourself up by the bootstraps. I got incredibly lucky and a lot of that luck came from privilege.”

While both the memoir and miniseries reflect Land’s matter-of-fact, unsentimental take on her past, the cast and crew couldn’t help but be overwhelmed by the weight of what she’s been through. “I heard someone cried at some point almost every day [on set],” she says. Perhaps they were so affected because it felt so real. Not only is Maid a true story, but Land spent time with the show’s creators early on in the process, touring them around landmarks from her book. “We went around to a lot of the places where I lived,” Land tells Bustle. “We stood outside of my studio apartment, [where I lived in] transitional housing, and I drove them past ‘the cabins’ that are considered the Port Townsend homeless shelter.” Now that it’s all over, she’s ready to let herself feel some catharsis, too. “Being able to press play on Netflix and have this show start, I'll probably start crying.”

Below, Land reflects on giving up notebooks, her plans for a she-shed, and reading Lauren Hough.

On how scoliosis altered her writing process:

My writing process changed a lot in 2008, right around the time that I started working for the cleaning company. I have really bad scoliosis and my entire right arm would go numb, and I lost feelings in my fingers. I still I can't hold a pen [because of it]. As a person who was a daily notebook writer since they were 10, that was really devastating to me. So I had to learn how to write on a computer.

I wrote Maid on an 11-inch MacBook Air that a writing program had given me a coupon for, so I was able to afford it. They paid for 500 bucks of it as a bonus or something. I wrote the entire book in just one big file.

On building a she-shed:

I have a book that I’m supposed to be writing right now, and I’ll get really excited about it, and then one of the kids asks me for chicken nuggets or something. So my husband and I are building a she-shed for me. It's like a 10-by-10 with a little porch that I found on the internet. I got a desk for it and a chair, and I’m just going to try and make it as cozy as possible. It’s in the corner of our yard that has a view, so I’m hoping I can just set myself in there and get some peace and quiet.

I blew through Lauren Hough’s Leaving Isn’t the Hardest Thing in two days. It's a book of essays that’s almost Anthony Bourdain-style, like you’re sitting down next to [the writer] at the bar and they’re just telling you all these crazy stories. Lauren had an essay go viral about being a cable guy, and it was really similar to my essay that went viral about being a house cleaner, so I had been anticipating this book for a long time.

On her Maid playlist:

With writing Maid, I created a playlist that was super specific. The first song that played was “This Will Destroy You” by The Mighty Rio Grande. As soon as I sat down, put the headphones in, and that song started playing, I knew that it was go-time. Some of the songs were my kids’ favorite songs at that time, or songs that I belted out when I was cleaning. I’ll assign certain songs to a subject matter, and listen to them on repeat to get me in the mood.

More like this
Candice Brathwaite Is Over Using Her Own Life For Material
By Shahed Ezaydi
50 Books To Read With Your Book Club
By K.W. Colyard
We’ve All Had Bad Sex. Nona Willis Aronowitz Is Talking About It.
By Sophia Benoit
10 Must-Read New Books Out This Week
By K.W. Colyard
Get Even More From Bustle — Sign Up For The Newsletter