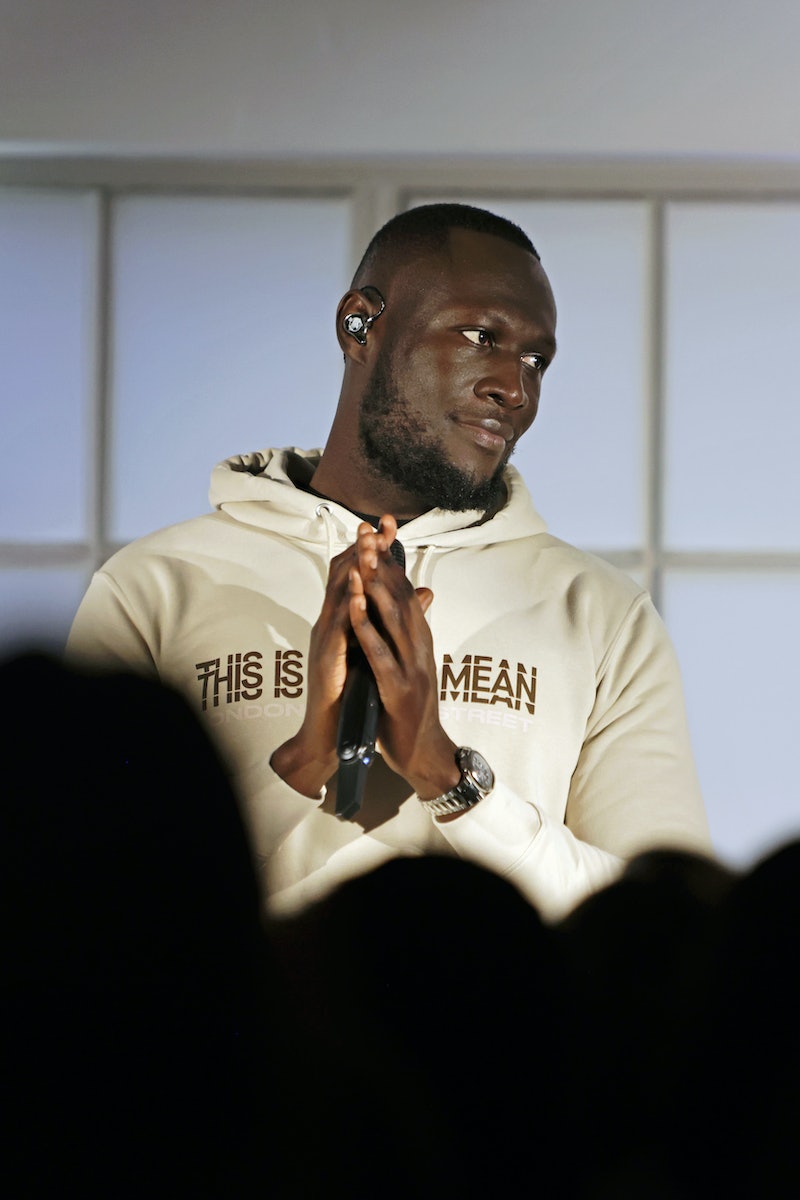 One of the punchiest, hardest hitting moments on Stormzy’s new album This Is What I Mean touches on his rise from independent South London rapper to a Def Jam-signed Glastonbury headliner. Taking stock of his journey to the present, it sees the artist using his platform to raise up other artists he admires, making witty boasts of his successes to date, and digging into what drives him creatively in the first place. “Stormz' got that sauce, this that bolognese,” he declares in the album’s title track.

In Stormzy’s eyes, he’s an artist who can progress creatively and reach ever-impressive new heights without forgetting about where he came from: “I'm Harry Styles, the way I fine-line tread. We’re goin' mainstream.” Once a member of X Factor-formed boyband One Direction, Styles is arguably another artist who has nailed this balance between chart appeal and creative exploration well.

Along the way, Stormzy also nods to his critics and declares himself “Kanye mixed with Donny Hathaway.” He later adds: “This ain't the same man who said his head was heavy,” referencing the title of his 2019 album Heavy is the Head. A diverse offering, that album sampled Tracey Beaker (on “Superheroes”) brought in Ed Sheeran for a guest spot, and made sense of the pressures of rocketing to fame.

“It’s like a sonic explosion. This song happened in so many ways. It really started with this amazing producer called Knox Brown, and this chord progression by P2J. We had this idea for a song where I wanted to use all my favourite artists, like how a painter might use different brushes and different colours,” Stormzy told i-D, discussing his new album’s title-track “This Is What I Mean” with enigmatic producer Rick Rubin. “I didn’t want them to just do verses, I wanted to paint with their voices. So P2J sampled Jacob Collier’s voice, and turned that into something eerie, and we used that as the basis for this song and the sample — it just became more and more epic. It was one of those ideas, like that first song, that evolved over time.”

“It’s about trying to do something that feels good and right, something that strikes a chord within my soul and my spirit. It’s like painting: if it feels right to put some red on the canvas we do; if we want to cover it in blue we do. This song is a testament to that process.”

Below, check out the full lyrics for “This Is What I Mean.”

It's a bigger operation

What's with all the speculation?

Had to close the store for renovations

My cuzzy said "Stormz', man, they're runnin' out of patience, you know"

Time to make a statement

Time to free my mind of limitations

Finesse the majors, that's my form of reparations

They said, "You can't slide, you're a treasure to the nation"

Stormz' got that sauce, this that bolognese

I see you lookin' bothered with your bothered face

Even though we're comin' from a common place

All I see is stars, like we in a Wraith

So give him room to grow and just give him space

And he could be a young, black Jimmy Napes

I said, this is what I mean, yo

All my n*ggas got it, we unanimous

My skeleton is matchin' with my managers'

She love me, 'cause I'm handsome and I'm talented

Hangin' off the bannisters

Tell me, who's gon' pay for all the damages?

Talkin' recky, we gon' ask you where your manners is

I said it from a kid, you should've listened

I manifest the sh*t and then it happened

Said that I'ma do it, then it happens

(P2J up on the rhythm and it's slappin')

I shout my brother Giggs, that's more than rappin'

Ah, all this work that I've been mashin'

Put your boy in the position where I profit off my passion, alright

They don't know about the times I've bled

Give a f*ck 'bout what the timeline said, I do your day streams

I thank God for the life I've led, then get the Wraith clean

I heard them say that grime ain't dead

Mind your business, 'fore you mind my bread

If ten million weren't enough, I make a lifetime pledge

Uh, I can't address your n*ggas on the 'net, the disrespect

They don't wanna give me my respect, it's disrespect

A n*gga doin' numbers, what the f*ck did you expect?

They charge a n*gga fifty every time I miss the jet, ah

I guess I overslept

If she hold me down, then I might buy her a Patek

The mandem hold me back, because they know just how I get

White b*tches rollin' in the deep

Nosedivin' off a yacht, into the sea

Blah, still I keep the blikky on me

B*tch I'm off that thing already

You know I'm on the ting already

Ya know im with a ting already (Issa disrespect)

They don't wanna give me my respect da disrespect

I don't do things the rapper way

All that cappin' on the net, I'll make the mandem blow a cap away

So we just let them n*ggas out the way

I heard Sunday's the new Saturday

We praisin' God, I watch my enemies evaporate

Hallelujah, to be honest, I could plan and do you

But I gotta rise above it, word to Dan Kaluuya

No chance, buffalo stance on my Neneh Cherry

They wanna see the Michael that they see on telly

You man just remind me of my girl, why you never ready?

Oh, please, all my enemies are dead and buried

If we do it, then we do it large, I'm on my Kevin Perry

This ain't the same man who said his head was heavy

Cos you see say, if dey no one listen to you, breddas smoke dem paigons, they don't deserve you

Can't keep you name out their mouth, they say you do this and that, we are tired already

Talk is cheap, I don't do bare talking, diss jiggas are quiet, bredda dey no for tell you

Cos you see say, if dey no one listen to you, breddas smoke dem paigons, they don't deserve you

More like this
“I’m Not Here To Make Friends” Speaks To A New Sam Smith Era
By Maxine Harrison
Mimi Webb’s IRL Situationship Inspired “Red Flags”
By Catharina Cheung
Here’s How You Can Watch The Grammys 2023 In The UK
By Emma Madden and Catharina Cheung
Twitter Is Saying The Same Thing About Beyoncé's Renaissance World Tour
By Shahed Ezaydi
Get The Very Best Of Bustle/UK
Sign up for Bustle UK's twice-weekly newsletter, featuring the latest must-watch TV, moving personal stories, and expert advice on the hottest viral buys.