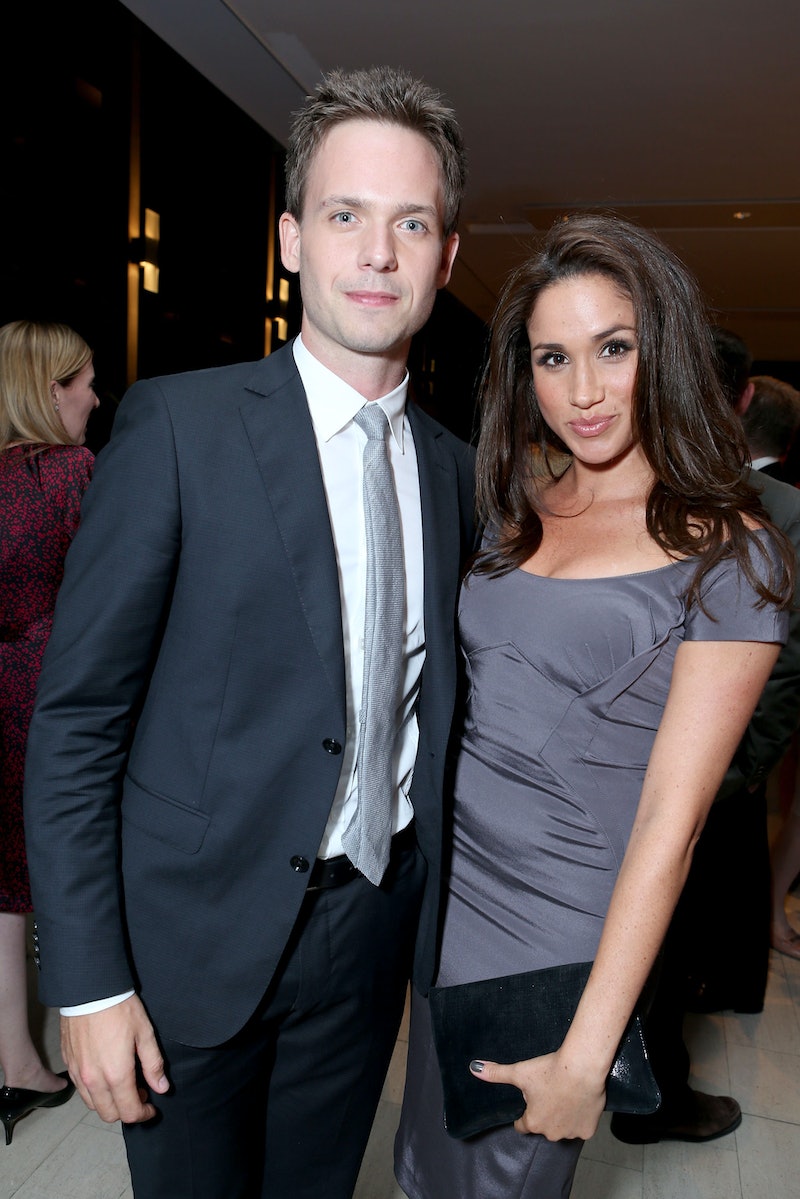 Amid Buckingham Palace's investigation into bullying claims made against Meghan Markle in The Times, an important person from the Duchess's past is coming to her defense. Suits star Patrick J. Adams defended Meghan against the royal family in a series of powerful tweets on March 5. Adams played Mike Ross, the love interest to Markle's Rachel Zane, on seven seasons of the legal drama. Adams referred to his former co-star as "a powerful woman with a deep sense of morality" and the royal family as an "institution that has outlived its relevance, is way overdrawn on credibility and apparently bankrupt of decency."

The 39-year-old actor, who attended Meghan and Harry's May 2018 wedding, recounted his history with the Duchess. "Meghan Markle and I spent the better part of a decade working together on Suits. From day one she was an enthusiastic, kind, cooperative, giving, joyful and supportive member of our television family," Adams said. "She remained that person and colleague as fame, prestige and power accrued. She has always been a powerful woman with a deep sense of morality and a fierce work ethic and has never been afraid to speak up, be heard and defend herself and those she holds dear. Like the rest of the world, I have watched her navigate the last few years in astonishment."

Adams then recalled Markle's ascent into public life, including falling for Harry in 2016 and relocating to the United Kingdom the following year. "She fell in love, moved to a new country, became a household name across the entire globe and began the difficult work of trying to find her place in a family dynamic that can at best be described as complicated and at worst, seemingly archaic and toxic," he continued. "It sickened me to read the endless racist, slanderous, clickbaiting vitriol spewed in her direction from all manner of media across the UK and the world but I also knew that Meghan was stronger than people realized or understood and they would regret underestimating her."

He went added that the arrival of the couple's 22-month-old son, Archie: "And then they welcomed Archie. And on any sort of decent planet that would be a time to stop sharpening the knives and let these two people enjoy the magical early months and years of starting a family. But we don’t live on that planet and instead the hunt continued."

He also addressed Meghan's pregnancy with her second child, following her miscarriage in 2020. "It’s OBSCENE that the Royal Family, who’s newest member is currently GROWING INSIDE OF HER, is promoting and amplifying accusations of 'bullying' against a woman who herself was basically forced to flea the UK in order protect her family and her own mental health," Adams explained, going on to criticize Buckingham Palace further.

"IMO, this newest chapter and it’s timing is just another stunning example of the shamelessness of a institution that has outlived its relevance, is way overdrawn on credibility and apparently bankrupt of decency," Adams added, concluding his scathing thread by saying, "Find someone else to admonish, berate and torment. My friend Meghan is way out of your league."

Markle, whose interview with Oprah about her royal exit is just days away, also received the support of Suits executive producer Jon Cowan. "It's also possible the Duchess of Sussex is a good person thrust into an unimaginable world. Having spent 3 years working with her in her pre-Duchess days, I saw a warm, kind, caring person. I know nothing of her current situation but she gets the benefit of the doubt in my book," he tweeted on March 4.