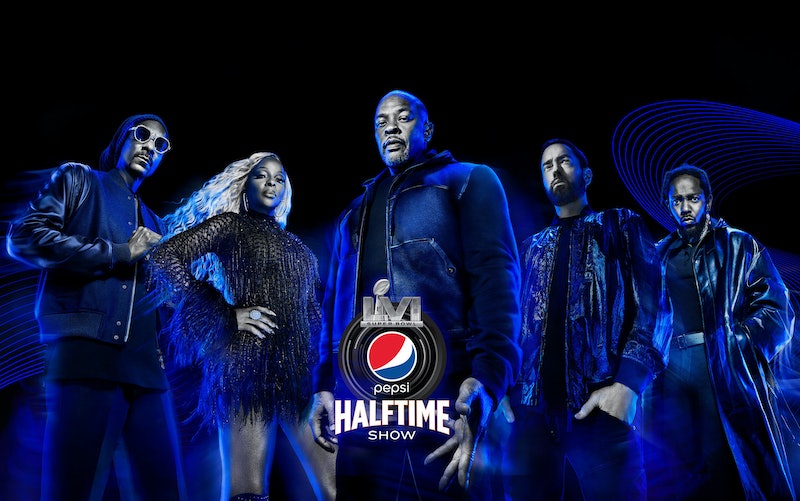 The all-star lineup for the next Super Bowl Halftime Show is set. The NFL, Pepsi, and Roc Nation just announced that the 2022 performers will be Dr. Dre, Eminem, Kendrick Lamar, Mary J. Blige, and Snoop Dogg, but what they’ll perform separately and together onstage on Feb. 13 at SoFi Stadium in California is still unknown. As some of the biggest heavy hitters in hip-hop and R&B, they have recorded hundreds of songs, won 43 Grammys, and unleashed 22 No. 1 Billboard albums, so all five artists have plenty of songs to choose from.

The Super Bowl Halftime Show — which is the most-watched music event in the world with roughly 90 million to 120 million viewers tuning in every year — typically runs about 12 minutes and artists usually perform fewer than 10 songs. It’s common for even the most successful smashes to only run a minute or so in length before the next track kicks in.

With this many massive stars on the field, what songs will they play? Below is our dream setlist, including surprise guests, for what just might be their biggest performance of their careers.

What Songs Should Dr. Dre Perform At Super Bowl LVI?

As the oldest artist of the group at 56 years old, Dre has a discography full of hit singles and historically important recordings, but quite a bit of the music he made earlier in his career likely isn’t appropriate for a family-friendly televised event. The rapper and producer will likely stick with the radio-friendly tunes as opposed to ones like “F*ck tha Police.”

Dre has recorded and released smashes with both Snoop and Eminem, and chances are he performs both songs. The media mogul and Snoop could go right into “Nuthin’ but a ‘G’ Thang” or possibly “F*ck wit Dre Day (And Everybody’s Celebratin’),” though just the name of that one probably makes it a no-go for the NFL. Eminem and Dre might duet on “I Need a Doctor,” one of the latter act’s more recent singles. While Skyler Grey probably won’t be included to provide her vocals on the hook, Mary J. Blige is right there and could do them justice.

What Songs Should Eminem Perform At Super Bowl LVI?

It’s likely that 48-year-old Eminem will command the spotlight for the longest come game day because he claims the most successful catalog of the bunch.

On his own, Eminem might rap “The Real Slim Shady,” “Without Me,” or maybe “Not Afraid,” all of which were massive and are signature tracks. He could bring out Dre for “Crack a Bottle,” another No. 1 for the rappers, and he may recruit Blige for either of the songs he originally recorded with Rihanna: “Love the Way You Lie” or “The Monster.” Since Rihanna has publicly stated she isn’t interested in the Super Bowl, it’s difficult to imagine her making a surprise appearance. His Oscar-winning track “Lose Yourself” would make for a fantastic closer, and millions at home and in the stadium would surely be rapping and singing along.

What Songs Should Kendrick Lamar Perform At Super Bowl LVI?

As the youngest artist of the group at 34 years old, Kendrick Lamar is a critical favorite, but he only has a handful of tracks that appear to fit the bill for a stage as big as this. His singles “Alright,” “i,” and “Humble” might be featured, but perhaps only small snippets of each. He’d have to edit some of the lyrics, but they’re all important and beloved tunes. He could also include his Oscar-nominated hit “All the Stars,” which was featured in Black Panther, and perhaps Blige will also sing SZA’s lines, potentially for a tribute to the late Chadwick Boseman.

MJB could very well sing alongside almost all of the other performers on tracks that feature vocalists, but she’ll definitely lead the charge with some of her own best compositions. The R&B powerhouse could belt soulful cuts like “Be Without You,” “No More Drama,” and “Not Gon’ Cry,” and it would be a real mistake to leave out the No. 1 giant that was “Family Affair.”

What Songs Should Snoop Dogg Perform At Super Bowl LVI?

In addition to the songs he may perform with Dre, Snoop has his own tracks that the enormous audience would love to hear. With a career spanning decades, tracks like “Gin and Juice,” “Still a G Thang,” and even “Drop It Like It's Hot” with Pharrell (though the producer probably won’t be there) could all be included in the setlist as well.

The Super Bowl LVI Halftime Show will air Feb. 13, 2022, on NBC and Telemundo. The game and music event will also stream live on Peacock.