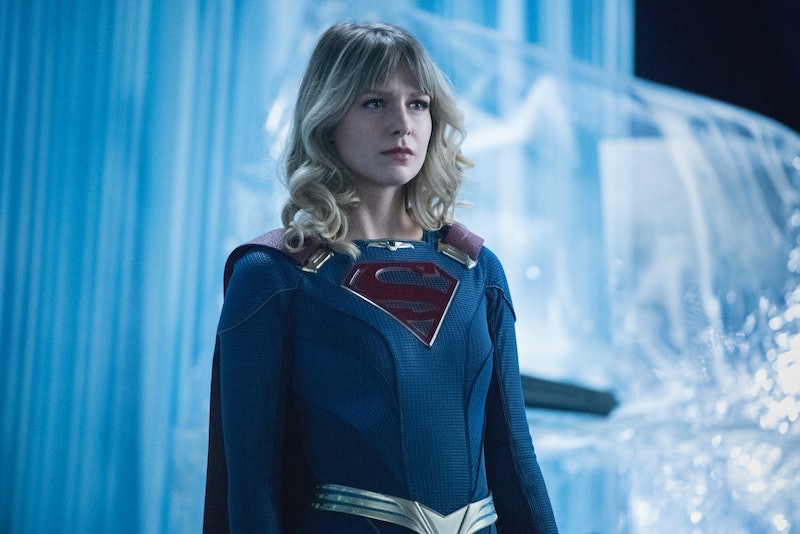 Supergirl could be facing her most formidable enemies to date in the show’s final season. In the past, Kara Danvers (Melissa Benoist) has fought everyone from powerful aliens and metahumans to human villains like Lex Luthor. But in Season 6, she may just have to face all three — and come to terms with her own role as hero.

When we last saw Kara and her team, they were working with Lena Luthor (Katie McGrath) to take down her brother Lex (Jon Cryer) and the crime organization Leviathan, secretly led by an ancient alien Goddess of Technology named Gamemnae (Cara Buono). Leviathan planned on controlling the world’s population by trapping everyone in a virtual utopia, but Supergirl snapped everyone out of it by giving a speech about the importance of both pain and joy. While Dreamer (Nicole Maines), M’gann (Sharon Leal), J’onn (David Harewood), and Alex (Chyler Leigh) fought off the remaining Leviathan agents, Brainy (Jesse Rath) seemingly sacrificed himself to shrink down and bottle up Leviathan’s ship. By the end of the season, Leviathan seemed to be defeated, but Gamemnae was still very much alive. She finally shed her human form and turned into a terrifying robot creature, while Lex stole the bottled up ship and handed it off to his mother, telling her to “get to work.”

Gamemnae and Lex will remain major villains at the start of Supergirl Season 6, as Kara and her Superfriends figure out how to neutralize Gamemnae and deal with whatever Lex is tinkering on now. There will also be a new villain arriving in National City; rumors suggest that it could be a magic-based enemy, as the casting call listed the character as a “powerful alien witch” named “Rosemary.” ScreenRant surmises that “Rosemary” could really be a stand-in name for Amparo Cardenas, aka La Dama, a terrifying entity who succeeded in killing off half the Justice League in one comic book run.

While it’s not yet confirmed who “Rosemary” is, the Supergirl showrunners told Entertainment Weekly that Kara is ultimately battling a variety of forces in the final season. “Kara is going to really put her life on the line to save her friends and humanity," co-showrunner Jessica Queller said. "She's going to face her mortality in a way we've never done on the show. ... It's life or death stakes for Kara, and it's very introspective.”

Queller added that Kara doesn’t just fight otherworldly villains in Season 6; a big part of her journey is also about confronting important social topics. Last season, Supergirl explored the dangers of technology, while Season 6 focuses more on the evils of corruption and oppression. "The theme that we really decided to focus on this year is about power, and the abuse of power, and the limits of powers, and from without and within,” Queller said. “So including not just our bad guys, which is very easy, but in terms of our heroes making decisions [because] their power is almost limitless. How [do] they decide where the line is?"

Co-showrunner Robert Rovner added that they were inspired by both the Black Lives Matter movement and people feeling “disempowered” by the pandemic. He said that for their final season, they wanted to focus on uplifting viewers and showing “what our heroes could do to help set an example.”

In the end, Kara’s biggest battle may be a personal one. “The more Kara matures, the more she's grappled with her power and what it means to carry the powers that she has on Earth and her identity as either an alien or human, or where she belongs,” star Melissa Benoist told Entertainment Weekly. “This season is going to be more of a self-exploration, looking in the mirror and [contemplating] what her power means because it's almost limitless and it makes her so strong on Earth. Where does she draw the line? How does she reconcile that with her humanity?”