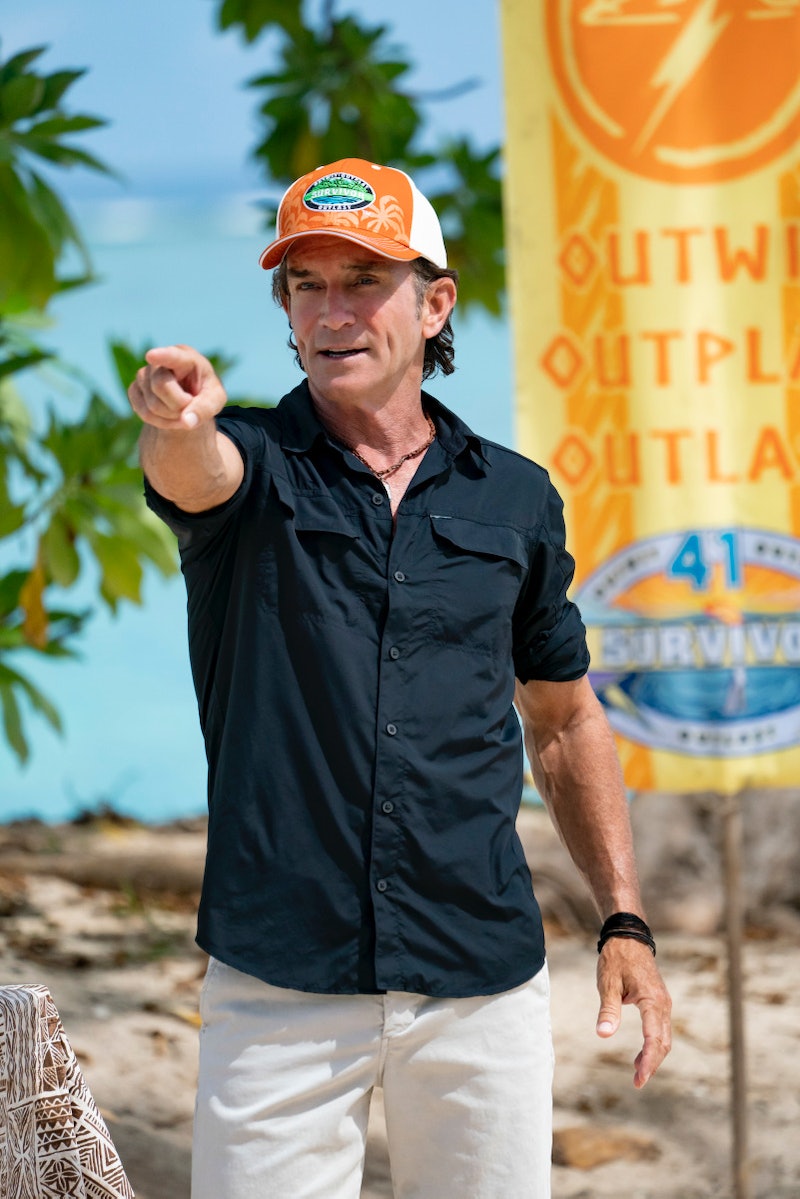 From different show themes to cast members, the long-standing reality competition series Survivor has seen its fair share of change in its 40-season run. And for Season 41, which premiered Sept. 22, the TV show has exposed even more surprises. Prior to its debut, fans were told that it would be simply titled Survivor 41, without a theme in place, and would proceed with a more diverse cast, shorter gameplay duration, and the option of viewer game interactivity. But there’s one more thing about Survivor that’s also gotten the boot: Jeff Probst’s catchphrase, “Come on in, guys.”

During the first episode of the 41st season, Probst asked the Survivor contestants for their advice on whether he should keep the familiar greeting or not. In the show’s 20-year history, the popular host has uttered the words “Come on in, guys” to welcome players. But, in what appeared to be a progressive move, he questioned whether using the word “guys” would be the right thing to say in a world learning about various gender identities outside of male and female. Some Survivor cast members, like Evvie Jagoda, were fine with the phrase, whereas others such as Ricard Foye, who is a gay man, requested for Jeff to change it. The phrase has since been amended to “Come on in,” but fans have had their own unabashed opinions and made sure to state them on social media.

Why Has Probst Chosen To Change His Familiar Catchphrase Now?

Survivor 41’s new cast is not only visibly diverse, but everyone has unique career backgrounds and there’s a vast range of ages. (The youngest contestant is 20 years old and the oldest 52.) There are also individuals in the group who are a part of the LGBTQ+ community, like Jagoda and Foye. The show is making good on CBS’ plan for more inclusivity in its reality shows, and perhaps doing away with the phrase “Come on in, guys” is Probst’s way to lean in with the network’s changes.

“For 20 years, I have used one phrase to call people in for challenges: ‘Come on in, guys.’ Love saying it. It’s part of the show,” Probst began the discussion. He then added, “I, too, want to be of the moment,” before asking the contestants if saying the word “guys” was still politically correct or if it was time to “retire that word.” Once Probst made the decision to change “Come on in, guys” to “Come on in” during the group’s first immunity challenge, he told the cast — and the world — that he was “glad that was the last time” he would ever say “Come on in, guys.”

When asked his opinion about the word “guys,” Jagoda responded, “I personally think guys is OK.” She stated “Come on in, guys” was a “signature expression” and for her, as a queer woman, she doesn’t feel excluded by the use of the phrase. The rest of the cast didn’t have a problem with keeping “guys,” either.

As for viewers, there have been many on social media who have voiced their disapproval of Probst’s final conclusion. One person wrote on Twitter, “one of the players asked jeff probst to change ‘come on in guys to ‘come on in’ after 40 seasons... ppl are INSUFFERABLE [crying face emoji].” Another fan tweeted, “I cannot believe that @survivorcbs has gone all PC over something as iconic as ‘come on in guys.’ Be careful tho @JeffProbst, being too PC is dull. Nobody wants to watch dull. #Survivor41.”

A number of Survivor watchers seemed to think that the omission of “guys” was the wrong move, with one questioning the benefits of “going woke.” One tweeted, “Probst doesn’t listen to the fans. If he did there’d still be a theme song and ‘come on in guys.’ You can still be fresh while maintaining certain traditions that helped to build your loyal fanbase. Going woke and consistently ignoring the majority of fans won’t bode well.”

When asked by Probst what he felt, Foye revealed that he “fully agreed” that the use of “guys” should have been dropped completely or changed to something else. He initially was fine with the idea of keeping Probst’s trademark expression, but then asked to have the word omitted from the host’s term. Foye said, “The reality is, Survivor has changed over the last 21 years, and those changes have allowed all of us, all of these brown people, Black people, Asian people, so many queer people to be here simultaneously.” Probst praised Foye for his “courage” to speak his mind on the internationally liked game series.

There are also viewers, even some who have stuck with the show since its first season, who are fine with “Come on in.” For example, one tweeted, “Watched since S 1 E 1 and ‘come on in’ works for me @JeffProbst.” Some alternatively proposed their own twist to the phrase. “@Jeff Probst here me out... come on in... y’all,” wrote one Twitter user. Another tweeted, “I agree @JeffProbst should either say Come on in everyone or come on in people but i like come on in everyone. I agree it feels weird with just come on in.”

The change may have proved controversial to many fans, but CBS hasn’t taken a public stance on the issue. (The network has not yet responded to Bustle’s request for comment.) For now, it looks like “Come on in” is here to stay. When the decision was made during the episode, Probst took ownership by turning to viewers and challenging them to tweet their grievances to him.

Sure enough, they did, even though he added, “I’ll probably never read it anyway.” Ever since the episode aired, scores of people have taken to Survivor’s official Instagram account to write, “Come on in, guys,” in the comments and the tweets have also pile up. There’s even a poll that showed a result of 89% of people believing Probst should have kept his original saying for Season 41.

It’s clear that the changed catchphrase is sorely missed by a number of Survivor followers, but it looks as though Probst has embraced change and has no plans to revert back to his famous gendered motto.

More like this
'Survivor' Host Jeff Probst's Salary Per Season After 22 Years Is The Real Winner
By Hugh McIntyre
‘RHOSLC’ Star Jen Shah’s Arrest & Legal Drama, Explained
By Brad Witter and Jake Viswanath
How To Apply For 'Survivor' & Tips On How To Get Cast
By Meg Walters
Everything To Know About 'RHONJ' Season 13
By Brad Witter and Jake Viswanath
Get Even More From Bustle — Sign Up For The Newsletter