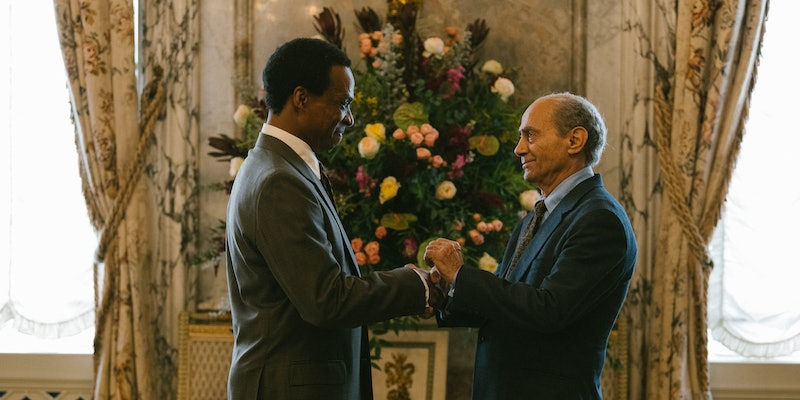 Over the years, Netflix’s The Crown has made many once little-known facts about the royal family common knowledge. In the recently-released Season 5, one of those facts is about a man named Sydney Johnson, who the show uses to connect the Windsors and Mohamed Al-Fayed — the businessman whose son, Dodi Fayed, dated Princess Diana after her divorce from Prince Charles.

In Episode 3, the show introduces Al-Fayed as a young man living in Egypt, and traces his rise to the top of the business world. Along the way, he meets a very interesting man: Johnson, the onetime personal valet to the Duke of Windsor (also known as the onetime King Edward VIII). Al-Fayed, in the hopes of becoming a British gentleman, takes Johnson on as his own valet. For years, Johnson instructs Al-Fayed on the finer points of British culture, helping him become one of the most influential businessmen in the country. Eventually, Johnson’s life comes full circle when Al-Fayed agrees to finance a restoration of Villa Windsor, where Johnson once waited on the Duke.

You’d be forgiven for thinking that the whole story sounds too neat to be true, but it did really happen that way, more or less. Below, learn more about Sydney Johnson and his relationship to both the Duke of Windsor and Mohamed Al-Fayed.

Johnson met the Duke of Windsor in the Bahamas...

As explained on The Crown, the Duke of Windsor took Johnson on as his personal valet while he was serving as the governor of the Bahamas from 1940 until 1945. (Johnson was hired on his 16th birthday, per The New York Times.) Johnson went on to serve the former king and his wife in France for decades.

Johnson attended to the Duke of Windsor’s every need at his mansion in Paris’ Bois du Boulogne park, and also accompanied him on his travels. Johnson was even there to care for him after his passing, as he told the New York Times in 1989: “I remember they came to embalm him and I picked a suit for him to wear. But they said, no, he'll be wearing nothing. ‘As he comes, so he goes.’ That's what they said.” According to a Vanity Fair report, it’s not known for sure if the Duke of Windsor left Sydney anything in his will, but a profile in Jet magazine from 1959 stated that the former monarch gifted Johnson a decent sized property in the Bahamas.

Regardless, Johnson stayed on with Wallis Simpson after the Duke’s death — until she dismissed him a year later.

...and met Al-Fayed at the Ritz

Following his dismissal, Johnson found employment at the Ritz hotel in Paris, where, as seen in The Crown Season 5, Episode 3, he met Al-Fayed. From there, Al-Fayed took him on as his valet.

An Anglophile desperate to fit into English society, in real life as in the episode, Al-Fayed valued Johnson for his knowledge of the inner workings of British high society. But much like Johnson’s relationship with the Duke of Windsor, the two men eventually formed a real bond.

Johnson and Al-Fayed worked together to restore Villa Windsor.

As in The Crown episode, Johnson really had a hand in renovating the Duke of Windsor’s former mansion, with the help of Al-Fayed’s wallet and connections. Al-Fayed told The New York Times, via Today, that it couldn’t have been done without Johnson’ knowledge. “Sidney is a dictionary. He’s a very cultured man. He got all these things out of boxes and safes and storage rooms, and he knows their history.”

Per the AP, Johnson felt “on top of the world” when they reopened the home, newly renamed “Villa Windsor.” He reportedly said, “The restoration is so authentic I expect to see the duchess stepping down the staircase asking, ‘How do I look?’” (Naturally, he was wearing his old red and gold uniform for the occasion.) Sadly, Al-Fayed never managed to fully open the villa as a museum or tourist attraction, so fans of The Crown can’t see the fruits of Johnson’s labor.

Johnson died in 1990, at the age of 69. In his obituary, Al-Fayed is quoted as saying, “[Johnson] was truly a gentlemen’s gentleman. We shall miss him very much.”