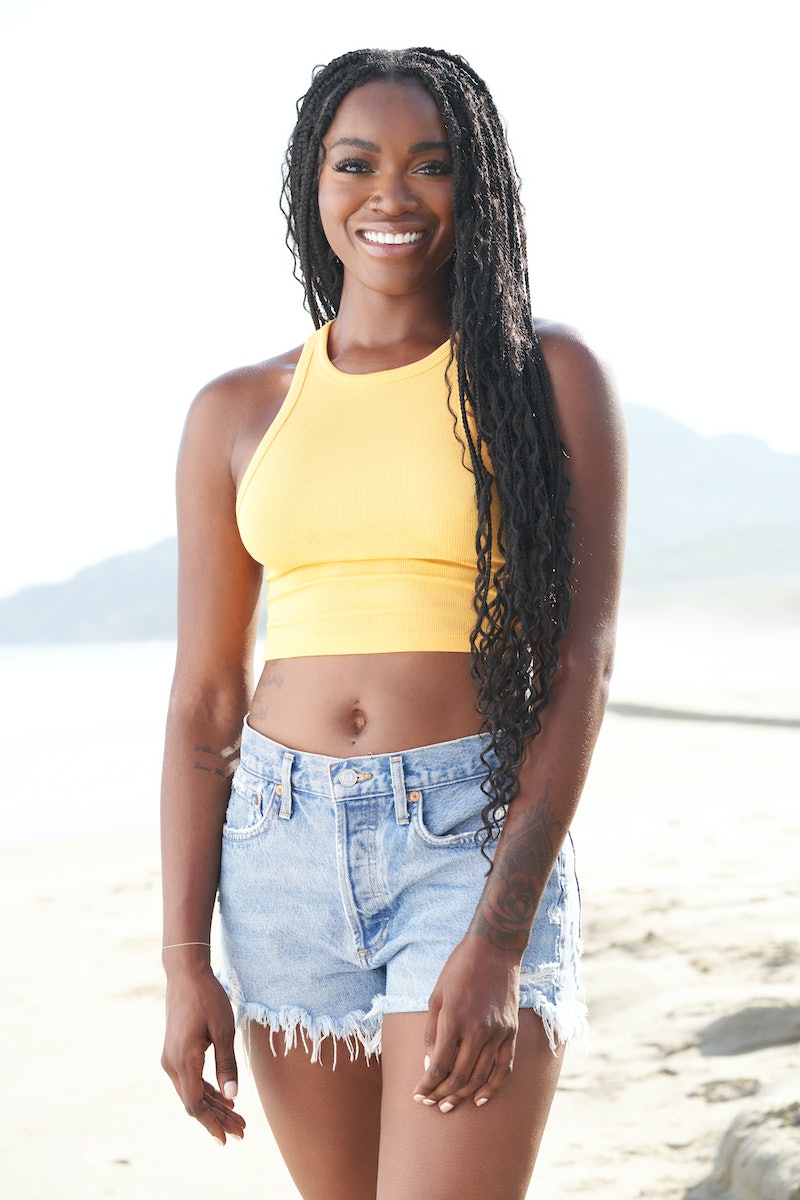 Bachelor in Paradise is returning to give Bachelor and Bachelorette alums a second chance at love — or, in Tahzjuan Hawkins’ case, a third. The 27-year-old competed on Colton Underwood’s season of The Bachelor but was eliminated on night one, even after she came in with the great pickup line of, “I hope I'm the Tahz-juan for you.” She then appeared on BiP in 2019 and had a memorably awkward date with John Paul Jones. Now, she’s headed back to the beach in hopes that the third time’s the charm.

Here’s everything you need to remember about Tahzjuan ahead of BiP’s Season 7 premiere.

According to her LinkedIn page, Tahzjuan was working as a business development associate at Lyft during Colton’s season of The Bachelor. She started at the company from May 2018 and stayed there until June 2021, when she became an associate broker at the tech-powered real estate company Real.

She studied organizational communication at Metropolitan State University in Denver and graduated in 2015. In 2018, she also posted on Instagram that she would graduate with a master’s degree in business administration from Colorado State University in 2020, but since the post was deleted (and the degree is not listed on her LinkedIn) it’s unclear if that’s still in progress.

Tahzjuan doesn’t use social media often, but on Instagram she has a few posts about her mom, her love of empowering women, and her summer travels. She posts more frequently on Twitter, where she recently talked about Twilight, how rough dating in Colorado is, and her support for the Bachelor Diversity Campaign.

What Happened to Tahzjuan On Colton’s Bachelor Season

As one of the first women eliminated, Tahzjuan didn’t have a chance to make much of an impression on The Bachelor. Her chat with Colton was rudely interrupted by Catherine Agro, who at that point had already made three other baffling attempts to steal him away from the other contestants. (Tahzjuan handled the situation with grace, even though she clearly looked confused by Catherine’s tactlessness.

Tahzjuan later attended The Women Tell All special, where she joined in on Katie and Caelynn’s argument about whether or not Cassie and Caelynn said they wanted to be on The Bachelorette if they didn’t get Colton.

She Supported Colton Coming Out

After Colton came out as gay, Tahzjuan told The Sun that she was “happy for him” because “it’s important for people to live their lives the way they authentically want to.” She added that she didn’t “feel misled” by Colton, and he doesn’t “owe anyone an apology for being who he is.”

“I commend you @Colton for speaking your truth,” Tahzjuan tweeted on April 14. “In the world we live in today, show kindness it’s free.”

Her Awkward Date with JPJ

When Tahzjuan arrived on BiP Season 6, she was given a date card and immediately chose John Paul Jones. It was both of their first one-on-one dates on the show, and it quickly became one of the most unintentionally comedic moments of the season.

JPJ kicked it off by saying “cheers to my first Tahz-juan on one,” and then laughed endlessly at his own pun. He then asked what the “epitomology” of her name was and laughed some more about how the base root of their names was “John.” They both seemed very nervous, and then JPJ decided to eat the display date food, even after Tahzjuan warned him that he was definitely not supposed to touch it. “It looked like chicken. It might’ve not been chicken,” Tahzjuan told the cameras. “I don’t know what the hell it was.”

JPJ coughed and nearly vomited, but Tahzjuan looked on the bright side. “If he vomits on me, we’re taking a shower together,” she told the cameras. They ended up salsa dancing, getting really sweaty, and yelling and kissing in the ocean. Even though Tahzjuan admitted that JPJ was the strangest guy she’d ever met, she said she “love[s] strange.” It ultimately didn’t work out between them — JPJ was still very attached to Tayshia Adams at the time — but perhaps Tahzjuan will find someone just as weird on Bachelor in Paradise Season 7.

This article was originally published on Jan. 7, 2019