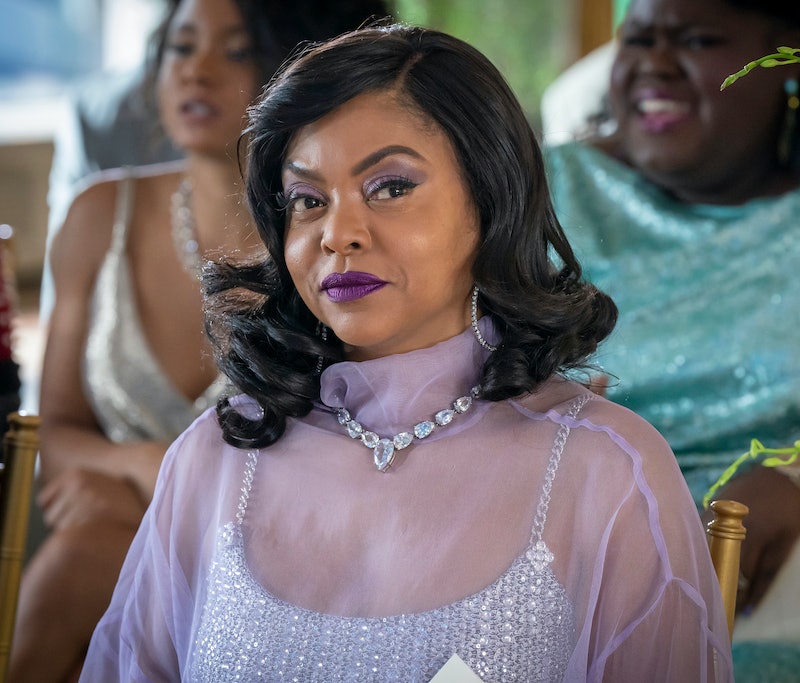 Empire's Cookie Lyon may be a strong spitfire who holds nothing back, but the woman that plays her likes to hold some things close to her chest. Taraji P. Henson's dating timeline proves that she keeps her love life private. The actor and entrepreneur's dating history includes famous celebrities such as Common and Lamar Odom, but she never said a word about their relationships when they were actually together.

However, when Taraji is truly in love, she's not afraid to let the world know it. Most recently, she was engaged to footballer Kelvin Hayden in 2018 and showed off her stunning ring after his surprise proposal. Unfortunately, their relationship is no longer. Henson revealed that they split in October 2020, meaning that the star is currently single. Here's everything fans should know about Henson's relationship history and if she's currently seeing anyone.

As Henson's career began to take off, she started dating actor Hill Harper sometime in 2002. The couple kept quiet about their romance, but in a 2016 interview on the Unsung Hollywood podcast, Harper said they were in a "wonderful" relationship for nearly two years. He attributed the breakup to his own commitment issues but had no regrets about being with Henson. "Just because you're in a healthy, great relationship that ends doesn't mean it wasn't successful or it was a failure," he said. "Not all relationships are meant to end in marriage."

According to reports, Henson sparked a connection with rapper and actor Common in October 2005. However, neither of them would admit to their romance for a long time. In 2011, the Empire star finally confirmed their relationship to talk show host Wendy Williams while dismissing other rumors about her love life. "Okay, I'll tell you the truth, Common and I did date," she said. Referencing gossip about her dating rapper Drake, singer Tyrese, and actor Terrence Howard, Henson firmly stated that she never did.

Henson dated famous basketball player Lamar Odom in 2009. However, their relationship wasn't known until nearly ten years later, when Odom said in an Uncensored interview that he met and hit it off with Henson at an HBO party. "I really, really, really started liking her," he said in October 2019. The actor soon motivated Odom to become a better player. "I used to carry her picture on the road with me," he shared. "Nobody know that. She gave me inspiration — a black woman working like that, who's just as good at her craft as I'm good at my craft."

Odom took responsibility for the breakup, admitting that he left Henson for Khloé Kardashian, who he famously married after dating for less than two weeks. "Things ended with Taraji because of me being an immature punk," he said. "I didn't know how to tell her that I was falling in love with another woman called Khloé Kardashian." He went on to call his relationship with Henson the "most significant relationship" he's had with a Black woman. "I just wish I would have done things different with her," he added. "She was a little older than me, but I learned a lot from her."

In December 2017, Henson confirmed that she was dating former NFL player Kelvin Hayden during an interview on Essence's Yes, Girl! podcast. At this point, the couple had already been together for two years. "Finally, it has happened to me!" she said. "You know, I'm not the type to blast my personal business, but I think that it's important for people to know that I'm happy. I'm very, very happy. We've been together for two years."

On May 14, 2018, Henson announced that she got engaged to Hayden over Mother's Day weekend — and received double the gifts. The Hidden Figures star shared the news by posting a photo of her engagement ring alongside a plate of desserts that read "congratulations." "I said yes y’all!!!" she wrote. "He started with the Cartier love bracelet BUT that was my #Mothersday gift and then he dropped to his knee and I almost passed out!!! #sheisofficiallyoffthemarket and she is sooooooooooooo HAPPY!!!!!"

In an interview with Entertainment Tonight that same month, Henson described the proposal and said she was totally caught off-guard by the surprise. "He takes me where we had our first date, I didn't put that together," she admitted. "I didn't put it together until we went into the party room after we ate, and I saw a violinist, 'cause he was trying to say it was his friend's birthday... And as I'm putting the dots together, I turn around, he's on his knee, and then the river of tears just started and my lashes ended up on the floor."

Almost two years after getting engaged, Henson was full speed ahead on wedding planning until COVID-19 hit. In an April interview with ET, the actor revealed that her ceremony was originally scheduled to take place in June 2020 before confirming that "everything was halted" due to the pandemic. She was particularly concerned about choosing a date without knowing if it would be safe to gather with loved ones by then. "It's a mess," she said.

At that point, Henson and Hayden were leaning toward doing an outdoor celebration for their closest family members. "It's probably going to be a backyard wedding," she said. "It would break my mother's heart, [after] all these years, she had been wanting to see me get married and it's got to be virtually?"

Instead of going forward with their backyard nuptials, Henson announced in October that their engagement had ended. "I haven't said it yet, but it didn't work out," she revealed in an interview with The Breakfast Club. Although she didn't confirm when they split, the actor said that they went to couples therapy before calling it quits. "I tried. I was like, 'Therapy. Let's do the therapy thing.' But if you're both not on the same page with that, then you feel like you're taking it on yourself," she said. "... When one person is taking on the weight of the entire relationship, it's never going to work."

As she always does, Henson has kept any new developments about her love life to herself since her engagement ended. So even if she is dating around right now, fans probably won't know until she and her significant other are ready to share that with the world.

More like this
Dixie D’Amelio & Noah Beck “Love Each Other” Despite Breakup Rumors
By Julia Emmanuele, Jordyn Tilchen and Grace Wehniainen
Hailey Bieber Just Responded To *That* Viral Met Gala Moment
By Radhika Menon and Sam Ramsden
'MAFS UK' Changed The Rules After Matt & Whitney Cheated On Their Partners
By Catharina Cheung
Molly-Mae Hague & Tommy Fury Celebrate Pregnancy Reveal In The Sweetest Way
By Sophie McEvoy and Sam Ramsden
Get Even More From Bustle — Sign Up For The Newsletter