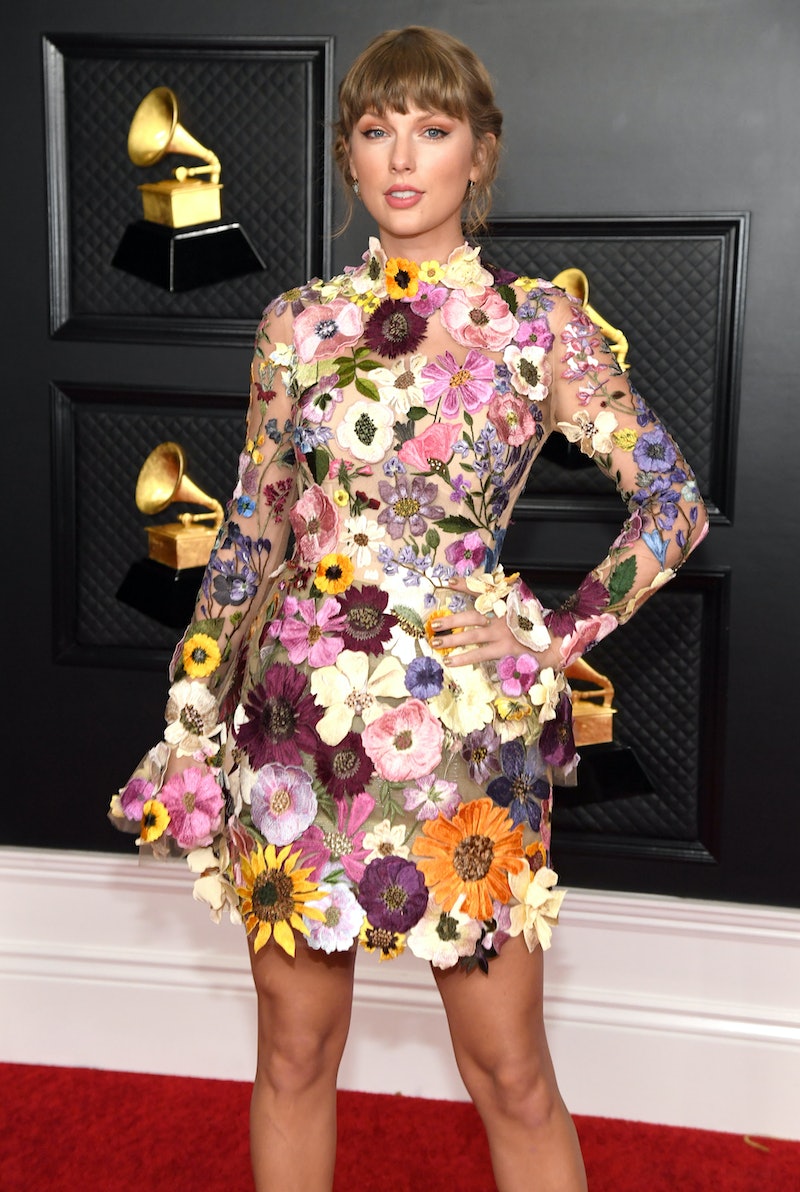 Taylor Swift made Grammys history on Sunday night after winning Album of the Year for Folklore, marking her third win in the category and becoming the first woman to win the award three times. In her acceptance speech, Swift thanked her boyfriend Joe Alwyn. And it wasn’t her only celeb shoutout. The singer also thanked her friends Blake Lively and Ryan Reynolds as well as their three children, James, Inez, and Betty, whose names she wrote into Folklore.

In a rare shoutout, Swift almost immediately thanked Alwyn, calling him “the first person I play every single song that I write.” This makes sense, considering that he co-wrote two songs from Folklore, “Exile” and “Betty,” under the pseudonym William Bowery. “I had the best time writing songs with you in quarantine,” she said. Swift went on to call Lively and Reynolds the “second and third people” she plays her music. Considering she revealed the name of their third child with the song “Betty” and inserted the names of their older kids into the song, the parents have definitely earned that privilege.

Of course, Swift also thanked her other Folklore collaborators Aaron Dessner and Jack Antonoff, who accepted the award with her onstage and performed a dazzling medley with her earlier in the ceremony. She also mentioned her “Exile” duet partner, Bon Iver, saying, “I’m so excited to meet you someday.” The album was created in quarantine, with Swift and her collaborators working remotely from their homes, and was released with only a day’s notice in July 2020.

Following the big show, Swift shared a photo on Instagram of her posing with her collaborators and paid tribute to her fans in the caption. “The fans are the reason we’re floating tonight, and we’ll never forget it,” she wrote. As captured by E! News, Alwyn subtly showed his support by liking the post, showing he was there in spirit even though he wasn’t by her side at the Grammys.

Swift first took home the Grammy for Album of the Year in 2010, winning for her sophomore album Fearless. She became the first woman to win the category twice when she won for 1989 in 2016, giving a memorable speech that responded to Kanye West’s controversial lyric about Swift in his song “Famous” and making a point about women owning their success. But when she won for the third time and broke the record again in 2021, Swift mainly focused on the people who made her albums so popular to begin with: the Swifties.

“Mostly, we just want to thank the fans,” she concluded. “You guys met us in this imaginary world that we created and we can't tell you how honored we are, forever, by this. Thank you so much, and thank you to the Recording Academy. We will never forget that you did this for us. Thank you so much.”