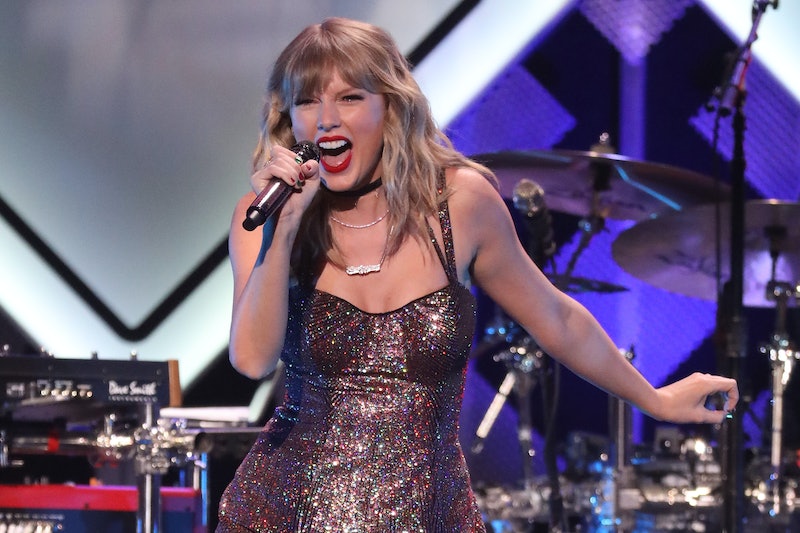 Well, the Swifties have cracked the case once again. After months of fan speculation about the identity of one of her new co-writers, Taylor Swift revealed that boyfriend Joe Alwyn helped her write two Folklore songs under the pseudonym William Bowery. While speaking about the track "Exile" during her Disney+ concert film Folklore: The Long Pond Studio Sessions, the singer explained to collaborators Jack Antonoff and Aaron Dessner that Bowery couldn't join them to share his thoughts on the track — because he's not a real person.

"So, William Bowery is Joe [Alwyn]... as we know," Swift revealed. She went on to explain that the actor, who is secretly a talented piano player, actually came up with the piano riff of and some of the first verse. "Joe plays piano beautifully and he's always just playing and making things up and kind of creating things," she said, adding that he wrote the piano part and sang Bon Iver's lines while they wrote the song. "I was entranced, and asked if we could keep writing that one," she said.

In addition to contributing the melody and some lyrics, Alwyn inspired the singer to make the song a duet. "It was pretty obvious it should be a duet because he's got such a low voice," Swift explained. "It sounded really good sung down there, in that register." (The song's bridge, meanwhile, was written by Bon Iver (aka Justin Vernon) after he was asked to sing on the track.)

"Exile" wasn't Alwyn's only contribution to Swift's seventh studio album; later in the film, the singer explained that she wrote fan-favorite track "Betty" with her boyfriend after hearing him sing the "entire, fully-formed chorus" in another room. "It was a step that we would never have taken because why would we have ever written a song together?" she said. "This was the first time we had a conversation where I came in and I was like, 'Hey, this could be really weird and we could hate this, so could we just, because we're in quarantine and there’s nothing else going on, could we just try to see what it’s like if we write this song together?'"

The couple's relationship survived the test — and it also inspired Swift to write "Betty" from the point of view of James, the two-timing boy at the center of her "teenage love triangle" trilogy of songs. "He was singing the chorus of it, and I thought it sounded really good from a masculine perspective. And I really liked that it seemed to be an apology," Swift continued, explaining that she's written many songs from the female perspective about yearning for an apology.

Swift herself has written songs under a pseudonym in the past, most famously helping ex Calvin Harris write "This Is What You Came For" as Nils Sjoberg. "Amazing lyric writer and she smashed it as usual," the producer confirmed in a since-deleted tweet back in 2016. In a recent conversation with Paul McCartney for Rolling Stone, Swift revealed that she created the identity by combining "two of the most popular names of Swedish males."

While she noted that it was fun to keep her contributions hidden for a bit, Swift explained that the real reason she likes to sometimes use a pen name is to create without the pressure of having her own identity attached to the project. "I think, when a pseudonym comes in is when you still have a love for making the work and you don't want the work to become overshadowed by this thing that's been built around you, based on what people know about you. And that's when it's really fun to create fake names and write under them," she explained. Clearly, Alwyn — excuse us, William Bowery — feels the same way.

More like this
Taylor Swift Wants To Direct A Movie Next — But You Might Have To Wait
By Radhika Menon
Everything To Know About Taylor Swift’s 10th Studio Album, 'Midnights'
By Grace Wehniainen and Jake Viswanath
Kanye West Apologizes To Kim K "For Any Stress I Have Caused" In Rare Interview
By Jake Viswanath
Adam Levine Denies Having An Affair — But Admits He “Crossed The Line”
By Jake Viswanath and Radhika Menon
Get Even More From Bustle — Sign Up For The Newsletter