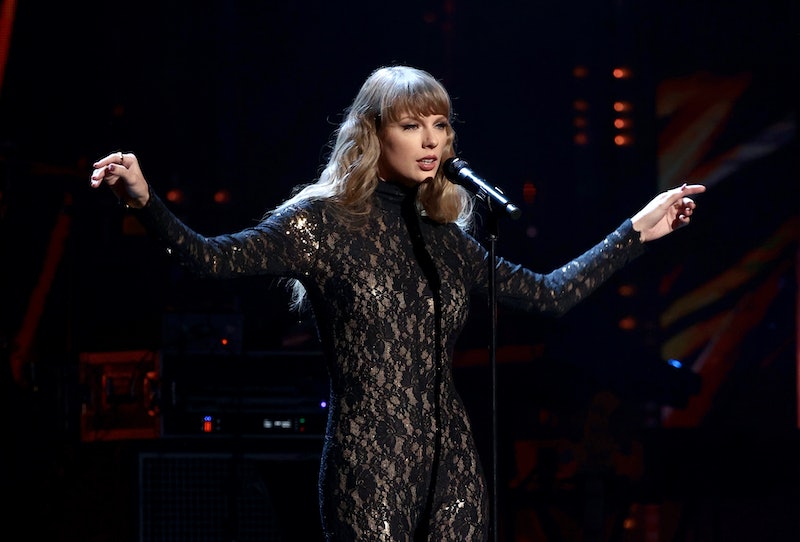 While she’s been busy getting an honorary degree and talking “All Too Well” at the Tribeca Film Festival, Taylor Swift hasn’t said much about new music since releasing Red (Taylor’s Version) in 2021 — causing fans speculate when she’ll unleash her next re-recorded album. It turns out that she had another trick up her sleeve. On March 22, Swift previewed a song titled “Carolina” in the Where the Crawdads Sing trailer. The film, featuring Normal People star Daisy Edgar-Jones, is based on Delia Owens’ 2018 novel and produced by Reese Witherspoon via her production company Hello Sunshine.

Swift shared the trailer on Instagram at the time, explaining in her caption that she read Where the Crawdads Sing years ago and “got absolutely lost” in its world. “As soon as I heard there was a film in the works starring the incredible @daisyedgarjones and produced by the brilliant @reesewitherspoon, I knew I wanted to be a part of it from the musical side,” she said. Swift penned “Carolina” for the film and asked her Folklore and Evermore collaborator Aaron Dessner to produce it. “I wanted to create something haunting and ethereal to match this mesmerizing story,” she wrote.

Swift concluded her post by teasing that fans will be able to hear the full song “soon” without giving an exact release date, which is classic cryptic Swift. WTCS will hit theaters on July 15 — but you won’t need to wait that long to hear the inevitably beautiful track that is “Carolina.” as Swift announced on her Instagram story June 23, the song will finally be released at midnight June 24.

There was no other text in the image besides the song’s title, release time, and a pre-save link — but of course, that’s all we need. Unlike most perceived Swiftie Easter eggs, this message was cherry lips, crystal skies-clear.

The announcement comes days after the film’s Instagram posted a grid of images, whose captions each included one bold letter; when you read all those letters in order, they read “THIS THURSDAY,” as many fans pointed out. As promised, Swift dropped the song on June 24, and shared a personal anecdote about the tune.

“About a year & half ago I wrote a song about the story of a girl who always lived on the outside, looking in,” Swift tweeted at midnight on June 24. “Figuratively & literally. The juxtaposition of her loneliness & independence. Her curiosity & fear all tangled up. Her persisting gentleness & the world’s betrayal of it.”

She added: “I wrote this one alone in the middle of the night and then @AaronDessner and I meticulously worked on a sound that we felt would be authentic to the moment when this story takes place. I made a wish that one day you would hear it. ‘Carolina’ is out now.”

So, what is the movie itself about? Where The Crawdads Sing follows two timelines that gradually intertwine. Jones plays Kya, a young girl who is abandoned by her parents and forced to grow up alone on the marshes of North Carolina in the 1950s and ’60s. The second story focuses on an investigation into the murder of local North Carolina hero Chase Andrews, played by Harris Dickinson. In September 2018, just a month after its release, Witherspoon selected Crawdads for her Hello Sunshine Book Club, making her an obvious contender to adapt it into a film. The novel went on to become Amazon’s best-selling book of 2019, selling more print copies than any other adult fiction or non-fiction title.

This isn’t the first time that Swift has lent her musical talents to the big screen. Prior to Crawdads, Swift collaborated with legendary composer Andrew Lloyd Webber to write “Beautiful Ghosts” for the 2019 film adaptation of his musical Cats, in which she also starred. The singer also wrote two tracks for The Hunger Games — “Safe and Sound” and “Eyes Open” — in 2012, and teamed up with Zayn on “I Don’t Wanna Live Forever” for Fifty Shades Darker in 2016.

Swift has not been nominated at the Oscars with these soundtrack songs, although “Safe and Sound” won the Grammy for Best Song Written for Visual Media. “Beautiful Ghosts” and “I Don’t Wanna Live Forever” also received nods in the category. Perhaps “Carolina” will change the tides and earn Swift her first Best Original Song Oscar nomination.

More like this
Taylor Swift Calls Dwayne Johnson "The Man" After Revealing New "Taylor's Version" Song
By Jake Viswanath
Taylor Swift & Her Mom Clap Back Against The “Shake It Off” Plagiarism Lawsuit
By Jake Viswanath
Christina Perri Had No Idea Her 'Twilight' Song Is On YouTube's Top 100 Chart
By Radhika Menon
Lady Gaga Will Star In 'Joker: Folie À Deux' With Joaquin Phoenix
By Jake Viswanath
Get Even More From Bustle — Sign Up For The Newsletter

This article was originally published on March 22, 2022