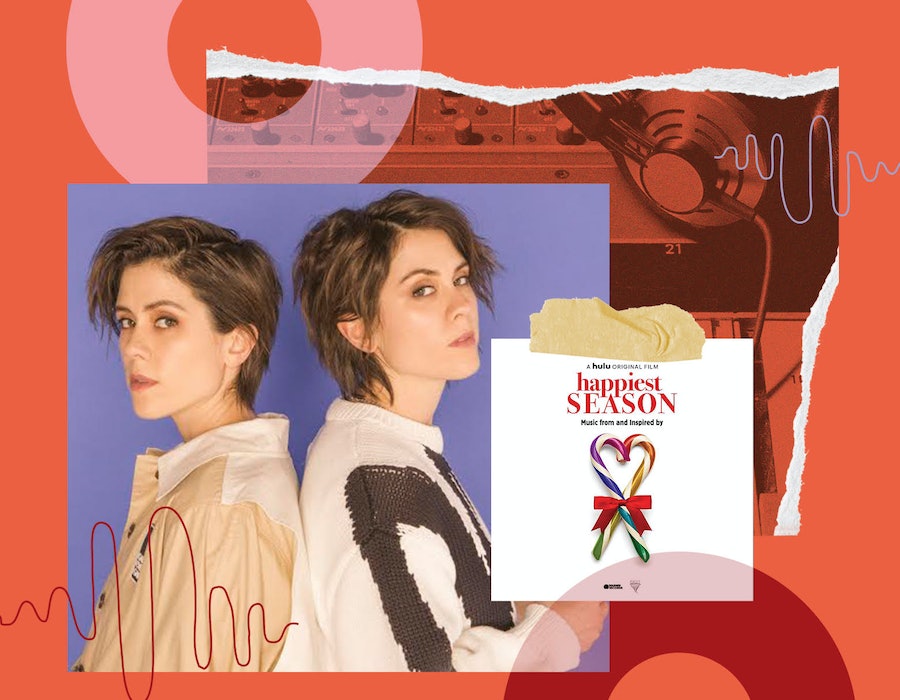 “Mariah Carey’s 'All I Want for Christmas Is You.'"

That’s what the indie pop duo Tegan and Sara were told by director Clea DuVall to emulate when creating a holiday song for her upcoming rom-com Happiest Season. “We were like, ‘Okay, calm down!’” Tegan Quin tells Bustle with a laugh. “We’re not going to write the biggest Christmas song of all time, but we’ll certainly try and we’ll put lots of sleigh bells on it.”

While the twin sisters didn't belt à la Mariah, they did cook up the certified holiday bop “Make You Mine This Season." Written with collaborator Alex Hope over Zoom during quarantine, the song is filled with what Quin calls “quintessential ‘90s pop Christmas pizzazz.” It also perfectly encapsulates the spirit of the film, which tells the story of a woman bringing her girlfriend home for the holidays with her family — who don’t know that she’s gay. Having the soundtrack embody the queer ethos of Hulu's Happiest Season was essential to DuVall, who made sure that the Justin Tranter-produced soundtrack featured LGBTQ+ artists or songwriters on every recording. (Both Tegan and Sara are queer as well.)

But creating a catchy holiday track was just one of many things on the agenda for the pair in 2020, who were forced to stay hyper-productive while in quarantine. The Quin sisters had a busy first few months working on a series of not-yet-announced graphic novels, launching a T-shirt subscription club, and pitching a TV series directed by DuVall based on their bestselling memoir High School. Soon though, the grim reality of what it meant both financially and creatively to not be touring, despite putting out their latest record Hey, I’m Just Like You in 2019, set in. “It’s been very exciting and fruitful but then also super depressing and weird,” she explains. “We didn’t tour last year or the year before because we were writing a book and a record. To not tour this year and to likely not tour next year, that’s a pretty big hit for us, so I can’t even imagine what it’s like for smaller artists who are struggling.”

Still the pair still soldiered on, finding strength and solace in their work — and those efforts are now paying off. IMDb TV just signed on to partner with them un adapting High School. (They joke about Billie Eilish playing them.) Plus their memoir, the show’s source material, was just published in paperback this month. Then of course, there's their ballad for Happiest Season. It may not be Mariah, but it's a queer, Christmas anthem that will make people feel seen for years to come.

Below, Quin discusses A Charlie Brown Christmas, her love of Daft Punk, and the inadvertently religious music she made in her teen years.

Do you have a favorite holiday song?

Obviously there’s tons of great Christmas stuff all over the map, but on December 1, I start listening to Frank Sinatra’s Christmas songs. I also love the soundtrack from A Charlie Brown Christmas.

But I feel like what really affected me as a young person was this series called A Very Special Christmas [where] Bruce Springsteen, U2, Tom Petty, Boyz II Men, and everybody cover[ed] Christmas songs. We used to listen to it nonstop.

Did you have a favorite in the series?

On The Song That Defines Her Adolescent Years

Is there a specific song that stands out to you from being a teen?

It’s so hard because every year was so different. Grade 10 was really all about Green Day and I think of “When I Come Around.” But then when I think of Grade 12, I think about how, as weird and alternative as our friends were, we loved Daft Punk.

What else was in that mix?

We were obsessed with [Daft Punk’s] “Around the World” and “Set You Free” by N-Trance.

There’s a lot of range there.

We were odd. We were obsessed with Nirvana and Green Day and Courtney Love but then we’d also get drunk and dance to straight-up pop.

What’s the strangest way a song of yours came to be?

Our latest record Hey, I’m Just Like You is a wacky story. I mean, not that many bands have found treasure troves of demos they wrote when they were 15, taken six months of their lives to re-construct them and modernize them, in some ways Frankenstein-ing them together.

For example, “I'll Be Back Someday” is a combination of two songs we wrote when we were 15, one called “Johnny My Friend” and the other “Gregory Lies.” It’s not a typical Tegan and Sara record in any way. Finding the songs, recording the songs, making the record, even the fact that it’s now linked to COVID, like we put the record out and won’t get to tour it. We’ll forever look at this era as a strange moment in our catalog.

Was there anything that was too weird for even that album?

Honestly, there was some very strange stuff. The band that we had in high school had songs called “Condemnation” and “Jesus Comes Quickly.” It was really strange and always oddly rooted in religious iconography. Just weird because we’re atheists and we’re not religious and I don’t remember being consumed by religion, and yet when we started writing songs, we were constantly talking about those things for some reason.

I’m sad we’ll never get to hear “Condemnation,” a Tegan and Sara classic.

This interview has been condensed and edited.

More like this
Ramin Djawadi Is Living Out His Dreams
By Rebecca Long
Even If She Tried, Beth Ditto Couldn’t Stay Away From Music
By Ivana Rihter
Everything You Need To Remember Before ‘The Handmaid’s Tale’ Season 5
By Grace Wehniainen
Khloé Kardashian Debuts Baby Boy On 'The Kardashians' Season 2 Premiere
By Jake Viswanath
Get Even More From Bustle — Sign Up For The Newsletter