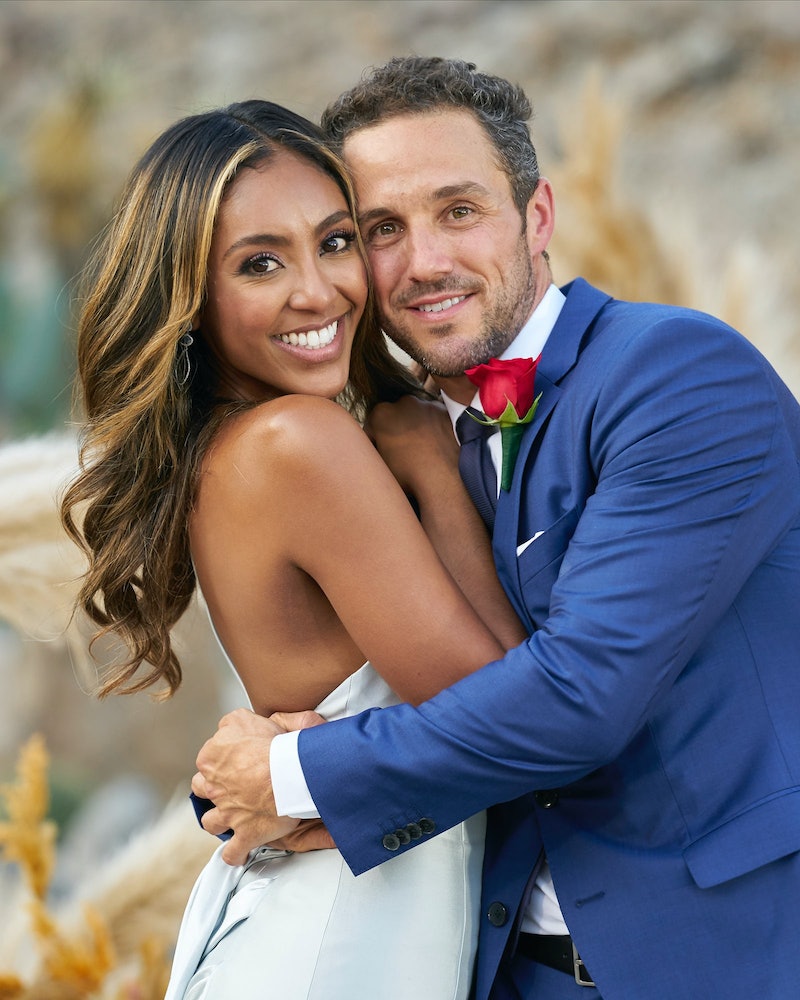 If you're looking for a Tayshia Adams and Zac Clark relationship update, you've come to the right place. In a recent interview with Marie Claire, the former Bachelorette revealed when fans of the reality TV franchise can expect the couple to tie the knot. The short answer? She has no idea.

"We're dating right now while being engaged," the 30-year-old told the magazine, adding that she's frequently asked if they are still together and has to reassure fans that she's "not at all thinking about [ending the relationship]." But as strong and committed as they are, Adams confirmed that she and Clark are in no rush to get married — regardless of how much she wants to throw on a white dress and meet him at the end of the aisle.

"At first, Zac was the person to be like, 'We could get married next week.' And I was like, 'Slow your roll.' I'd love to date a year. And now I'm like, 'You want to … maybe next month?' And he's like, 'Tayshia, slow your roll.' We're back and forth," she revealed. "But there's no timeline. It's definitely going to happen. I just don't know when."

Tayshia and Zac's decision to wait to get married makes total sense, especially because of the expedited dating process on the show. "It's not a normal relationship," she admitted, referring to the way they met, their unorthodox engagement, and their living arrangements thereafter. She and Clark have only been engaged for about five months, had to hide their romance from the public for two, and are now bicoastal.

These days, Tayshia has her own place in Los Angeles for "peace of mind." "This is not my first rodeo," she told Marie Claire, nodding to her divorce from her ex-husband, which left her no choice but to move back in with her parents. And while people might consider the newly engaged pair's living arrangements to be a red flag, Tayshia wants their supporters to know that things are going extraordinarily well.

"I feel like I'm obsessed with him at this point, which is weird to say because I don't like to sound so cliché, but he's very much everything I need," she said. "I have an issue with trust. He's teaching me to get that back." Clark, for his part, has found a partner who truly believes in him and cheers for his success. "At one point, nobody trusted him as an addict," Tayshia revealed, referencing her fiancé's past struggles with substance use. "I took a chance on him. We're very complementary to one another."