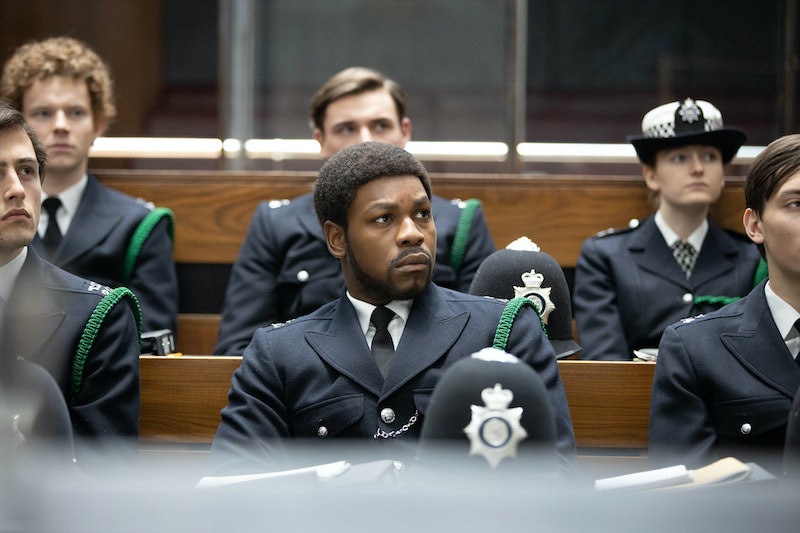 Red, White and Blue is the third instalment in the BBC's Small Axe series – a set of five films by award-winning director Steve McQueen, documenting critical, and often untold moments in history for Black people in the UK. Following the first two releases, Mangrove and Lovers Rock, the latest film is due to premiere this Sunday – and we're counting down the days. Ahead of it's release, the Red, White and Blue trailer has just dropped, giving a glimpse of what we can expect.

The Red, White and Blue trailer opens with a scene set around the family table of Leroy Logan – played by John Boyega – a young forensic scientist who joined the police in 1983 after seeing his father assaulted by police officers. The family, heads bowed in prayer, ask for Logan to be kept safe during his police training, and that they be granted "the wisdom to accept his decision".

In the trailer, we see Logan tell his father that he hopes to change the police force from within: "At least this way Dad, I can change things," he says. To which his father responds: "Get out of my house!" We watch as Logan faces anger and disappointment from his family and community; alongside the institutionalised racism that compelled him to join the police force.

"Leroy’s entire life to date is a fascinating one," McQueen explains in the BBC statement. "I was particularly taken with the relationship between him and his father, and wanted to explore that further. We had wonderful long difficult chats with Leroy throughout the writing process to discuss his choices, and try to unearth the reasons behind them. This parallel with his journey of becoming a policeman was a tension I wanted to write."

Logan went on to co-found the National Black Police Association, dedicating 30 years of his career to the Met, for which he was awarded an MBE in 2000. His autobiography, Closing Ranks: My Life As A Cop was published in September this year – although in it, he writes that "The Met is still institutionally racist."

The role is cast well, given that John Boyega is no stranger to standing up to racism himself. Earlier this year, the 28-year-old – who is a part of Disney’s Star Wars franchise – became a leading voice in the UK Black Lives Matter protests in London. In an emotional speech addressing the crowds in Hyde Park, he said, "I don’t know if I’m going to have a career after this," highlighting the potential cost of speaking out against racism.

"The time in history that we’re capturing is so specific, especially as a Black British individual," Boyega says in the BBC statement on Red, White and Blue. "It’s so close to my narrative as well. I wanted to be a part of a story that gave us an eye in terms of our history, because it’s not really a mainstream focus, and hasn’t been for a very, very long time."

Although the timing of the series feels particularly relevant now, Small Axe has actually been a long time in the making. "The seed of Small Axe was sown 11 years ago," Steve McQueen told the BBC. "Initially, I had conceived of it as a TV series, but I realised these stories had to stand alone as original films, yet at the same time be part of a collective. The anthology, anchored in the West Indian experience in London, is a celebration of all that that community has succeeded in achieving against the odds."