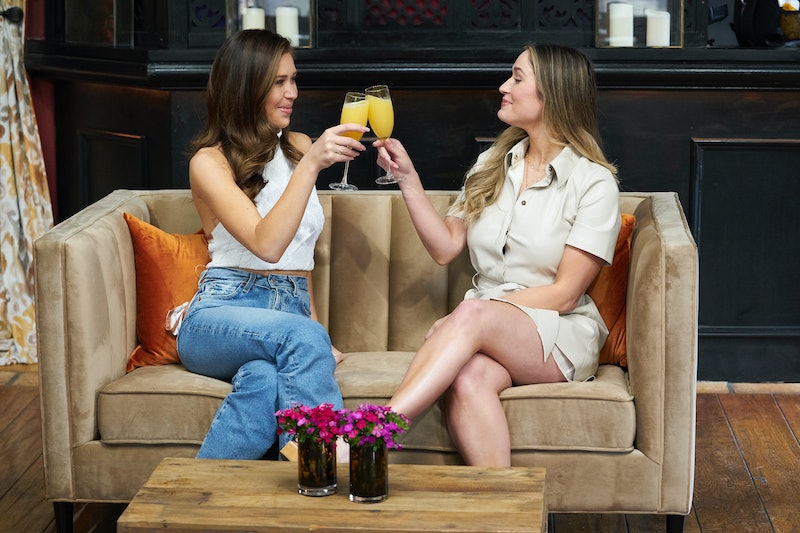 Bachelorettes Gabby Windey and Rachel Reccia didn’t waste time this season getting their 29 eligible men to bare all, pun intended. When the two were talking at home, Rachel asked Gabby, “How do we get them to show their six-pack abs when it’s raining?” The two came up with a solution: a pageant.

On the group date, Gabby told the men their plan to get to know their contestants deeper. “Naturally, we thought a pageant would be the best way,” Gabby told the men as they were handed two gift bags filled with Speedos. Aside from making the men strip to their printed undies and model them in front of everyone, the two women also interviewed each candidate and made them showcase their “talents” — all to win private time with the ladies in an exclusive afterparty. Questions included how an ex would describe them and which Hogwarts house they would pick. Talents involved doing the worm, mortgage consulting, and a jar of marinara sauce (more on that later).

While the season leads seemed to enjoy the showcase, Twitter wasn’t as impressed. “ah yes, the objectifying group date is right on schedule,” user petersgolfcart wrote. However, fans couldn’t look away from the talent competition.

Some users pointed out that a Speedo competition may not be the best way to get to know someone’s... personality.

Some questioned the need to censor the men in their Speedos. “No one is more employed right now than the black box,” user PattiMurin tweeted.

Twitter also spotted the misses in the “show’s” talent portion. Aside from doing some sort of group activity with beats and a basketball, one of the contestants, Chris, also decided to do an impromptu vocal performance. “Rachel to my east, Gabriella to my west,” he sang. “I don’t think producers liked his song,” one user posted after noticing the snarky “Tone Deaf” description the producers wrote.

The Internet also reacted to Meatball deciding to live up to his name and douse himself in spaghetti sauce. From a jar. One user asked, “i’m sorry WHO told meatball to do sauce shower!?” Rachel also cheekily noted in a confessional that she is Italian and doesn’t do sauce from the jar.

Someone even felt sorry for host Jesse Palmer, who probably wasn’t enjoying the show as much as the ladies.