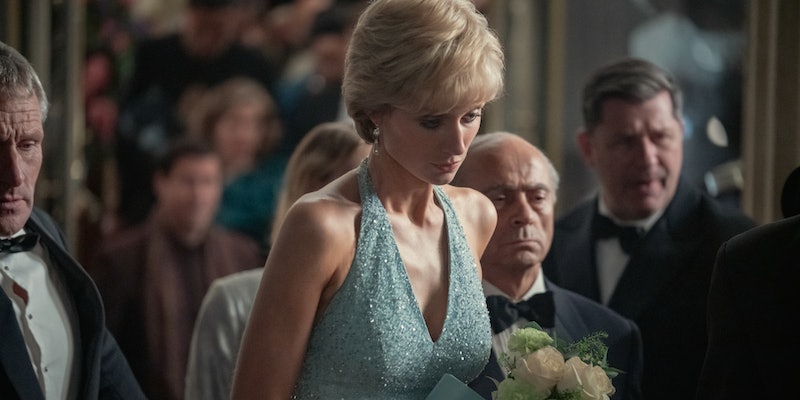 The Crown Season 5 signifies yet another new era for the Netflix historical drama, with a new Queen Elizabeth II at the helm. After exploring the stories of Lady Diana Spencer (Emma Corrin) and Margaret Thatcher (Gillian Anderson) in its turbulent fourth season, the series again recast its main roles to jump ahead to the ’90s. But following the news of Queen Elizabeth II’s death at 96 on Sept. 8, there are new elements to consider surrounding the rollout of The Crown Season 5. Here’s everything we know so far, including the premiere timeline.

Netflix’s Tudum event on Sept. 24 brought the unveiling of the premiere date of The Crown Season 5: Nov. 9. Leading up to the reveal, many had wondered if the death of Queen Elizabeth II may lead to a delay, but it seems the speculation didn’t come to pass. The season had been expected to arrive in the fall, like past seasons, and new star Imelda Staunton pinned down the release date to November 2022 in a video message that dropped during last year’s.

In Staunton’s message, she shared that they had “just begun filming Season 5.” Just weeks earlier, ET Canada had reported that Elizabeth Debicki and Dominic West, who are playing Princess Diana and Prince Charles, were spotted filming at Dunsfold Aerodrome in Surrey in South East England.

On Oct. 20, Netflix finally released The Crown Season 5 trailer — which describes the royal family “in genuine crisis.” It also teases a closer look at Princess Diana’s “revenge dress,” and her tell-all 1995 interview.

According to Netflix, Season 5 will see Diana “breaking with family protocol to publish a book that undermines public support for Charles and exposes the cracks in the House of Windsor.”

The Crown Season 5 is expected to center on the lives of the British royal family between the 1990s and early 2000s. As Cosmopolitan reports, one standout moment likely to be covered is the queen’s speech on the 40th anniversary of her succession in 1992, a year she famously described as her “annus horribilis.” The breakdown of several royal marriages are also expected to be heavily featured, including Prince Andrew’s separation from Sarah Ferguson, Princess Anne’s split from Captain Mark Phillips, and Prince Charles and Princess Diana’s 1996 divorce.

During Tudum, Netflix showed a clip that confirmed one of the expected Season 5 storylines: the Prince and Princess of Wales’ divorce. The footage shows the couple separately as the divorce announcement plays in voiceover. Then we hear news reports about the fallout, including coverage of their interviews and commentary on some “filthy” and “disgusting” tapes (likely the phone call between Charles and Camilla that leaked in 1992). The last words we’re left with are: “This is becoming all-out war.”

The publication of Diana’s controversial tell-all book, Diana: Her True Story, in 1992 will also presumably be included, and the footage suggests the explosive interview Princess Diana gave to Martin Bashir on BBC One’s Panorama is as well. (In the sit-down, she famously spoke about Prince Charles’ affair with Camilla Parker Bowles, saying, “There were three of us in the marriage.”) Speaking to The Sun, an insider claimed that The Crown’s creators plan on making Diana’s infamous Panorama tell-all “the keystone moment in series five.”

“To the writers, the stormy marriage between Charles and Di led up to her outpouring on Panorama, and the aftermath of that decision defined her final months,” the insider revealed, adding, “they are making a huge investment in that.” Prince William “[remains] deeply frustrated” with the possible Panorama narrative, according to The Telegraph. The Oct. 26 report comes months after Diana’s son publicly denounced the interview, describing it as “a false narrative,” which “needs to be addressed by the BBC and anyone else who has written, or intends to write, about these events.”

Despite the rumours, Netflix is yet to comment on the inclusion of this particular storyline. However, the Princess of Wales’ death, which tragically occurred in 1997, will be included, per RadioTimes. To help with the potentially difficult and controversial depiction of the royal’s final years, The Crown’s Peter Morgan had reportedly enlisted screenwriter and journalist, Jemima Khan, a close personal friend of Princess Diana, to contribute to the forthcoming season. Khan initially agreed, however, has since chosen to bow out, claiming in a statement to the Sunday Times on Nov. 6, that the “particular storyline would not necessarily be told as respectfully or compassionately as I had hoped.”

Khan has also requested that all her contributions “be removed from the series” and has also declined credit. The Crown’s spokesperson has responded, telling the Evening Standard that “Jemima Khan has been a friend, fan and a vocal public supporter of The Crown since season one.” They stated that while she was “part of a wide network of well-informed and varied sources” they added that Khan “has never been contracted as a writer on the series.”

As for other moments, series creator Peter Morgan has a methodical process in picking what to feature. “This is the part of the writing process that takes me the longest — working out what to leave and what to put in,” Morgan told The Hollywood Reporter. “I like to think that’s the magic ingredient and what defines The Crown.”

The research process takes Morgan and the writing team “at least nine months” before the actual script is written. “History, even recent history, is so reductive, and so many gems disappear into a black hole.” Morgan said he likes to highlight “surprises, the overlooked stories” alongside “iconic events” like weddings, elections, and assassinations.

For those hoping to see a dramatization of Prince Harry and Meghan Markle’s infamous exit from the royal family, Morgan confirmed that won’t be happening. “I know how my show is going to end — but that’s long before where we are now,” he told Entertainment Weekly. “Let’s wait 20 years and see what there is to say about Meghan Markle. I don’t know what there is to say about Meghan Markle at the moment. I wouldn’t know, and I wouldn’t presume.” The same rule may apply to the news of Queen Elizabeth II’s passing — for Morgan, the event may simply be too soon to dramatize.

The Crown’s cast will continue to evolve in Season 5. Those confirmed to be joining the series include Oscar-nominated actor Lesley Manville, who will replace Helena Bonham Carter as Princess Margaret. Additionally, Jonathan Pryce will take over the role of Prince Philip from Tobias Menzies. Meanwhile, RadioTimes reported on April 30 that Camilla Parker Bowles will be played by Olivia Williams (The Father), taking over from Oscar winner Emerald Fennell. “Charles and Camilla seem to have a very healthy sense of humor about what at times must be an unbearable predicament,” Williams told Tudum. “And that is the thing that I most want to show.”

Queen Elizabeth II, played by Academy Award-winner Olivia Colman in Seasons 3 and 4, will be portrayed by Imelda Staunton in the fifth season. Dominic West will play Prince Charles, taking over for Josh O’Connor. In an Oct. 14 interview with Tudum, West reiterated that The Crown was “not an imitation, [but] an evoking of a character.”

Meanwhile, Elizabeth Debicki will replace Emma Corrin as Princess Diana. In released photos, Debicki can be seen as Princess Diana when recreating the widely recognised “revenge dress” moment. The actor is pictured wearing a dress similar to that risqué off-the-shoulder Black chiffon dress the Princess of Wales wore to a Vanity Fair fundraiser for the Serpentine Gallery in Kensington Gardens in 1994. The actor is also pictured in a teaser image on a sofa with a letter on her lap, arms wrapped around her body and engagement ring firmly in the frame.

Debicki previously expressed her excitement about joining The Crown. “Princess Diana’s spirit, her words, and her actions live in the hearts of so many,” she said in a statement (via Town and Country). “It is my true privilege and honor to be joining this masterful series, which has had me absolutely hooked from Episode 1.”

In her interview with Tudum, the actor opened up about playing the princess and working with “the most visual content” of the real royals out of any season of The Crown so far. “In the ‘90s everything had started to be filmed and also it was the birth of the 24-hour news cycle so there's just this incredible amount of content that we have access to,” she explained. “Diana was the most photographed person in the world at that time. As an actor you open the portal and this huge tsunami of information comes at you. I happily swam around in it.”

On Jan. 11, Variety confirmed that Humayun Saeed will join the cast this season as Dr Hasnat Khan, a lung and heart surgeon that Diana was in a relationship with for two years prior to meeting Dodi Fayed in 1997, per Metro. Khan practiced medicine at London’s Royal Brompton Hospital, and in a 2004 statement said that he had “considered a life with Princess Diana”, but the constant hounding of the press would have made it “untenable”. In September 2021, Netflix announced that Fayed would be played by The Kite Runner’s Khalid Abdalla.

As well as plenty of other replacements to reflect the time shift, the show will also welcome a new character in the form of John Major, the British politician who succeeded Margaret Thatcher to lead England between 1990 and 1997. Taking on the role of Major is Jonny Lee Miller, who has previously starred in Trainspotting and Elementary. The news was confirmed via a tweet from The Crown’s official page.

According to The Sun, the Blairs have been cast, too. Gentleman Jack star Lydia Leonard is tipped to play Cherie Blair, while Bertie Carvel will step into Tony Blair’s shoes.

Another somewhat controversial new character entering the show is Prince Philip’s close friend and confidante Penny Knatchbull, also known as Lady Penny Brabourne. Knatchbull, who often joined Prince Philip at outdoor sports events, will be played by Californication actor Natascha McElhone. Sources told The Sun that this relationship “raised a few eyebrows” and “sparked quite a few whispers,” but the Duke of Edinburgh and Knatchbull always maintained they were “just friends.”

As Variety reported, the drama has finally cast its Prince William following a nationwide search. The young prince will be portrayed by newcomer Senan West, the real-life son of Dominic West, who plays Prince Charles in the Netflix hit. Senan will make his on-screen debut as Prince William in the final episode of the forthcoming fifth season.

On March 19, The Mail on Sunday reported that Philippine Leroy-Beaulieu — who plays Emily’s Parisian boss on Emily in Paris — would also be joining the cast. The role, she said, “was a very small thing but it was a lot of fun and I was so, so happy to be in it. Every episode is like a little film on its own. It's crazily well written.” Leroy-Beaulieu didn’t say who she would be playing, but the paper said she would portray Monique Ritz: “the widow of Charles Ritz, who sold the famous hotel in Paris to [Dodi Fayed’s father], Mohamed Al Fayed.”

Casting for the billionaire Mohamed al-Fayed was announced on June 22 by Variety. Amir El-Masry, whose credits include Star Wars Episode IX: The Rise of Skywalker and The Night Manager will portray the former Harrods owner. Mohamed al-Fayed was also the father of Dodi, who Princess Diana was in a relationship with.

Will The Crown Season 5 Be The Last?

The Crown’s fifth season had previously been confirmed to be the show’s last. However, Morgan later announced the Netflix drama will end with Season 6. “As we started to discuss the storylines for Series 5, it soon became clear that in order to do justice to the richness and complexity of the story we should go back to the original plan and do six seasons,” he said in a statement. “To be clear, Series 6 will not bring us any closer to the present-day — it will simply enable us to cover the same period in greater detail.”

This article was originally published on November 7, 2020