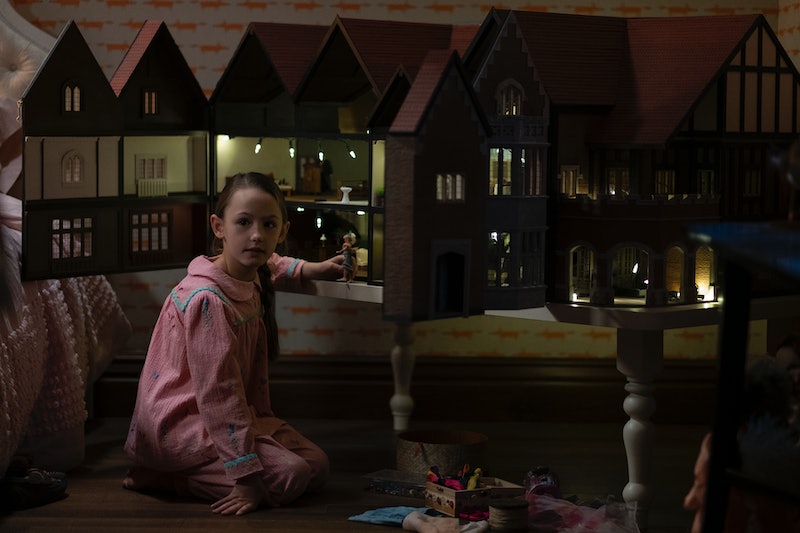 Spoilers ahead for The Haunting of Bly Manor. Everything within Bly Manor serves an important purpose — that includes something even as trivial-seeming as a child's dollhouse. In fact, according to series creator Mike Flanagan, Flora's dollhouse has a surprising Harry Potter connection that adds an extra layer of intrigue to the Bly Manor replica. Because much like how Harry, Ron, and Hermione used the magical map to track everyone's whereabouts at Hogwarts, young Flora is able to do the same with the ghosts lurking throughout the hallways of the manor.

“The dollhouse is like our Marauder’s Map for this season,” Flanagan told Entertainment Weekly in a recent interview. “It was an idea that was actually born of Rebecca Klingel, one of our writers who also casually came up with the concept of the Red Room in season 1. She just kind of shows up every season and drops an idea like this on the table, drops the microphone, and leaves the room.”

Flanagan went on to explain how the dollhouse serves as “a tracking system for the ghosts," allowing Flora and the viewers to know where the undead will pop up at all times. That's a big reason why Flora is so protective over her dolls, as each one represents a specific person (or ghost) within the household. As for how the dolls get moved to their correct positions each day, though, that job begins and ends with the faceless little boy ghost Flora befriended. Once she creates the dolls, the boy arranges them in the proper location inside the dollhouse to reflect where they currently are within Bly Manor.

This arrangement comes in handy several times throughout the season to help the kids and Dani avoid any unwanted run-ins with ghosts, especially in regards to the equally mysterious and terrifying Lady of the Lake. It's not as easy to transport as a map you can simply fold up in your pocket, but it's definitely a useful tool to have when your house is being haunted by various spirits.

However, like with most things on this show, the dolls are meant to represent something much more complex and serve as part of the over-arching theme of the season. “In unhealthy relationships, we have a tendency to take people and turn them into these doll versions of themselves in our imaginations, something we can manipulate, collect, even trap, in Peter Quint’s case,” Flanagan explained. “That idea of ceasing to look at someone else as an equal and a person, and looking at them as a romantic prize or something to possess.”

Loving someone doesn't mean that you own them, though, sadly in some cases the two can often go hand-in-hand — a concept that Flanagan was eager to explore through the relationships of these characters. “We’d say in the room, which characters are truly capable of loving each other and which characters are only playing with dolls?” Flanagan added. “We have Hannah Gross and Owen, who are so capable of real love — and Dani and Jamie, of course. But you have Peter Quint, who just was never capable of loving a person, only of trying to play with them in the same way Flora plays with the dolls in her dollhouse."

More like this
Netflix Shut Down 'Bridgerton' S3 Rumours About A “Very Dark” Storyline
By Bustle
Rupert Grint Just Shared A *Major* Update About Ron Weasley’s Future
By El Hunt
The 'Freeridge' Cast Shared Their Hopes For A Potential Season 2
By Grace Wehniainen
You Might Want To Rewatch This Key 'On My Block' Scene To Understand 'Freeridge'
By Grace Wehniainen
Get Even More From Bustle — Sign Up For The Newsletter
From hair trends to relationship advice, our daily newsletter has everything you need to sound like a person who’s on TikTok, even if you aren’t.