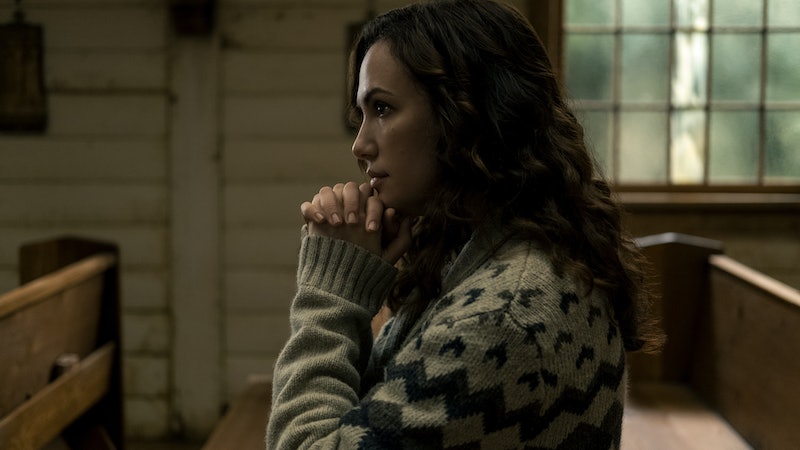 Spoilers ahead for Season 1 of Midnight Mass. Perhaps there was no other way for Midnight Mass to end than in flames. After Monsignor Pruitt brings an “Angel” back to Crockett Island and, believing it to be a messenger from God, spreads its “miracle” blood to the townsfolk, their situation grows more and more hopeless. His parishioners are healed and given the gift of immortality, but in the process become vampiric beings destined to forcefully convert anyone who crosses their paths. It’s a clear metaphor for the harm wrought by the strict ritualism and blind faith of Christianity, and yet Midnight Mass ultimately eschews pure nihilism in favor of something more hopeful: sure nearly everyone dies in the end, but there’s a sense that it’s going to be OK.

What makes the ending work is that the show never veers from the core of its story. This is a town that is not evil by nature, but rather was so eager for something to believe in, some sort of break in a string of bad luck, that they allowed a monster to corrupt their lives irrevocably. To co-opt a popular saying, they didn’t make good choices because they had no good choices.

Midnight Mass is empathetic about how and why we make the choices we make. By the end of the season, each of the characters’ arcs has paid off in a way that honors the path they chose. Desperate to redeem himself for killing a woman while driving drunk, Riley sacrifices himself to try to save the town (and, if Erin and Dr. Gunning were correct in their suspicions about Bev Keene’s plan, the world). The mayor and his wife, blinded by their devotion to a church they thought had “cured” their daughter, accept their fate and set off to find her to say goodbye. Erin wanted death to mean something and also sacrifices herself for the cause, allowing the Angel to suck her blood while she shreds its wings to prevent it from leaving the island. And Dr. Gunning rejects the Angel’s immortal blood in favor of a natural death, an act that shocks her father out of his stupor.

Even those who preached the “gospel” of the “Angel” the hardest — Monsignor Pruitt and Bev — find their endings diverging due to their individual choices. Pruitt comes to understand that even though he truly believed he was saving his parish, his church and faith have been corrupted by a force he doesn’t actually stand by. Instead, he turns his back on his mission, burns down the church so the converted have nowhere to hide from the sun, and goes to bury Dr. Gunning — who is revealed to be his daughter — as a small act of grace. Bev refuses to renounce the Angel, firm in her adherence to her beliefs no matter the cruelty it invokes, and fights almost to the last moment, seeking to bury herself in the ground just before she bursts into flames.

Of course ultimately, whether these people acknowledge their own bad choices or not, they each meet the same fate. Aside from Leeza and Warren, every single person gets infected and winds up stranded on the island, combusting together as the sun rises. It’s bleak, hearing the hymn they’re singing hushed out all at once. But it’s also peaceful. Leeza and Warren’s fate is uncertain; as Warren said, he doesn’t think his little canoe can make it the 30 miles to the mainland. But their story holds a bit of hope: in the final line of the series, Leeza says she can’t feel her legs again, suggesting that any trace of the Angel’s blood died along with the Angel itself.

There’s hope left for those left on the island, too. In their final moments, they recognize that they’ve been swept up in something evil beyond their control. As Annie Flynn tells Bev, God loved them all the same in the end. And the fact that they choose to come together to try to stop the spread of the Angel’s evil — even when they were too far down the road to save themselves — isn’t lost.