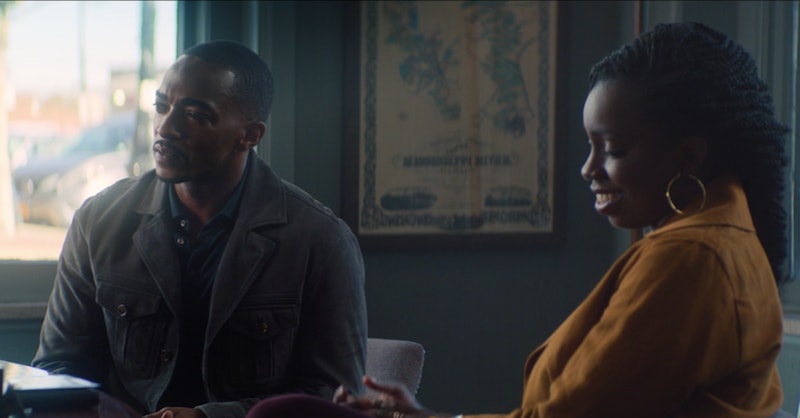 The Falcon and The Winter Soldier may not be as rife with Marvel Easter eggs as WandaVision, but the new Disney+ show definitely opens up questions about the wider Marvel Cinematic Universe (MCU). Specifically, we learn in the premiere episode that the Avengers were apparently never getting paid to, you know, save the universe from certain destruction.

This plot point is brought up during The Falcon and The Winter Soldier’s bank scene. After Sam Wilson (Anthony Mackie) learns that his sister Sarah (Adepero Oduye) is planning to sell their family’s boat to save her fishing business, he accompanies her to the bank to request a loan. The loan agent giddily recognizes Sam and takes a selfie with The Falcon, but he’s unwilling to even consider approving the loan. “I’ve always wondered, how do you guys [the Avengers] make a living?” he asks Sam. “Is there some kind of fund for heroes? Or did Stark [aka Iron Man] pay you when he was around?”

“It doesn’t really work like that,” Sam informs him. “There’s a tremendous amount of goodwill and because of that, people are inclined to help.”

Not only did this minor detail prompt a stream of humorous memes, it also opened up a whole host of amusing new questions within the MCU.

I can’t be alone in assuming that this entire time — a span of about 10 years within the MCU — billionaire and philanthropist Tony Stark was paying for everything for the Avengers. He first built them a skyscraper and later an entire compound (with really tastefully decorated rooms, based on Wanda Maximoff’s), and most of the team’s expensive gear. It was simple to accept that everything else was paid for by him, too.

Given everything that happened in the MCU, one possible explanation could’ve been that Nick Fury and S.H.I.E.L.D., when it still existed, gave the team a salary. We could have also been told that after that organization ended, Tony Stark stepped in to bankroll everyone, but stopped after the team fractured in Captain America: Civil War.

But according to Sam, it just genuinely sounds like no one has ever paid the Avengers in anything but exposure and donations. Tony Stark owned an entire armory of flying and talking robots. He could’ve at least given them a basic income! Demand more from our fictional billionaires!

Is the government paying the Avengers?

It seems like some of the Avengers are getting paid by the government, but as far as we know it’s only the ones in traditional military jobs. We know Rhodey is a Lieutenant Colonel, so he’s on their payroll. Sam is also currently working with the government, but at the start of the show he has no income to show for it as he was dusted in The Blip for the last five years.

Furthermore, the implication of the Sokovia Accords from Civil War is that any superhero who signs it operates at the behest of a United Nations panel, but it was never clarified if that meant the UN paid them for each job. Until now, we’ve never had to consider these details! Are the Sokovia Accords just a fancy way of getting unpaid interns? Possibly!

OK, are the Avengers broke?

There is a moment in Age of Ultron in which the original Captain America, Steve Rogers, complains that he can’t afford to buy a flat in Brooklyn. At the time it seemed like a humorous quip, but now it reads like a cry for help.

The question of whether the Avengers are broke, and if they even have jobs, really depends on the Avenger. Spider-Man is still in high school, and Ant-Man canonically runs a security company (and yes, pulls off criminal heists) with his friends. Doctor Strange could probably magic up anything he wants, and I like to imagine the new bespectacled Hulk gives conference talks. But it seems like the rest of them just genuinely don’t have any source of income. How did Thor afford his gaming console in Avengers: Endgame? How did Vision have money to buy a plot of land for Wanda in WandaVision? We may never know.

Are the Avengers paid in the comics?

Per Nerdist, it often was Tony Stark who bankrolled the team in the comics. But needing to pick up a job is also integral to several of the Avenger’s storylines. Peter Parker is almost always portrayed as a struggling photographer, for example.

Yes, the latter half of the conversation does suggest that the reason the agent doesn’t approve the loan is because he’s suspicious of Sam and Sarah. He questions them so much about their financials that Sarah cuts in, “I don’t get what you’re going for here. Are you trying to help us, or indict us?”

Lenders turning down loans for Black customers is a very real issue, and it is admirable that The Falcon and The Winter Soldier is attempting to explore how even a superhero like Sam would experience racial discrimination. But it feels like there could’ve been a neater way to address this important topic that didn’t mix it with a strange admission about the Avenger’s finances. It does a disservice to the issue to mix it in with a frankly comical and unnecessary detail about their incomes, and we can only hope this issue gets teased out and given room to breathe in future episodes.