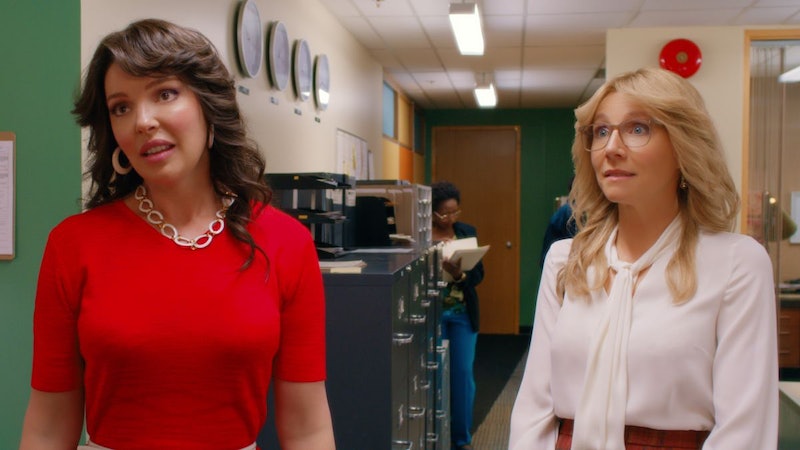 Netflix's Firefly Lane is back, starring Katherine Heigl and Sarah Chalke as two adult BFFs whose 30-year friendship is, unbeknownst to them, coming to its end. Based on Kristin Hannah's 2008 novel of the same name, the series dropped the first half of its final season on Dec. 2 — and as we wait for the second installment (date TBA), viewers may want to jump ahead and learn about the Firefly Lane book ending. Spoilers for Firefly Lane follow.

Firefly Lane opens in 1974, when social outcast Kate Mularkey (Chalke) meets Tully Hart, a cool-girl extraordinaire (Heigl). By the end of the summer, the two have become an inseparable unit known as "TullyandKate." They remain by each other’s side for the next 30 years, until a major betrayal puts an end to their friendship — seemingly for good. Years later, a second tragedy brings Tully and Kate back together again, but by that point they have very little time left to spend with one another.

Even though they're best friends, Kate and Tully live very different lives. Tully is an attachment-less career journalist and the host of a popular daytime talk show, The Girlfriend Hour. Meanwhile, Kate is married to Johnny — an old fling of Tully's — and works as a stay-at-home-mom to her teenage daughter, Marah, and younger twin boys, William and Lucas. Their differences put a strain on their relationship at various points in Hannah's novel, but when a well-meaning Tully ambushes Kate with heavy-handed criticism of her parenting style during a live broadcast of The Girlfriend Hour, Kate ends their friendship immediately.

A few years later, Tully returns from working on location in Antarctica to find a voicemail from Kate: "Hey, Tul. It's me. Kate. I can't believe you haven't called to apologize to me." Offended by the idea that her ex-BFF has called to wrest an apology from her, Tully ignores the message for months, until she takes a second call telling her the awful truth. Not only has Kate been diagnosed with Stage IV inflammatory breast cancer, but she's also undergone every treatment available to her. The cancer has metastasized to her brain, and she doesn't have much time left.

With Kate on her deathbed, she and Tully make amends. They pick their friendship up right where it left off, but their bond cannot save Kate from the inevitable. She asks Tully to watch over Johnny, Marah, William, and Lucas, and dies shortly afterward, as the novel comes to its close.

So, yes, a heartbreaking conclusion awaits in Firefly Lane’s final season. Fortunately, you have until 2023 to prepare the tissues.

More like this
The Song At The End Of 'The Last Of Us' Ep 1 Has A Deeper Meaning
By Sophie McEvoy
'Mayfair Witches' Already Changed 2 Major Characters From The Books
By Grace Wehniainen
Everything To Know About A Potential 'Lockwood & Co.' Season 2
By Gretchen Smail
All The ’70s Easter Eggs You Missed In 'That ’90s Show'
By Grace Wehniainen
Get Even More From Bustle — Sign Up For The Newsletter
From hair trends to relationship advice, our daily newsletter has everything you need to sound like a person who’s on TikTok, even if you aren’t.

This article was originally published on Feb. 7, 2021