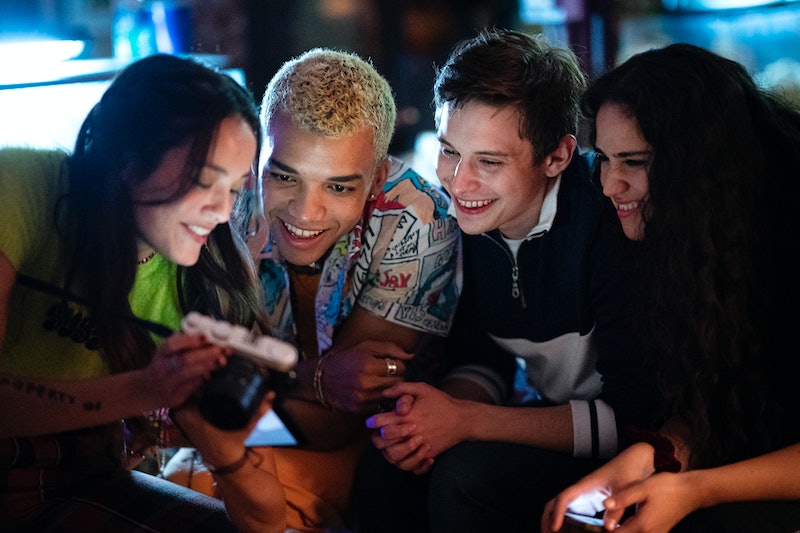 The new HBO Max series Genera+ion tells the story of a group of teenagers exploring their gender and sexuality while growing up in their conservative hometown. Unsurprisingly, the series is already drawing comparisons to HBO’s Euphoria, another teen show that hasn’t hesitated to explore sexuality and relationships — but the new show’s creators believe the similarities only exist on paper. Part of what they’ve done to make the series distinct is build the Genera+ion cast with young stars who feel like actual teens.

“I do think that our show is quite different because it’s a show that really also leans into the humor of what it is to be a teenager and also the awkwardness of it,” Genera+ion co-creator Daniel Barnz told The Hollywood Reporter. “We wanted to make them feel like kids that are out there in the real world.”

Genera+ion is also rare in that it was co-written and co-created by an actual teenager — more specifically, Daniel’s daughter Zelda Barnz, who was only 17 years old when she first began writing the show. When Zelda first expressed interest in writing the story that would eventually become Genera+ion to her fathers, Daniel and Ben, Daniel thought that the process of working on a script would be a fun way to teach their daughter about TV development. But writer-director Daniel and producer Ben never anticipated that the collaboratively written script would get turned into a real series. “We thought this will be fun not only to teach Zelda how to create a TV show but also what happens when people say no,” Daniel said. “It didn’t quite exactly pan out that way.”

When casting Genera+ion, Zelda and Daniel prioritized finding actors who actually looked like they could be in high school, in an attempt to break from the tradition of casting mostly people in their mid- to late-20s to play teenagers. “Watching a lot of teen shows, it can make a lot of teenagers self-conscious,” explained Zelda. “We wanted to make sure that we were casting people who felt like authentic kids and not so much older adults.”

Meet the cast of the new HBO Max series below.

Justice Smith, one of the most recognizable actors in the series’ cast, is best known for his roles in the Netflix series The Get Down as well as the movies All the Bright Places, Pokémon Detective Pikachu, and the Jurassic World series. In Genera+ion, Smith is Chester, a star water polo player and A student who is the de facto leader of the group of high school students. “I was, like, ecstatic,” Smith told The New York Times about being offered the role. “Chester has this bold, brash, all-about-truth, loud, provocative personality that just gave me so much freedom.”

Chase Sui Wonders, who stars as charming photographer Riley in Genera+ion, has also appeared on a couple episodes of HBO’s Betty and in Sofia Coppola’s 2020 film On the Rocks.

Playing Nathan, the twin brother to Naomi who is just beginning to explore and embrace his bisexuality, is actor Uly Schlesinger’s first major on-screen role.

Chloe East has acted in a handful of projects before, most notably the television shows Kevin (Probably) Saves the World and Ice. In Genera+ion she plays Naomi, the mildly self-absorbed twin sister of Nathan.

In Genera+ion, actor Lukita Maxwell plays Delilah, a burgeoning activist at the high school. She previously appeared in episodes of the series Speechless.

British actor Nathan Stewart-Jarrett first gained attention for portraying Curtis in the television series Misfits, and is set to star in the Candyman film later this year. In Genera+ion, he plays Sam, the queer new guidance counselor at the Southern California high school.

Filmmaker and actor Nava Mau portrays Ana, a trans woman whose relationship with her sister has been fraught since she came out, but who is still trying to be a positive queer role model to her niece Greta. “Ana is lively, and Ana is fearless,” said Mau in a recent interview about the series with The Georgia Voice. “I really see her as somebody who has had to fight for her joy, who has had to protect her joy. And I see her as having been triumphant in that fight.”

Martha Plimpton has a long list of acting credits and is most known for starring in the television series Raising Hope and The Good Wife, as well as the film The Goonies. In Genera+ion she plays the mother to twins Naomi and Nathan, who is struggling to come to terms with with her son’s bisexuality.

Prior to joining the cast of Genera+ion as Arianna, one of the “mean girls” of the group who also has two dads, actor Nathanya Alexander also had a role in the film Ocean’s Eight.